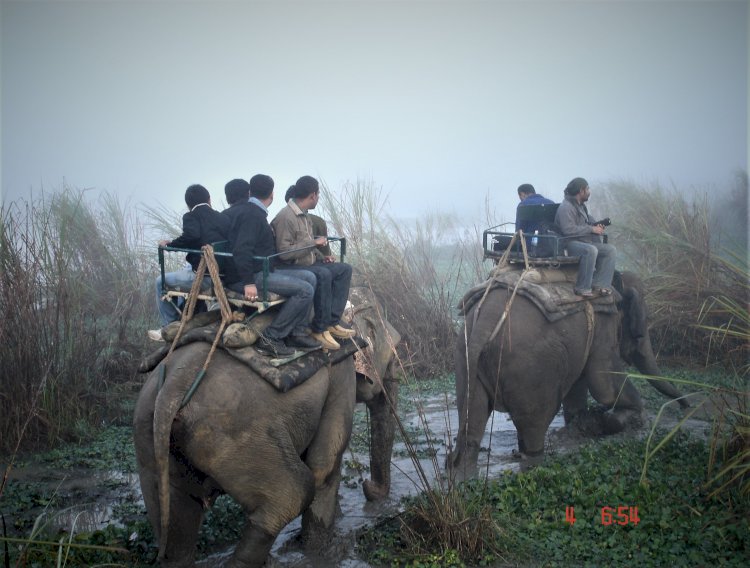 On the Pachyderms at Kaziranga National Park

The thick veil of fog  almost  cleared and the dense evergreen grassland unravalled  as soon as the sun blazed overhead, a veritable ball of fire. We were precariously balancing atop the 55yr old  Bonamala   at  the Bagori   Forest  Range in the  Western part of  Kaziranga   National Park. Our mahout whispered and pointed at a herd of unicorns  grazing  in the slushy wetland. 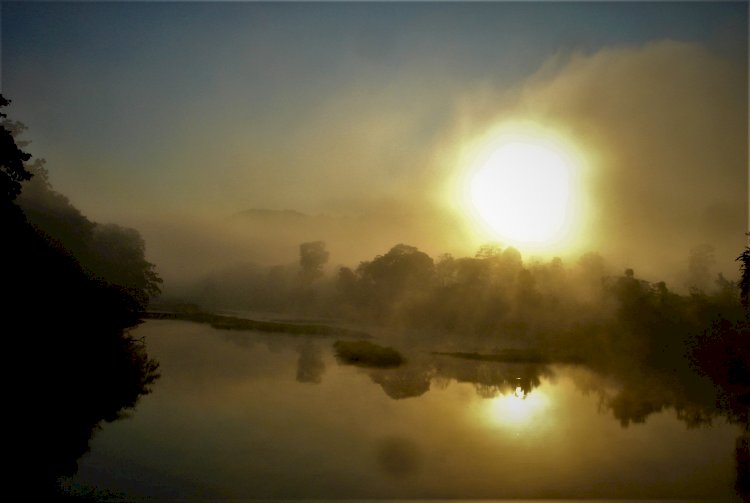 The legendary Rhino land needs no  introduction. However one  interesting story in the  history of  Kaziranga  as a protected area can be traced back to 1904, when Mary Victoria wife of the Viceroy of India  Lord Curzon visited the area. After failing to see a single Rhinoceros, for which  the area was renowned,  Disspointed!,  She persuaded her husband to take urgent steps to protect the dwindling  species. In  1905 Kaziranga was declared  a Reserved Forest . In 1985 Kaziranga was declared a world Heritage site by UNESCO for its unique Natural environment.  Today  it boasts of the highest desity of  Tigers among the protected areas in the world and was declared a Tiger Reserve in 2007.

I have always been fascinated by Kaziranga  eversince childhood. We all know that it is our greatest wetland parks in the country.  Major part of the 430 sq km is only at an altitude of 75  metres  above sea level. Situated between the Mikir Hills and the great  River of sorrow Bramaputra ,The entire  plateau  is often flooded during  monsoon. With most part covered with reeds , tall elephant grass and hence sprouting  out of the  marshy terrain, it is ideal  for swamp loving creatures, Like Unicornis  aka  rhinoceroses !

Though jeep safari inside the park was available. I loved to  exlore  the inner regions upon a Elephant  in the wee hours and for chances of  better photography!.Luckily.We spotted our first herd of Rhinos as soon as we entered the park. The grunting sound drew our attention and we were fortunate to sight a few  very closely.  Our guide sitting next to us  told  that a   Fully grown Adult  can weigh upto a mammoth  2000kgs  and horns normally measure between 15 to 50 cms  in length. Though they have a  poor eyesight, they can charge with a speed of 25 - 30 Kms  per hour and turn back very fast in no time. 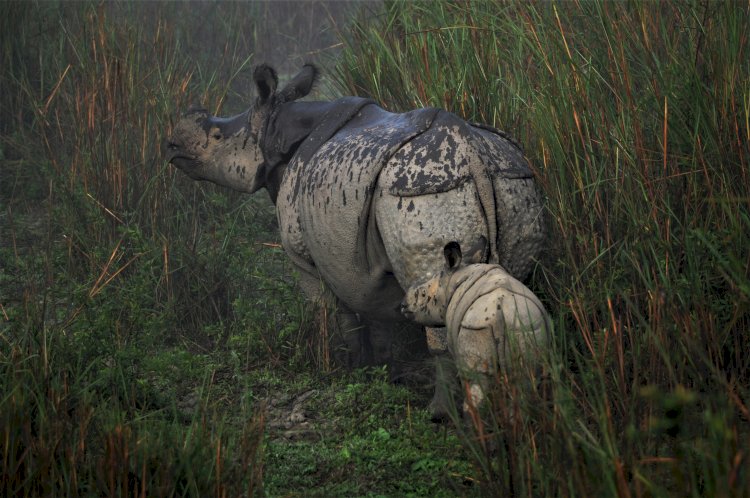 The Zooligical survey of India under the leadership of famous Ornithologist  Salim  Ali have spotted and recordedmore than 480  species of bird life resident and migratory birds in the region.

Kaziranga was once home to seven species of Vultures. At present only 3 have survived  namely Indian  Vulture, Slender billed vulture and  Indian White Rumped  Vulture.

With the other species of Snakes,  Kaziranga is home to two of the largest snakes in the world. The Reticulated Python , Rock Python and as well as the venomous snake in the world, King Cobra.

We encountered  a  herd of Swamp deer in the bushes.We were told that it is the right place to see and photograph large herd of  deer  in the back drop of Himalayas 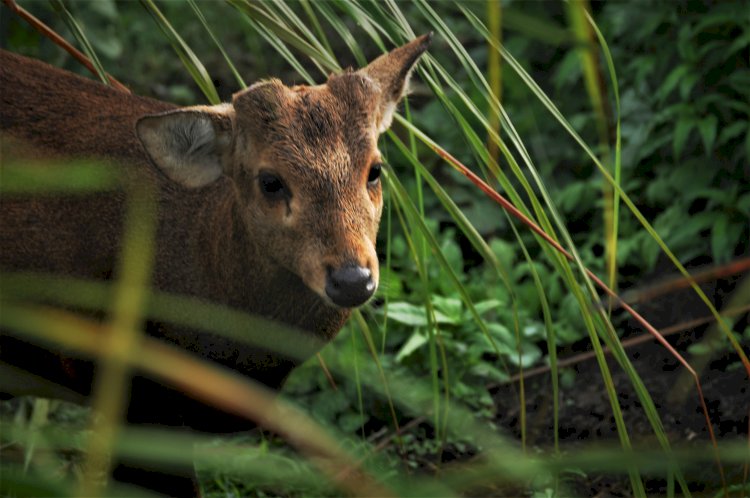 .We were happy when we were photograph these fast moving creatures .We had seen a group of Wild Buffolos  in Namdapha National Park in Arunachal Pradesh  last Year. They were said to be separate sub species and darker in complexion. But to my dismay  I  did not  spot a single Indian wild Buffalo in Kaziranga.

In a short distance  a hefty Rhino moved into the bush with a calf. His head was down when we first saw him ,  but then again turned back looked up doubtfully and gave us a irritable look. Our guide added ‘ It  is a  very humble creature and particularly when a mother is with her calf it becomes formidable’ !. From his memories down the line he explained few  Rhino attacks in past years. Our mahout must have sensed the beast  in anger .He diverted  the route slowly .Our cameras buzzed instantly and then our guide told that we are  finally out  off  the danger zone!.

It was almost  by noon we left the park with one regret .We were  not lucky to spot the striped cat or  sherkhan  in wilderness. The park offered me endless excitement and adventure altogether. I noticed few staff stationed at strategic  points for effective patrolling and keep a check on forest fires..All these efforts have culminated  in a proper environment with an even distribution of wild animals and to sight wildlife easily in its natural habitat….!