The place is called Chao Mae Tuptim Shrine, simply Tuptim Shrine or more familiarly it was a Penis Shrine. Situated at the Swissotel Nai Lert Park, it is certainly less known to tourists. 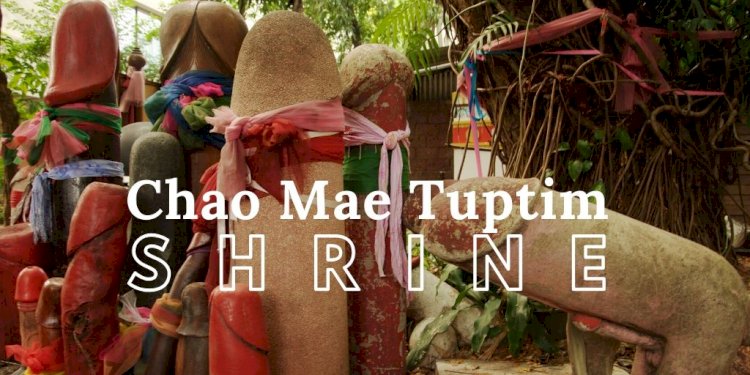 Phalluses Worshipped at the Shrine

Our tour of Bangkok had come to an end, few of the members desired to go for Chayo Prayag cruise in the evening. My friend Arun was hell-bent to take me to a temple called Chao Mae Tuptim. The name sounded unique and agreed to accompany him. We started around 4 pm from a place called Soi Sukhum vit 11. The place we were heading to was just 5 km as per google maps. In a shortwhile we were in front of a huge 4 star Swissotel.  We walked past the security guards and onto the grounds of the Nai Lert Park Hotel (formerly a Hilton, it is now a Swissôtel). Soon unusual mushroom-like structures sprouted out on the ground drew my attention, decorated with jasmine flowers.

I moved a little further with curiosity to know where we had landed!

Surprisingly, we were the middle of giant phalluses

The place is called Chao Mae Tuptim Shrine, simply Tuptim Shrine or more familiarly it was a Penis Shrine. Situated at the Swissotel Nai Lert Park, it is certainly less known to tourists,  as there isn’t any other popular attraction nearby.

No one knows about the real beginnings of this temple or the phallic offerings at the site. My friend who had visited earlier pointed at a ficus tree in the corner and told that a certain tree goddess known as Chao Mae Tuptim resides in a towering Sai tree in the area.I could also notice cute kids clay structures which were lively  as playing in a creche or kindergarten

Being more curious I walked along with the lawn. A plaque near to the shrine read that

The origins of Chao Mae Tuptim are uncertain. It can only be recalled that a spirit house was built by Nai Lert for the spirit who was believed to reside in the large Sai (Ficus) tree.

The basic offerings are fragrant wreaths of snow-white jasmine flowers, incense sticks, pink, and white lotus buds. Chao Mae Tuptim has received yet another, rather less conventional kind of gift, phallic in shape, both small and large, stylized, and highly realistic. Over the years they have been brought in their thousands and today fill the area around the shrine. Confronted by the extraordinary display the shrine has automatically been concluded to be dedicated to fertility. 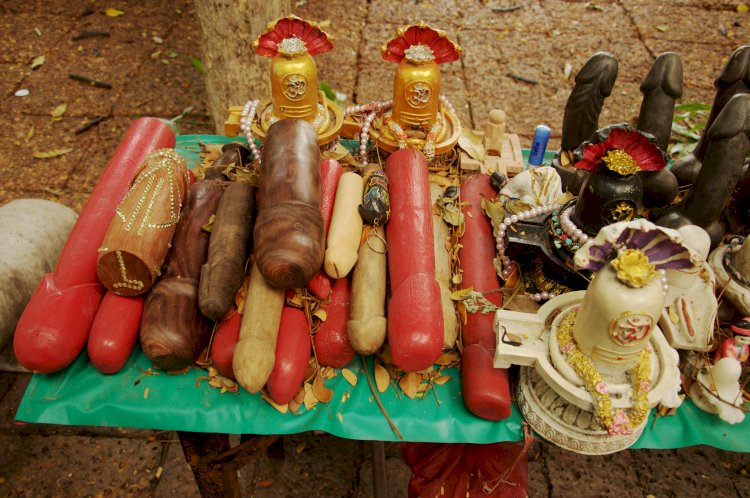 The words on the plaque only give us some insight into folklore that has woven up around this particular shrine. A business called Nai Lert (1872-1945)of Bangkok was the Landlord of this place and owned a lot of Surroudning land.

One story going like this, Nai lert found a spirit house floating in the Khlong canal of Chayo Prayag popular tourist destination today. He fished it out and placed it in his property. 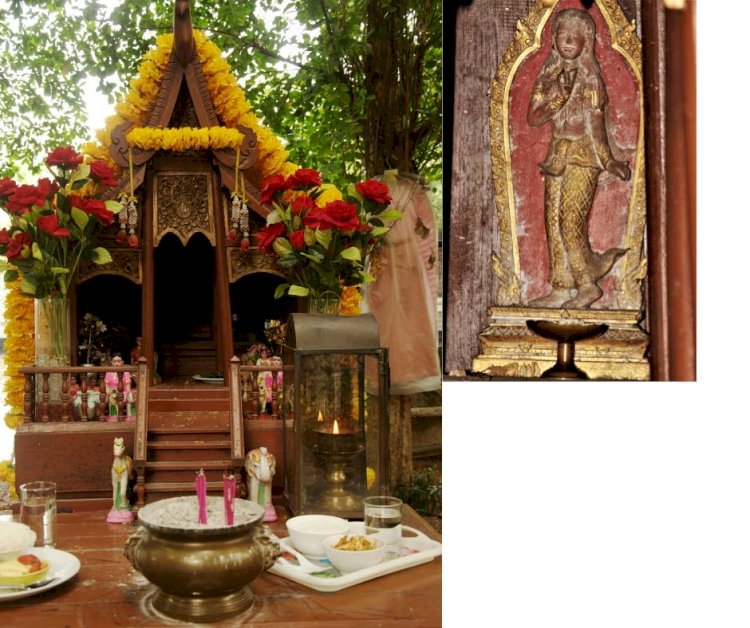 One lady who made offering to god, conceived after her visit. From then the news spread like wildfire and before long the shrine was attracting Childless women who wanted to conceive. Phalluses or Lingams were brought as a traditional sign of fertility and adorned with Jasmine, lotus buds, but the shrine also has an assortment of other items too including miniature figures of elephants, horses and dancers.

But few having sharp sight will also notice that beyond the variety of painted, decorated Penises are more feminine offerings including beads, combs, hair-bands, and dresses which are all there offered as a token of respect to  Chao Mae Tuptim.

It  is interesting to know that Thailand predominantly being a Buddhist country, it is also a country where Hindu Gods such as Ganesha, Garuda, Hanuman and Vishnu exist and worship of spirits co-exist alongside Buddhist practices.

Few questions started haunting me as to why the lingam (phallic) offerings changed the focus of the shrine?

I got a convincing reply that ‘ phallus or lingam is a symbol of the Hindu god Shiva ‘ and is sometimes worn by Thais, men and women, in thai community, the form of ‘palad khik‘ are not seen as obscene, referred as sort of lucky charm which may be worn discretely. This phallic symbol is associated with fertility and virility, but they also have a reputation for protection and for bringing good fortune so you do occasionally see lingams in small shops in Thailand and owners having a business.

However, the hotel doesn’t openly advertise the Chao Mae Tuptim Shrine or found on the tourist map of Thailand. Quite a few foreign visitors are welcome to visit.It shouldn’t be forgotten that this is a shrine and as such should be treated with appropriate respect because locals do believe in God and have faith.

Few believe that Chao Mae Tuptim is the goddess of Seafarers, who lived in the south China sea. She helps the fishermen, sailors in distress, caught in the sea.To my dismay, I found an idol of mermaid resembling a fish inside the wooden shrine.

No board, No sign, still those who are keen and having faith in spirits with no obscenity, can visit this shrine. As soon as you reach the Hotel premises don’t forget to mention the name Chao Mae Tuptim the guard will direct you to shrine. Without any entry fee…!

It was already 7 pm by the time we stepped out. We straight away headed towards the BTS skyline station along Thanon Witthayu (Wireless Road) to catch the next train to MBK Mall for some shopping. 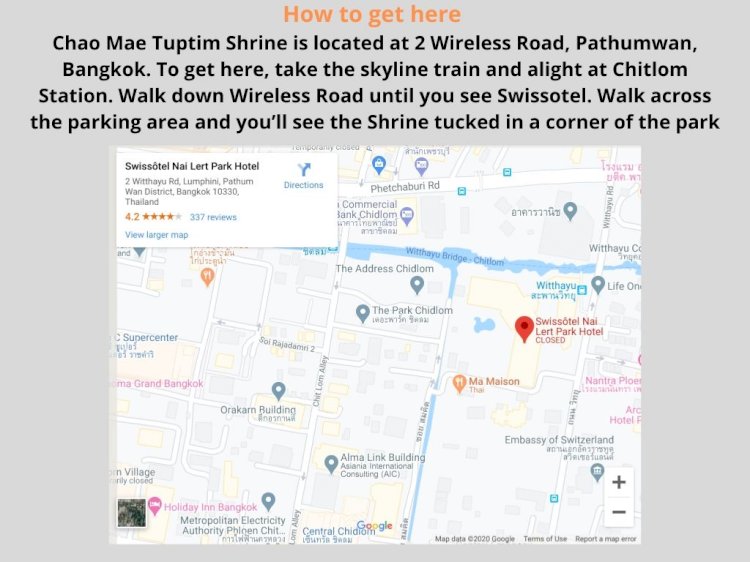