Shrikhand Mahadev Yatra (5,186 m) and Kinner Kailash Yatra bo5100 both are abodes of Shiva, spiritual yatras in Kullu and Kinnaur district of Himachal Pradesh. It is a challenging trek for both trekkers and religiously inclined 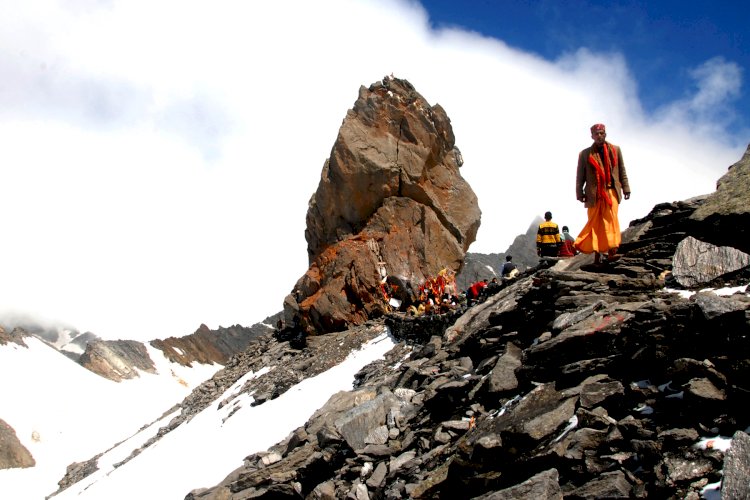 Hills and Mountains have a special significance in the Himalayan region. Mountains have traditionally been regarded as abodes of gods. Mountains are also held sacred due to their association with deities, mythology, and legends.

Climb to the top

Sriikand Mahadev is one such revered mountain peak in Himachal Pradesh about which not much has been written. The Yatra season had begun and the very thought of proceeding to Srikand Kailash is a call from within. It is situated at 18,500 feet above sea level. The journey is usually undertaken to coincide with the Ashada Poornima or, full moon day of June - July as per the Hindu calendar

After a quick dip at the hot springs at Jeori, we reached a small hamlet called Jaon, the starting point of this trek. From here Shrikhand Mahadev is a three-day trek. After passing through another small hamlet Singh gad, and trekking through dense pine forests for 6 hrs we reached our first camp Tharchu at 11500 feet.  Here the Samiti arranges langar and offers free food and stays for the devotees.  The next day the trek resumed towards Kalidhar, which is at a distance of about 3 km from this point. After walking for about an hour one can see the last of trees on this trek, as after this point you will not find any trees. Vegetation starts decreasing from this point.

After a steep descent and crossing hills in an up and down manner, there was further crossing of a few glaciers and swift-flowing streams.  Then we passed through a campsite called Khunsa Bhimdwar (according to the locals Bheem had killed a demon Bakasur here; the blood of Bakasur has made the spot permanently red). People usually stay at Bheemdwar for overnight to acclimatize body here and charge up for the next day’s difficult trek). We reached Parwati bagh in the evening and rested. The route is dotted with multi-colored flowers, herbs, and medicinal plants.

The next day we started early.  After walking through boulders and climbing gradually we reached Nain Sarovar, which is believed to be made up of the tears of Goddess Parvati. I was mesmerized by the beauty of this place surrounded by glaciers.

After an additional two hours  of arduous climb over the steep ice slopes we reached Bheem Bahi where I found rocks with some work. It is believed that these sculptures have the writings of Bheem himself. This area is mostly covered with fog and if you are lucky you may get a chance to sight many of the rare creations of God around. After filling water and another 2 hrs of climb over the giant boulders brought us to the tip of the peak. 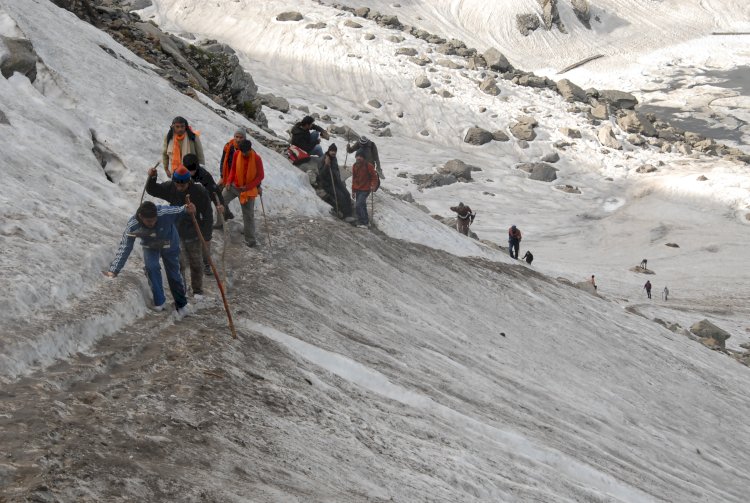 The whole region was covered in mist and I could see the outline of the monolithic rock of Sreekand Mahadev 72 ft in height at an altitude of 18,500ft. As per legends, demon Bhasamasur did very hard penance of Mahadev here. In return Bhasamasur is said to have got the Bhasam Kangan as a boon from Mahadev as an appreciation for his penance. Lord Mahadev had said that the person on whom this bhasam would be used will be destroyed.  With his ego puffed up, Bhasamasur had tried to use the same bhasama Kangan on Mahadev.  Bhasamasur ran behind Lord Mahadev and the Lord is said to have disappeared in a gufa (cave) [it is called Devdank today and is nearer to Nirmand village in Kullu distict] and appeared on a hill. That hill got khandit and due to this that hill is worshipped as Shivalingam. It is known as Shrikhand Mahadev

After  paying obeisance to the Lord, we left the place with a bunch of wonderful memories .

The thrill of the trip into Himachal Pradesh is a kind of its own. But when this adventure is filled with religious fervor and faith it transforms into a double advantage. There are some such trails traversing through which is not within the reach of everybody. These journeys could be completed by only those persons who have within them the deep faith, courage and ardent love for nature.

After driving through Rekong Peo, the district headquarters we reached Kalpa, at 2758 m in the evening.  My next destination was to Kinnaur Kailash,  a monolithic spire situated in the Kinner  Kailash range. The next day after crossing the Sutlej river at Shongtong, we reached Thangling village, the starting point of the trek. From here Shivling spire is a three-day trek 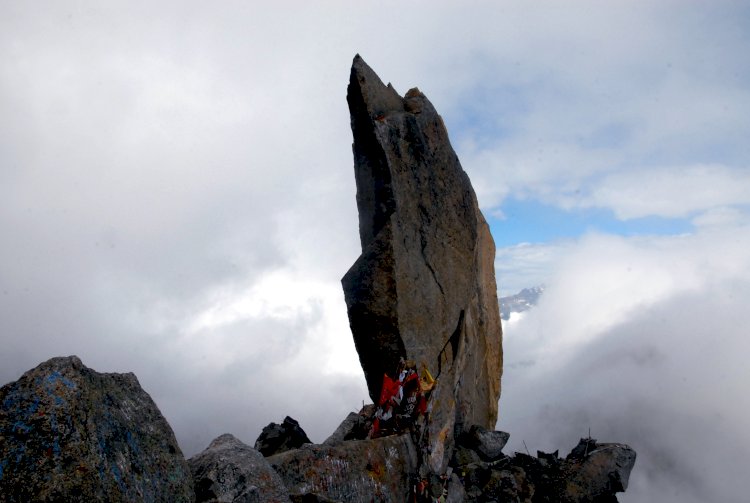 The initial climb was through Apple, Apricot, and Plum orchards. I started the trek with the assistance of a local guide. After crossing a stream and a steep uphill climb through a pine forest reached a Natural cave along the steep ridge which served as a shelter for the night 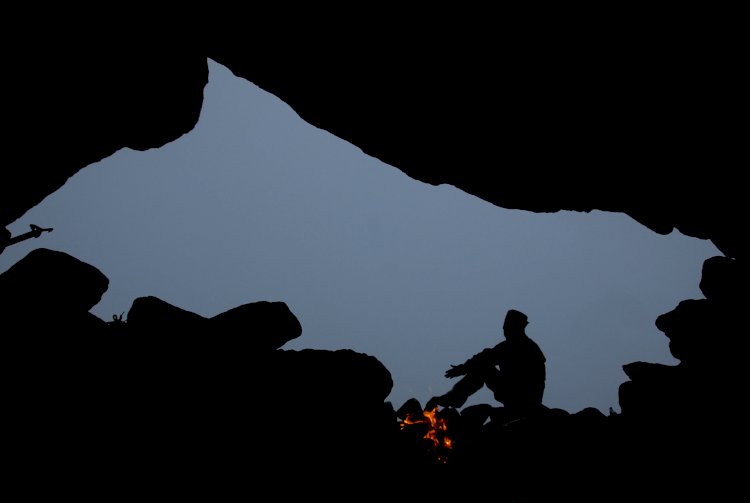 The next day I started in the dark to reach the Shiva Lingam in the Kinner Kailash mountain range. After crossing numerous broken glaciers along the route, at halfway we came across a  small glacial lake amid rocks called Gaurikund. After paying respects to the goddess here we resumed our journey.  This was more arduous and even dangerous. The pathways were zig-zag going through twisting and turning rocky spaces. Difficulties are bound to be there while stepping on the huge rocks. Bad weather and fog can ruin the path causing stones and boulders to fall down on the passageways.

The rocks seemed to have fallen down here and there and accumulated after breaking up from the nearby mountains. This portion of the journey is more adventurous and gives off the view and miracle of nature of an unparalleled kind.

After jumping from one rock to another, and a steep uphill climb, I reached the pinnacle and was in front of the monolithic spire,  about  70 feet high, rising as the enormous Shiva lignum at an altitude of 18,000ft. It seemed as the unbreakable symbol of faith for the residents of ‘Kinnaur’ - standing erect at such a height is this lingum: a miracle of nature and an emblem of devotion. It is said that the spire changes its color with sunlight.It almost seemed I was taking a walk above the  Clouds  ... and took back a good measure of satisfaction in my heart!