A trek to Meesapulimala - To the Mountain of Whiskered Tiger the 3 rd highest peak of South India en route sprawling tea plantations, forests & undulating hills. An adventurous jeep ride to Rhodo Valley followed by moderate trekking to the top. 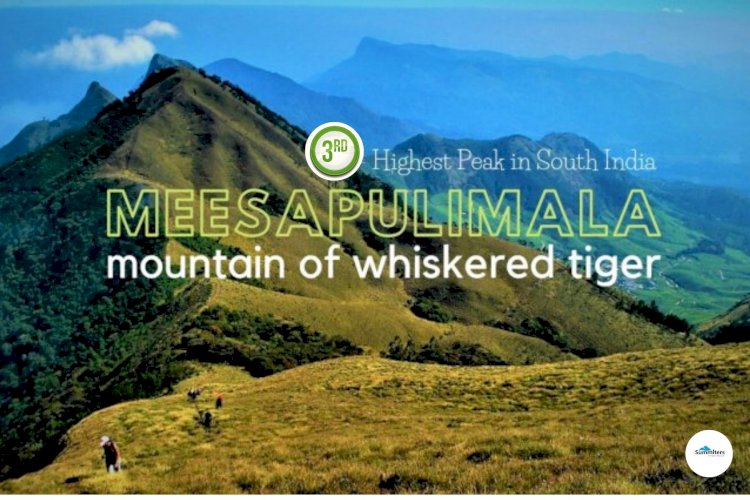 View of Meesapulimala peak from grasslands

Having extensively explored almost all the trekking trails and peaks in South India, my eyes were set on Anaimudi  Peak Altitude  2695 m  8842 feet  – The Highest peak in south India. Tried all the best possible ways to gain entry and hike beyond Eravikulam National Park as Surmounting the Elephant was a dream of my lifetime. Being an eco-sensitive area and home of  Endangered species  - Mountain Goat  Nilgiri Thar Nilgiritragus hypocris my proposals were denied by officials and Permits were on hold. It was on 12  Dec 2011,  managed to visit Munnar and thought of directly seeking permission with some arrangement and completing it was the final plan.

On one fine morning, myself with my close friends and nature enthusiasts landed in  Munnar – a popular hill station in Kerala. The shocking news came as lightening, that state bundh is being enforced because of the Mulla Periyar dam dispute between Kerala and Tamil Nadu.Poured cold water on all my plans!

All my effort went in vain, I had an intuition that it would be difficult in this grim situation to get permission and since then pursuing Anaimudi was like going on a wild goose chase still remained as a dream.!

What next was our plan?

Instead of hearing slogans and spending time in the midst of rallies, we thought of spending fruitfully in some offbeat place, amidst nature. We did not take more time to decide, without  2nd thought . in the wee hours we headed to Rhodo Valley and decided to trek Meesapulimala Peak – The  3 rd highest peak in south India.

A paradise less known in disguise came in as a blessing.!

Meesapulimala Peak Trek is possible only after permission from forest department.

The forest officials agreed to the request and granted permits for the trek.The normal process is registering with KFD website.The trek to Meesapulimala cannot be done as a day trip from munnar.One need to stay at one of the accomodation options provided by the department and trek.We had three options before us to choose. 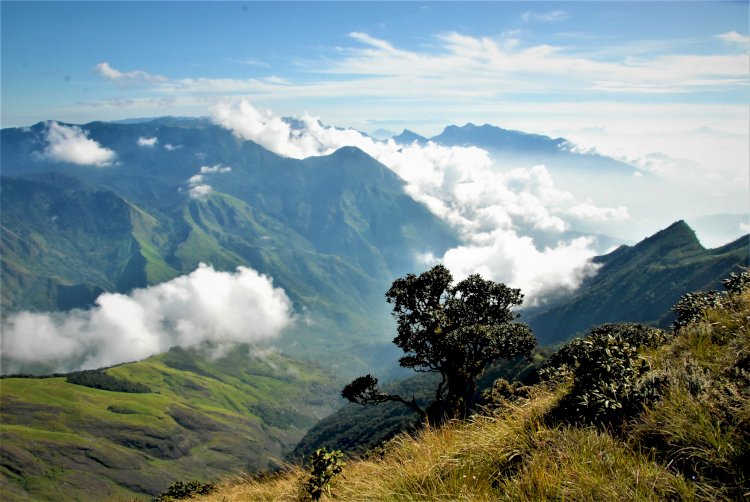 We straightway headed to the KFDC office located about 2 km from the main town by our own Tempo Traveler for permits and information about reaching the Base camp.It did not take much time to finish formalities. We were advised and given directions to reach Base Camp at 2:00 pm after lunch.

Since we had enough time, we finished the morning ablutions and refreshed at a hotel in the Munnar town. We had a sumptuous breakfast at popular Saravana Bhavan. We spent some time at leisure visiting Matupetty dam and Lake and Pallivasal in Munnar. We had an early lunch and boarded the Jeep which was arranged in advance to reach Base camp.

Leaving behind the hustle-bustle of hill town, we were on the hilly road. Every bend was picture-postcard views. We stopped at few places to savor the beauty of hills and dales enroute and the drive was very cooperative.As we climbed higher and higher we could feel the variation in altitude and start feeling cold. The route was picturesque and passed through tea plantations and view of hills. 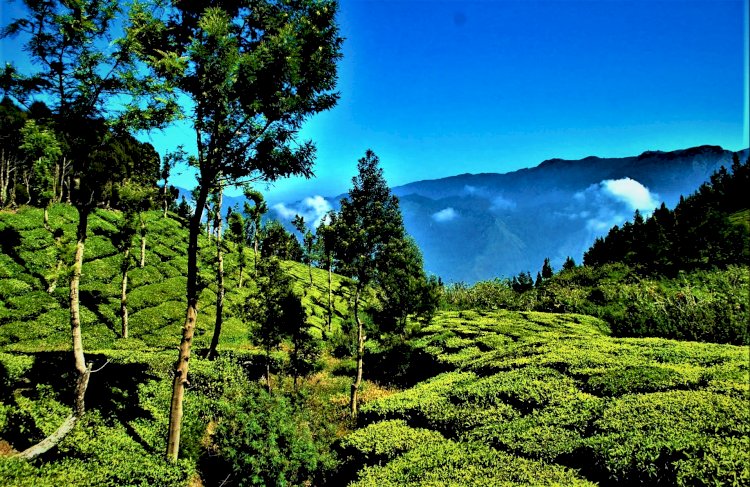 The last stretch of about 2 km was steep, the road really bad. Since our jeep was of 4 *  4 wheel drive we enjoyed it. Other vehicles other than jeeps literally can't go beyond a certain stretch,  to maneuver and risky too. Finally, after  90 minutes we reached the Basecamp. 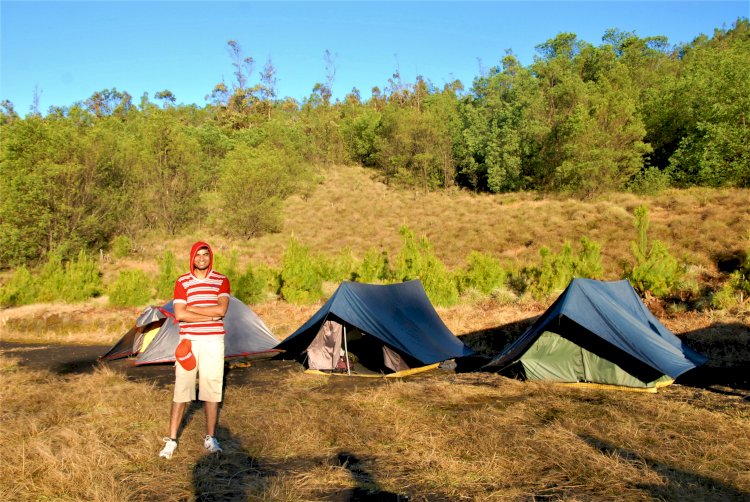 Base Camp was strategically located at a picturesque location, a small patch with tented stay with makeshift toilet facility. Foldable tables and chairs. A campfire place. A simple slice of heaven. What else we can ask for .....!

We were served hot tea, Kattan Chai - Kerala tea with hot pakoras. As the sun went down we felt severe cold as it was December. Few members started sharing experiences of cold with Bali pass, Rupin pass, and Winter treks Kedar Kantha We Campfire kept us warm and snippets from the guides were interesting. We enjoyed the typical Kerala style dishes served. Both veg and Nonveg. We did a bit of stargazing and were awake till the fire ceased.

During tea time we discussed with the forest guide about the trek schedule. We were given 2 options to choose

Since all were seasonal trekkers, desired to trek and we opted for the 1st option.

The morning mist gave way to clear skies, we set out after breakfast. The initial part of the climb to Meesapulimala was steep, but the refreshing crisp of morning air and the breathtaking views were making us stop again and again. We made up to the Rhodo Mansion camp quite easily. We crossed the picturesque Rhodo Valley dotted with rhododendron trees with crimson red flowers in bloom and criss-crossed by perennial streams. The Nilgiri rhododendron that is endemic to the Western Ghats, with its thick leathery leaves, looked gorgeous among wild golden grass and pine trees. 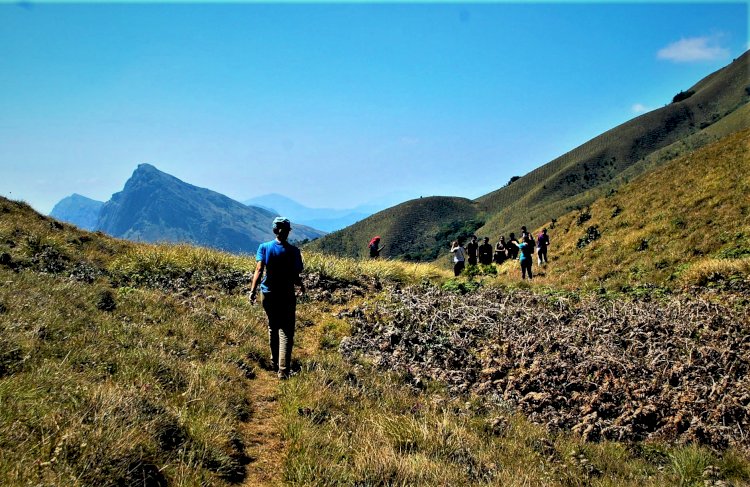 From the Rhodo Mansion camp, we started the second part of our ascent. The terrain immediately transformed to high-altitude grasslands with wildflowers in myriad colors. With the help of the guide, we sighted a herd of Nilgiri tahr grazing leisurely. One of them posed for the camera shyly and animals quickly made their way down the steep valley as we approached closer. 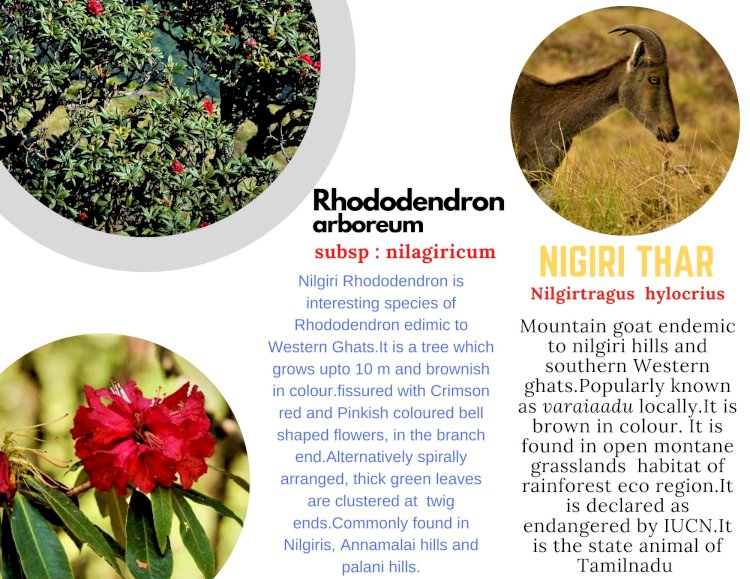 We were surrounded by hills and passing clouds seemed to like kissing the mountains and it was a great feeling. The initial stretch took us on a steep descent. Later we had to cross a series of hills on an undulating path. In front of us was the Meesapulimala peak rising above clouds. The sun was behind the peak and  Meesapulimala being the highest peak in the region we were not facing direct light and the whole valley was a perfect silhouette. The sun suddenly emerged from the tip of the peak and lit the whole valley. A small lake at the base of the mountain looked spectacular and all on a sudden glittered in the sunlight. We could see Anaimudi peak - The highest peak in South India. As the name mentioned it looked like a perfect Elephant head. in the distance, it as playing hide and seek covered with clouds. After a steep ascent on the ridge, we reached the peak.

Standing at the highest point and we could have a  360 deg view of surroundings. Guide pointed at the Kollakkumalai Tea estate in Tamilnadu, which is another route for

Meesalulimala.Even mentioned that Entry from here is restricted. We could have a clear view of Top Slip, Anayirankal dam backwater, and Munnar town from here. 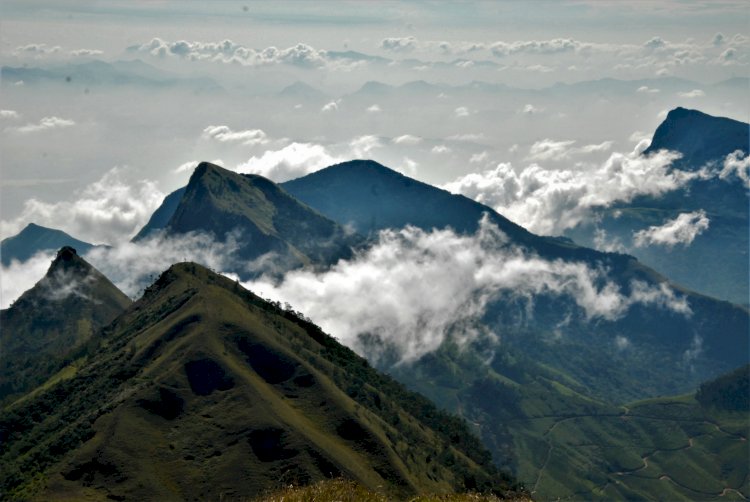 After spending some memorable time appreciating the views. it was time to descend, guide during return took us through a different route passing through a small water body. We found few scats of animals and felt that after dark, that this region to favorite hunting grounds for cats. Our guide even mentioned of sighting a tiger during in days of patrolling in hills. We finished the packed lunch bit late by a small stream and relaxed for some time. After thanking Guide and reached Munnar by evening. 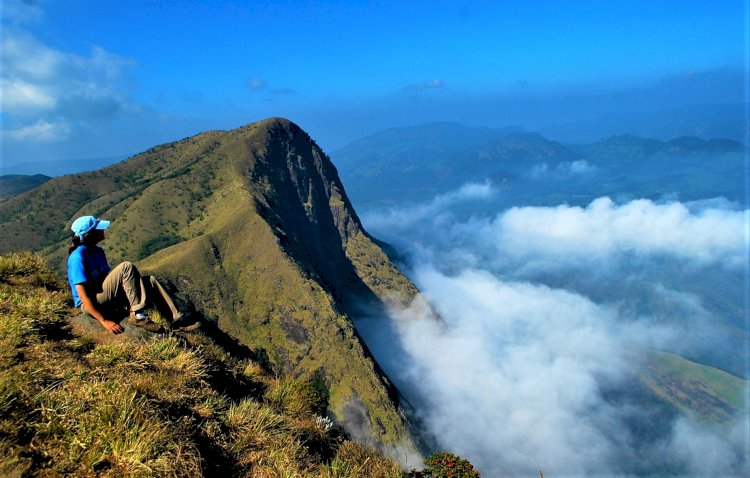 Few things you need to know

The services of KFD are of par excellence. The staff is friendly and helpful Those desiring to visit Meesapulimla can directly contact them. Summiters regularly conduct trek to Messapulimala from Bangalore. It is an ideal safe weekend getaway and camping location for families and Children.