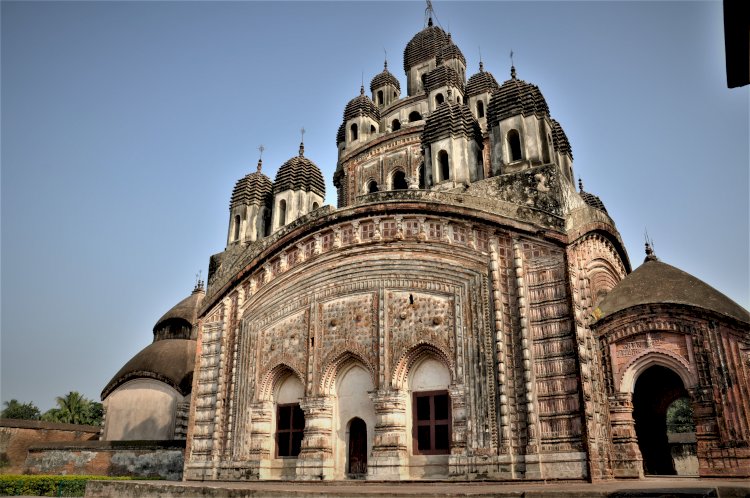 A three-hour journey by local train from Kolkata, the present capital of West Bengal and the erstwhile imperial city of the British, lies another place known for its architectural glory, albeit in a different way. The ancient temples of Kalna,originally known as Ambika Kalna are named after the reigning deity of the area. Situated in the district of Bardhaman, they are like no other and a testimony to the diversity of India’s heritage. A peek into its history reveals that in its heyday, Kalna was a flourishing port in Bengal on the banks of river Hooghly. For centuries, the river served as the channel of communication and trading between the cities of northern India and Bay of Bengal. The town’s history dates back to the Gupta Dynasty which ruled between 3rd and 5th century AD. One of the few attractions that retains this town’s glory is the rich terracotta temples present here, but it is a pity that they are not found on the tourist map of Bengal.

Centuries ago, the Maharajas of Bardhaman desired to construct temples of goddess Shakti for the Vaishnavate, Shaiva sect. They were in an unusual dilemma — there was just no stone available in Kalna that was suitable for construction or any any type of intricate work. However, the artisans found a unique solution they first made a model with baked bricks that were abundantly available. Next, they made tiles of various forms with terracotta with images from ancient Hindu epics and  Krishnaleela and pasted them on the wall of the temples to create what became the famous terracotta architectural style. “There are about 10 to 15 temples spread across in this area,” said a rickshawallah as soon as we alighted the train.We did not give it a second thought and stepped into the rickshaw to explore the place. Half an hour of furious peddling on narrow roads, followed by potholes, we found ourselves at the Nabo Kailas or 108 Shiv Mandir. Though not a terracotta temple, it is said to be a major tourist attraction. Built in Atchala style of architecture in 1809 AD by the then Maharaja Tej Chand, it comprises of 108 Shiva temples arranged in two huge concentric circles -the bigger one with 74 shrines and the smaller with 34 shrines. 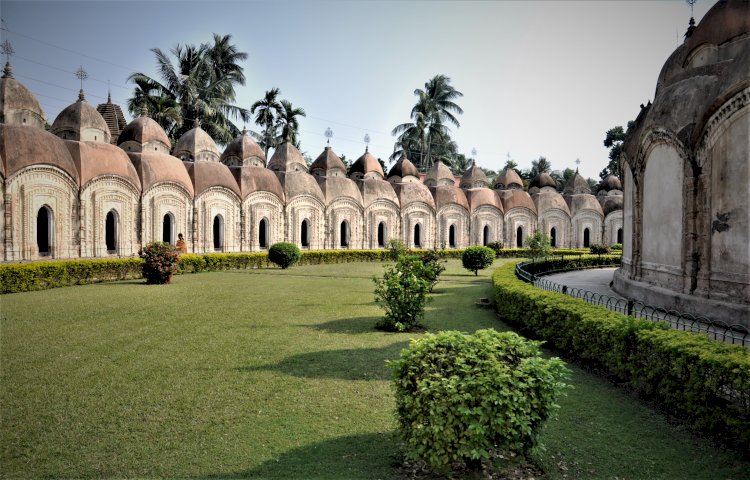 It was constructed as a thanksgiving present to the Maharajas victory in the privy council against the vile conspiracy of the Governor General Warren Hastings, who planned to dispossess him.

Due to its ingenious planning, all the Shivalingas can be seen standing from the centre of the temple complex. Just opposite to this structure is another temple complex — the Pratapeshwar Temple constructed on a raised platform with steps leading to the entrance is exquisite among all the other temples here. It was built by the widow of Raja Pratapchand in her husband’s memory in the year 1849 AD. The shrine has a unique roof design with four doorways intricately decorated with the finest specimens of terracota art depicting episodes from the great epics Ramayana and Mahabarata. The outer walls of the temple reveal various art forms portraying musicians, nymphs, warriors mounted on horses, elephants, flowers,men and women in different moods and postures. Also, the filigree work on the doorway is an extraordinary feature. 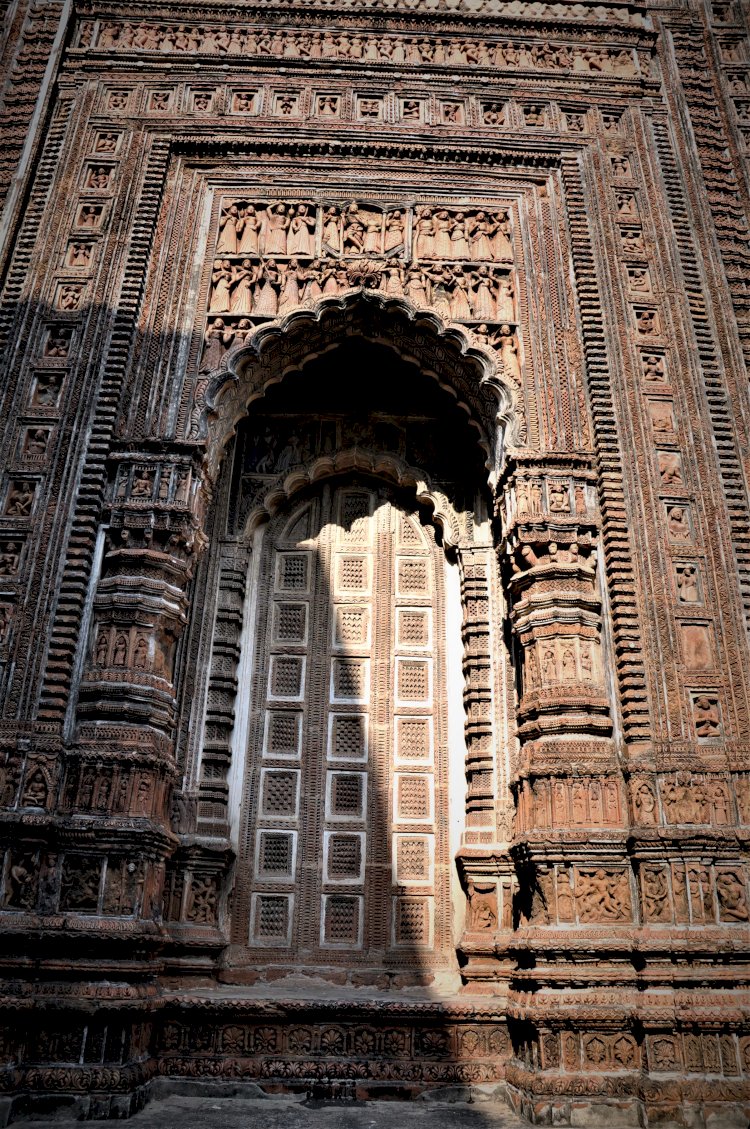 Just a stones throw away is the Lalji temple. Built in 1739 AD by Rani Brojo Kishori, it is different in terms of style. is a three storeyed structure with 25 steeples. The cornices in each tier are decorated with exotic floral designs and figures of birds while its outer walls have plaques with varied designs.

The temple is said to be the oldest in the complex. It does not have a sanctum sanctorum, but like a mosque, there is a single chamber which is entered through doors with cusped arches. Here lies the idol of Lord Krishna, which is worshipped till today.

Just diagonally opposite Lalji temple is Krishna Chandra temple, which is another important attraction. This ancient and charming temple structure is said to be built between 1751 and 1752 AD. At the extreme end of the temple is a porch with three arches that have extensive geometric shapes and scenes from epics Mahabharata and Ramayana. 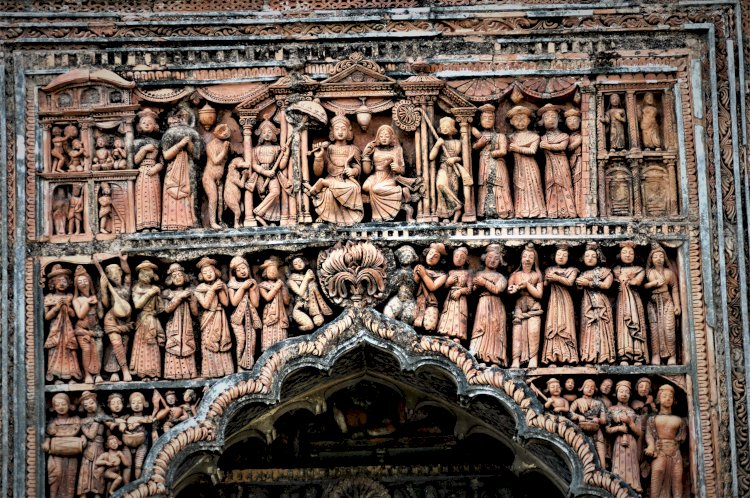 After having a decent Benagli thali at a road-side dhaba, we drove down narrow streets, which brought us to the Siddeshwari Kali Temple. This structure is said to be established by Rishi Amburish in 688 AD — first time the goddess was worshipped through the ritual of the earthen pot (ghatt). According to the priest of the temple, years ago, sacrifices of human beings to the altar of the temple was a common practice. But at present, this has been replaced by sugarcane, gourd among other vegetables and fruits.

The goddess here is worshipped during the new moon in the month of Karthik. The curved steps signify nine planets and five tantric cults while the calm serene surroundings with lawns and colourful flowers in bloom add beauty to the place. The temples are well preserved and maintained by the Archaeological Survey of India. Other temples worth visiting nearby are roofless Ras Manch, Maijir Bari , Radha Rani, Proja poti Bari, Gopal Bari, Anantabasudev and Pathuria Mahal Ghat or the bathing ghat.

By late evening we paid the rickshawallah and bid goodbye to the temple town of Kalna as it was time to head back to the concrete jungle.