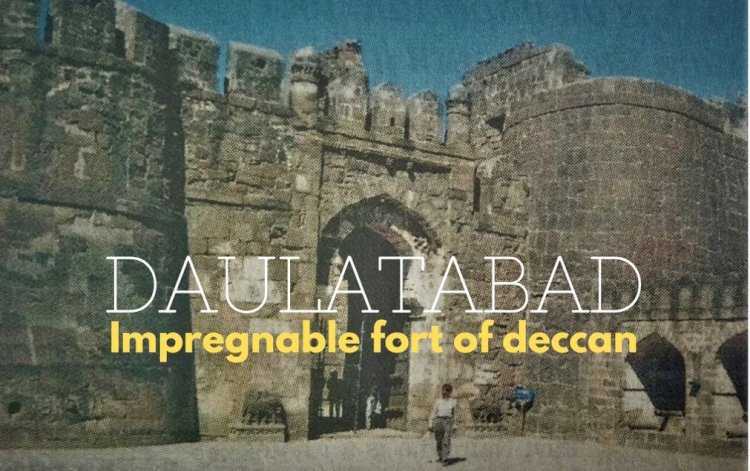 King of Indecision Mohammad Bin Tuglaqs indecisive streak touched its zenith when he moved his capital from Delhi to Devagiri and back to Delhi about 8 centuries ago.Devagiri better known as Daulatabad , is a fort city with centuries old checkered history.

Situated just 15 kms north - west of Aurangabad, it has one of the most magnificient fort complexes in India.Perched strategically on a hilltop , it is pyramidical in shape and visible from a good distance. It is marked by a hill which rises 600 feet above the plains.Its artificiallly excavated sides create a rocky cone which serves as a landmark.The history of Daulatabad dates back to 12th century when it was headquarters of of Yadavas

The Daulatabad fort, considered as one of the oldest existing forts of the Hindu period, was built in 1187 by Bhillama Raja , Initially , it served as a fortress for the Hindu kings of the region when it was called Devagiri  before it fell into the hands of Muslim Kings.

Mohammed Bin Tughlaq , after ascending the Delhi throne,ordered his capital to be moved to a safer city.But , even before he could reach Daulatabad , he lost a vast portion of his entourage who were unable to stand such a long migration. Instantly the sultan regretted his decision and ordered the whole mass of migrants to move back to Delhi.

The most remarkable feature of this fort is its defensive system .  It is so perfect that the series of fortefied walls, artificially sloped watch towers and cannons can be seen everywhere.A complicate series of defenses made this fortress impregnable throughout the medievel times.

Around this fort  is a 6 km strong stony wall.This outer wall and several inner walls have heavy iron gates. There is only one access to this fort facing east.The first gateway leads into  the enclosure which has on the left a huge water tank that could provide water for the army for about 6 months if fort was sieged by the enemies.

Going further up there is an ancient temple dedicated to Bharat  Mata ,which is the only one of its kind in the whole of India.Originally a Jain temple , it is now converted into a Hindu temple.Towards the right of it is the huge Chand Minar , the most prominent structure within the fort.This served as an effcient vantage point to look out in all directions and issue orders from the tower. This was built much later and is about 30 m high with 3 circular galleries, this had a defesnive and religious role in the fortress. Installed by Alladin Bahmani  in 1435 as  Nizamshahi  memorial tower, this is the second loftiest tower in India, the first being the Quatab Minar in Delhi.

A  few steps further leadup to Chini Mahal .Built with the help of blue porcelain tiles ,this palace was more  or less a prison, something to house VVIP  prisoners.Tanashah and later on Sambhaji were kept as prisoners here.The last Gloconda king was also kept here for nearly  13 years.A few steps further is a large gun Mendha tope .The 15 feet and 14 tonne artistically carved canon lies right at the top of a round high bastion.It has a Rams head designed at one end and hence called mendha tope.

Beyond these are the later constructions such as the moat,40 feet deep with a draw bridge.The water level in the innermost tank could be controlled and during an attack the water level would be raised to submerge the causeway across its entrance.If the eneamy crossed the bridge he gained access into the citadel or Baradari .This moat was originally infested with poisonous  snakes and crocodiles to enhance the danger to the eneamy.Here begins the original Devagiri citadel.The solid rock is scraped to a height of about 76 m.From the moat a narrow entrance leads upwards for one to climb a subterranean passage over 50 m long.

It spiral around the hewn steps shielded by the rocky mass overhead.The pitch dark tunnel known as Bhool Bholayya was the only route to the citadel it was full of danger and the soldiers would hide in the niche of the rocks to cut down the intruders.In the olden days it could be easily barricaded at its far end.If the enemy came in large numbers the whole tunnel would be filled with smoke and turned into a gas chamber by lighting the fire in the brazier.The great heat blew into the passage due to an effective suction device ,resulting in the passage to be altogether blocked.

The tunnel forked out into three passages .Towards the end only one of the passages led to the outside ,the other two led to traps which could inflict a horrible death on the unwary.The enemy was in a dilemma as to which one to take because only one of the passages led to outside.After emerging out of the tunnel the enemy had to overcome many more obstacles to reach the citadel in which the king and his nobles resided.