Finally, I was able to fulfill my long time desire of completing the trek to Everest Base Camp in my must-do treks in the bucket list. During the return, I had health issues after I reached Namche Bazaar. I spent money on medical aid and treatment. I felt that I should have gone for a insurance. 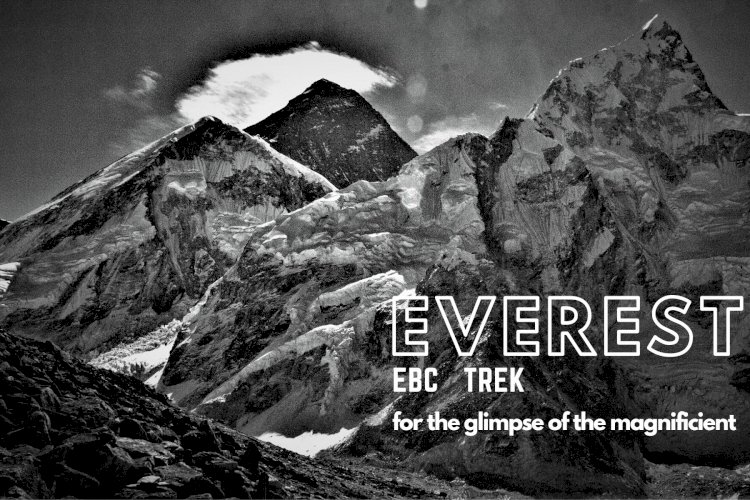 For the past several years, trekking to Everest Base Camp (EBC) has become one of the most prominent trekking destinations not in Nepal but also all around the world, so every trekker has a dream to trek EBC at least once in their lifetime. I too was intrigued to explore this region and doing so would be a dream come true for me. So, when I made up my mind to go for EBC, it was like putting up my strength, both physical and mental, for a rigorous test because EBC was actually going to be my first ever high-altitude trek. Trekking at such a high altitude is not an easy task, I needed to prepare not only physically but mentally too. Going through past experiences of trekkers of EBC, I got some recommendations on how to plan a proper diet and fitness regime and how to maintain my Body Mass Index at most 25 by looking, so that when the time arrives I'm all ready for the big task.

As my fitness training had just started, I couldn't decide the dates, when to embark on the journey to EBC? So, I started networking with local trek organizers in Kathmandu, Nepal and accumulated some knowledge about costs and all things that I need to take care of before committing to any specific date, and I, even, got a good deal for a solo trek. However, I decided against going solo and joined a group to reduce the overall cost of the Everest Base Camp Trek. The deal was done spontaneously and it was time to start packing, I was ready for the grand adventure.

On day-1, I arrived at Tribhuvan International Airport, Kathmandu, where I was welcomed by the trek organizer, he then put me to a budget-friendly hotel at Thamel. This place, I was staying at, was in the heartland of the tourist hotspot of Kathmandu meaning there were tourists everywhere and an ocean of trek organizers was filled with several options of trekking in Nepal. Lucky for me that the hotel had a bank nearby where I could exchange currency, taking approximately NPR 35,000/- in exchange with INR 20,000/- which was the best exchange rate I got. Nonetheless, other currency converters give around +/- 1000, lucky to save this amount for the trek expense.

The next day when I, with the group, boarded the flight to Lukla, the place where Everest Base Camp Trek actually starts, the realization hit me hard and I knew the adventure was only getting started. When we landed and arrived at Tenzing-Hillary Airport at Lukla, we were introduced to our trek guide, a very humble and supportive person.

We then started our 7-hour long trek for the day from Lukla to Phakding. At Phakding we had our first experience of spending a night in high altitude tea houses, spending a night here among the locals, and getting along with them was as mesmerizing of experience as the mountainous landscape we threaded all day to reach here. The memories of the time we spent there are still fresh in my memory to date. Being a little beautiful village in the high valley of the Khumbu region meant there wasn't any modern facility, which one might like, but I needed to find a chemist and get some supplies for the trek. If you need any kind of stuff, I must say you would need to get it before getting on that flight to Lukla. Once at Lukla, finding any stuff might be not easy or reasonably priced, still you can find some shops at Namche Bazaar. Which is our destination for the next day, day 3 of the trip? Namche Bazaar is about 6 hours of good old trekking from Phakding. 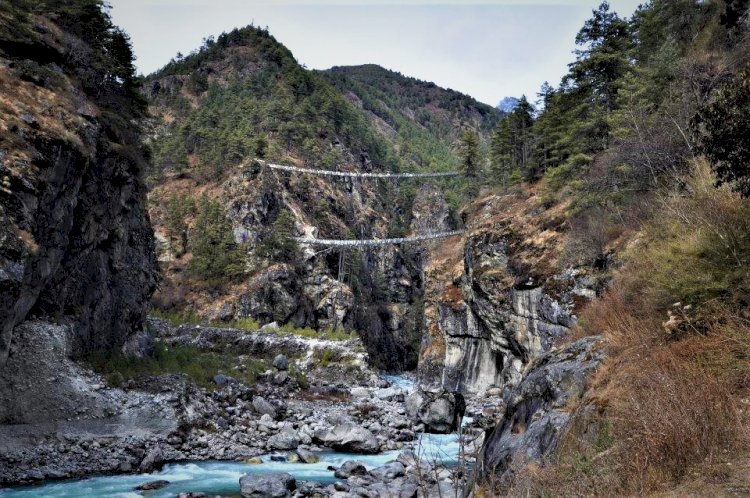 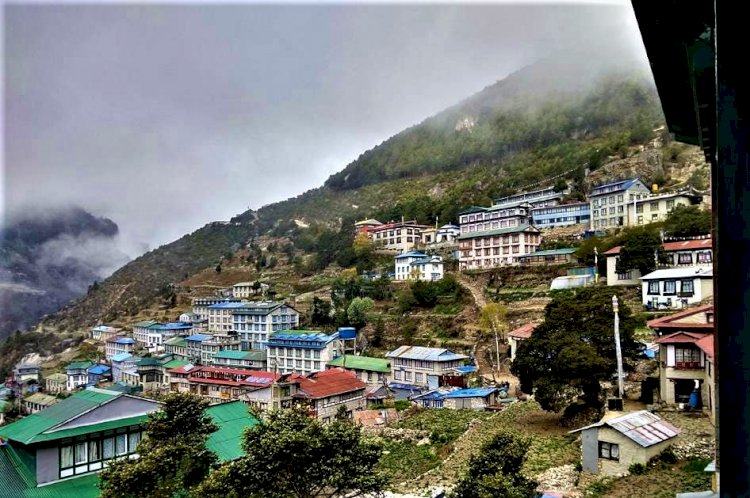 It was a sigh of relief, for me, as Namche Bazaar had plenty of shops and fortunately chemists were there. I had to buy some stuff for the trek which I had missed out on before arriving in Nepal, the prices were quite high and very demanding, so I had to doll out some extra cash to buy things especially medicines, which are in scarcity in the region. For me it was a lesson learned the hard way, but an important lesson, since then I had made it a habit to get all the supplies sorted before heading out on any treks. After shopping for the essentials, my aimless wandering in Namche got me to befriend some local folks, leading a privileged life in the city without any knowledge of the hardships of these folks, I must admit that I was quite prejudiced about them but once I got an insight about their daily life and the struggle to just survive, it kind of made me sad. While we can get everything with just a tap on the smartphone, these folks have to trek more than 20 miles a day with a large weight to get the most basic essentials for survival. I have heard some stories about the Sherpas of the Khumbu region but it took me some time to come to realize that I was in the company of these Sherpa, the toughest of the mountain men in the world, truly!. On the trail, I noticed colorful Rhododendron arboreum, white, Crimson red-colored flowers in full bloom dotting the landscape.

If you are not a fancy eater then I am sure there won't be an issue for you regarding food in the entirety of the trek. The food we had throughout the trek was traditional Dal Bhaat, which is almost the same as Dal Chawal, Lentils curry with Rice of the Indian cuisine. There is a belief that the Power of Dal - Bhaat is for 24 hours. 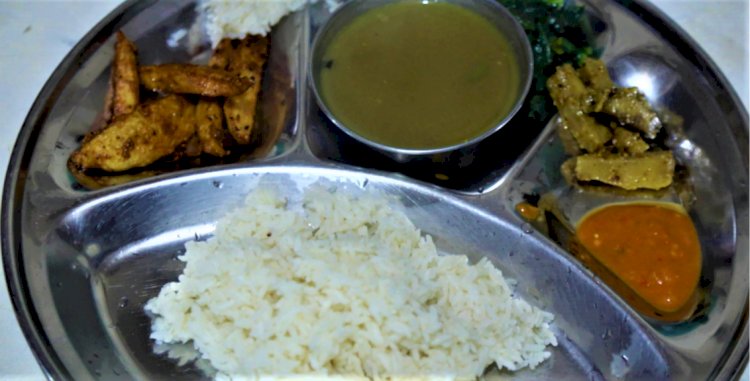 As the days went on we climbed higher altitude and staying at higher altitude does not come cheap, especially food. With each passing day, food started to get more and more expensive. But thanks to Dal Bhat, it was under budget for me. Ignoring all the expenses, I was totally focused on reaching base-camp, no matter what I have to go through to get there and see the magnificent peaks of Mt Everest, Mt Lhotse, and Mt Nuptse. This positive energy swelled on me as I started trekking with energy, can not say anything for the others but you gotta believe me when I say these mountains really flush out the negativity, give strength to never give up on anything. Among all this positivity the only thing that was trying to take me down was the fact that I could not get along with the group, I was trekking with, due to the fact that I was the only Indian in the group and the rest of the group consisted of people from various parts of the world.

When we reached Gorakshep on the 8th day, we felt the thrill of achieving something bigger as we realized that the base camp was just 1 hour away. After having quick tea and relishing the surroundings of Gorakshep, even when the views from Gorakshep were mesmerizing I just could not keep my excitement of going to Everest Base Camp down.I could see clearly snow-clad peaks L- R Chumbu 6859 meters, Khangri Shar  6792 meters,  Mount Pumori 7161 meters and Mount Lingtren 6749 meters and Khumbu Tse 6636 meters raising high in the valley. 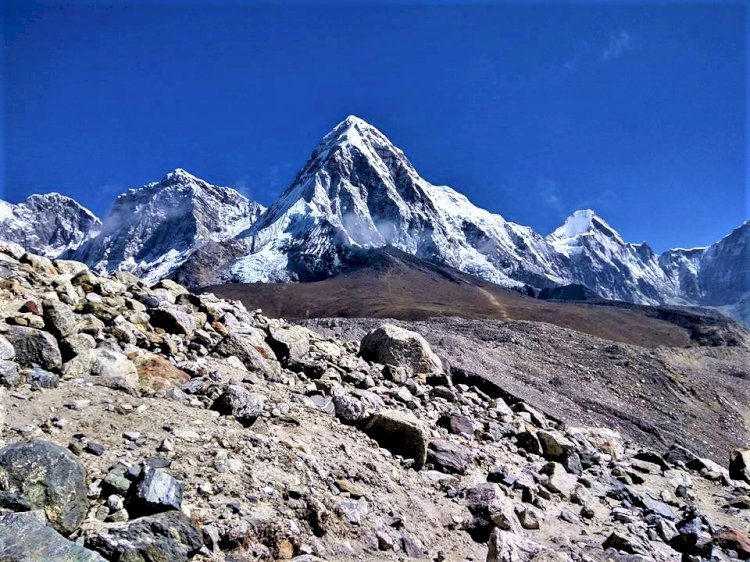 I just unloaded the rucksack at the tea house and started trekking towards the base camp with an unmatched level of energy, It might sound like I am exaggerating but still, I am going to say this, the kind of energy and excitement I had at that time I have never felt that energy ever before and am not going to do so. On the way, we saw the majestic mountains Mt. Nuptse, Mt. Lhotse, could not get a glimpse of Mt. Everest as it was hiding behind these two mountains. After arriving at the base camp, we celebrated the achievement. The big thing was that we didn’t realize that we were actually standing on Khumbu glacier, it is one of the best sights of the entire trek, the Khumbu glacier climbs up all the way up to the south face of Everest. After spending around half an hour at the base camp area we then headed back to our tea house and had one more celebration. 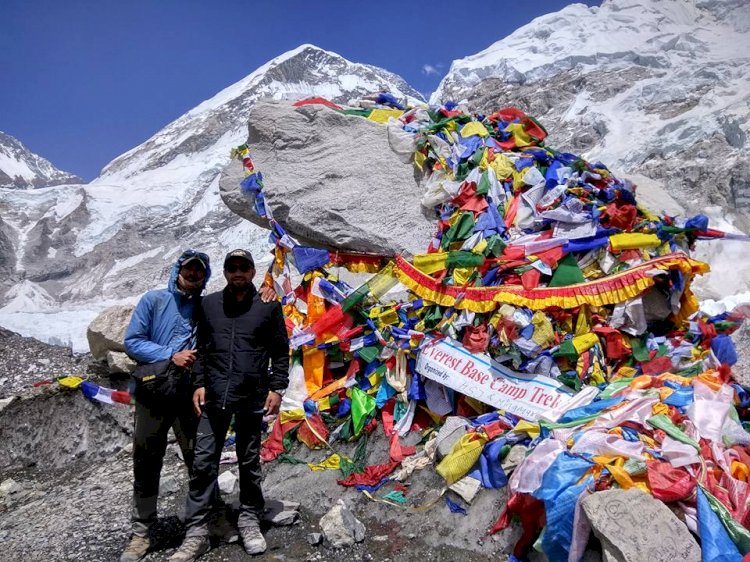 As the new day arrived. We soon realized that it is the start of the end of our time here. Soon after breakfast, we started to make our way back to Lukla, while the ascent to Everest Base Camp took 9 days, it took us 4 days to get back to Lukla. It was during descent when I caught a little health issue, which means I had to dish out a lot of money for treatments and medication, especially at Namche Bazaar. After this incident, I realized that I should have got Insurance for myself before embarking on Everest Base Camp Trek. Due to the fact that I was ill, the cancellation of my Lukla-Kathmandu flight was very fortunate for me and it gave me much required time to rest and recover. For two days there were no flights back to Kathmandu so I just rested there at Lukla and recovered in time to be available. While I was recovering at a rapid pace I was also worried about my flight back home to Pune. Once again I got lucky and just reached in time to board my flight to Pune.

The next day I departed from Kathmandu and had to bid farewell to the whole trekking team who supported me extensively to achieve my dreams to reach EBC. Every trekking day will remain in my memories. Hopefully, I visit Nepal again for other famous treks!