On the Annapurna Trail, you get to see a few of the beautiful mountains of Nepal Himalayas. The tea house trek is something you should plan for the next trekking season. 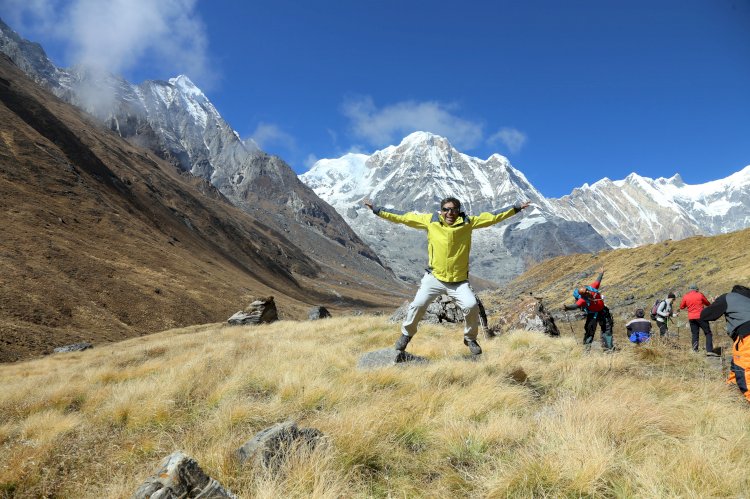 At Annapurna Base Camp

If  the  Mountain Annapurna (the goddess of plenty) is  covered completely by
Clouds and not visible for a long time then not seeing her, in her memory  I
forget to remember the entire world.

It was snowing continuously for 48 hrs with piercing cold and temperature being a good ten below zero.I was patiently waiting for the clear weather in Annapurna base camp at 13800 ft. Covering my shivering body with wollen clothing an early morning at 5:00 Am, I carried my camera equipment from my tent to a particular location in the hope of taking good pictures. Even our local porter  Raj Sharma was shivering thanks to the cold climate.
The entire Annapurna base camp area was covered with mist. Previously the photography location was absolutely clear proudly displaying a 360-degree view of the snow-clad mountains namely Machapucchure ( 7535 m ) , Gangapurna ( 7455 m ) , Annapurna South ( 7937 m ) , Annapurna I ( 8091 m), Annapurna II ( 7575 m), Annapurna III ( 7535 m ) , Annapurna IV ( 7219 m) , Himchuli ( 6441m) and some unnamed peaks.

Usually, in the Himalayas,the snow-capped peaks glow with the golden touch of the first rays of the sun. But  I thought luck was not with me.I closed my eyes for a few minutes gazing the sky and sincerely prayed to Mother Annapurna to have mercy on us and bestow good weather.
I think the goddess heard my prayer and when I opened my eyes to my dismay within minutes an unbelievable event had taken place. Exactly at 6:00 am only the tip of Annapurna I cleared and glowed in the sunlight giving me Divya darshan. Then the clouds in the valley moved away and soon the entire valley opened up slowly and was clear for the whole day.
After taking the necessary permit from the Annapurna Conservation Area Project Office for ABC Trek at Pokhra.We started trekking from a place called Nayaphool which is the last road head about 40 km away from Pokhra town.
After crossing the check post near the metal bridge over Modi Khola  ( Khola – river ) at Birethanthi, the confluence of Modi Khola and Bharungdi Khola. Walking uphill more or less parallel to the Bharungdi Khola we reached a hamlet called Ulleri (2607m) in the evening. The base camp trek is popularly known as a tea shop trek. Basic food and accommodation is available along the entire trek route.
The next morning we started early after having parathas, walking continuously for about 5 hrs. We reached a place called Ghorepani (2872m) in the evening. Since food and shelter was available on time, I personally did not find walking carrying big packs strenuous at all!. The star-studded sky in the night indicated good weather the next day. We slept early after an early dinner.
Next morning we started early after having hot lemon tea at 4:00 am to reach Poon hill(3194m). Walking uphill amid Rhododendron bushes ( Rhododendron arboreum the National flower of Nepal ) we reached the tip at 5:30 am. Situated at an altitude        Poon hill is the highest vantage point in the route which offers fabulous views of snow-clad mountains in a semicircle from close quarters. The sky was absolutely clear. The snow peaks Dhaulagiri (8167 m) , Nilgiri (6940 m) , Tukuche (6920 M) , Annapurna massif, Himchuli, Machapuchure were visible and glittering with the first rays of the sun and were a feast to the eyes. 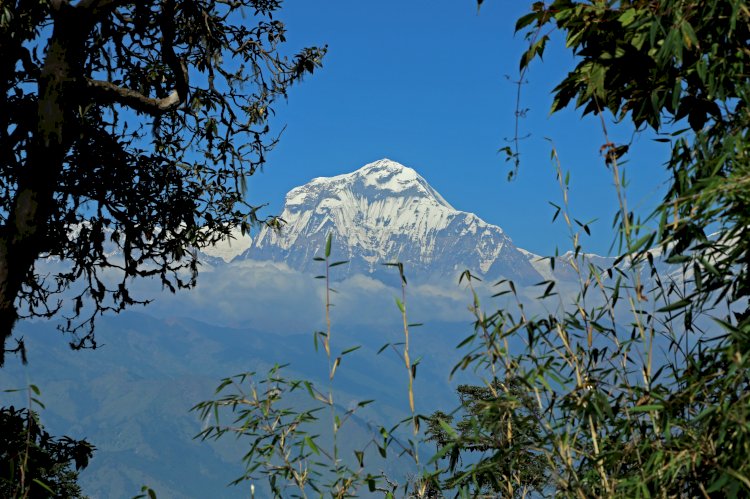 Retracing the path upto Ghorepani after having a quick breakfast of Apple Porridge we hit the path to reach Tadapani before dark.The route was a little tough with steep descents and ascents.The path was almost through Rhododendron forest with thick velvet green moss and evergreen rich forest.In winter the whole trail is a Kaleidoscope of colors.The gushing streams and waterfalls that dotted the route was really a feast to eyes. After crossing the log bridge we reached Tadapani late evening.We were dog tired and after having a vegetable soup and tasting Nepali cuisine  ‘Dhalbath’ ( Dhal – Lentils and bath – Rice)  for dinner we slipped into our sleeping bags.
The snow-capped peaks visually appeared to be very close amid Deodhar and pine trees. Next morning after having a quick breakfast and walking for 6 hrs through dense forests of oak, bamboo, Rhododendron which gave to Millet pastures and cultivated fields. We reached Chomorong (2050m) in the dark. The small hamlet is a Permanent settlement in the valley and is the meeting point of all the trek routes and gives a fabulous view of the valleys.The panoramic view of Annapurna, Himchuli, and Machupucchure standing high was spell bounding. Annapurna region in the Nepal Himalaya is a hotspot for nature lovers. Trekkers across the globe come here during the season. 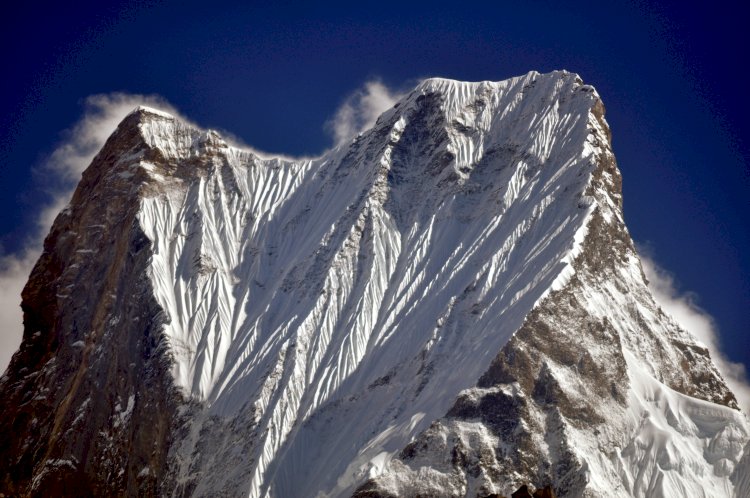 Descending the stairs and after crossing the Modi Khola over a hanging bridge and passing through small hamlets Sinuwa, Bamboo we reached Dovan in the evening. A hot shower followed by dinner and going early for bed was seemed relaxing. The enchanting view of the Machupucchure peak from Bamboo was memorable. Locals call it Fish Tail because of its appearance. Machu – Fish, and Pucchure – Tail. It is still virgin and locals worship it as a sacred peak. 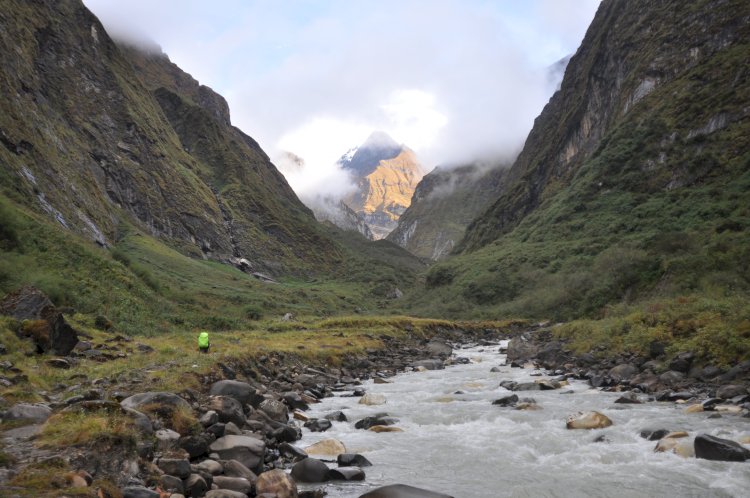 From Dovan after passing through resting points Himalaya, Deurali (4313m), and Machupuchure base camp(3703m) (  Though climbing permits are not given to climb Machupucchure Peak) along Bhoj Patra forest amid the mountains which stand like sentinels guarding the valley. Almost parallel to the swift-flowing Modi Khola peaks Annapurna III and Gangapurna stand high, in the end, watching us. The stretch between Deurali and Annapurna Base Camp is an Alpine meadow with a riot of colors. The sound of the gushing streams, perennial waterfalls, the sweet smell of honeysuckle flowers which grow profusely here. The chirping of Rose Finch in the bushes is soothing for the tired body, mind, and soul. After  Hinku Cave which serves as a natural rest place for trekkers, crossing series of streams carefully in between the huge ramparts of Hinchuli and machapucchure eventually we reach an awesome amphitheater ‘ ‘Annapurna BaseCamp’ in the evening.
Due to unprecedented bad weather, we are forced to stay in the Base Camp for almost 2 days. In spite of the cold, we are determined to stay and wait there till we get good weather.
The next morning I was up early.I braced myself against the icy breeze and ran to the viewpoint to capture the sun’s very first rays illuminate and heat the cold icy landscape. The prayer flags thangkas at the memorials who laid their lives in climbing were fluttering.It was still dark and the faint lines of the Himalayan range could be seen under the few late-night twinkling stars that I thought were defiantly standing to prove their existence in the vast sky. Indications of getting good weather lurked in mind and through the grace of almighty had a fabulous view of mountains encircling me.
As the eastern sky lit up and the first rays of the sun-kissed the Annapurna I and surrounding peaks, each one of them at the back remained like a dark horizon. With the valley below and the Base camp still bathed in the dark cover, the illuminated expanse of the Himalayan range was truly a memorable sight indeed.

As the entire valley lighted up, the temperature started rising, the rising snow plumes and peaks started glowing with the sharp rays of sun. Our joy knew no bounds and we had no words to express our happiness indeed! Mesmerized I watched the creator's magnum opus unfold itself. The Poetry in Nepalese at the beginning expresses it all.!
We commenced our return journey through the long arduous trek had taken its toll on the body, the success at Base camp was providing us with the adrenaline to carry on. Retracing our route up to Chomorong and after that, we changed the course of our trek and reached Jhinuthanda by evening. The birds view of Modi Khola, Ghadruk hamlet which is home for one of the ethnic tribe called in Nepal., Annapurna and Himchuli were pleasing.A dip in the natural Sulphur hot water springs situated next to Modi Khola was soothing to the body.A casual easy walk along Syauli hamlet brought us to Nayaphool finally, the starting point of our trek. After an hour's drive, we reached Pokhra by afternoon exactly after 12 days we had left.
I felt we’d experienced a slice of heaven – the magnificent scenery was etched in our memory forever.