Hanagal taluk situated in the district of Haveri of Karnataka is known to have acclaimed its place in the world of music and Architecture. The voice of renowned singer Gangubai Hangal among music lovers, but very less is known about the Tarakeshwara temple of Hoysalas. The contribution of Hoysalas rulers for art and architecture here is remarkable! 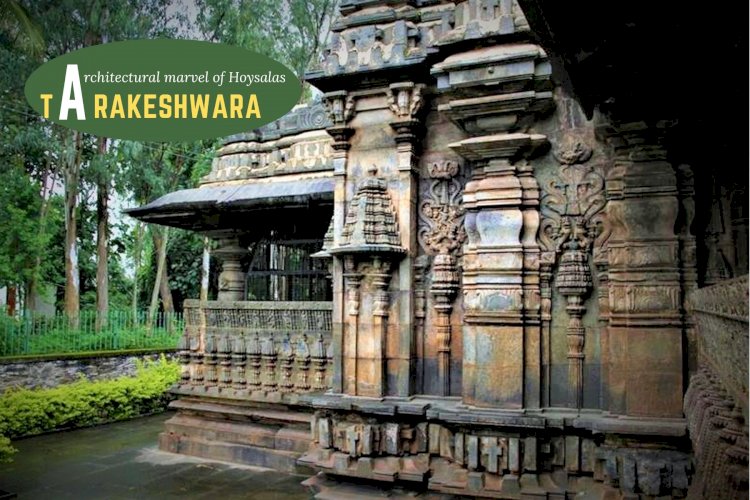 The Contribution of Hoysalas rulers to art and Architecture in Karnataka extraordinary. After defeating the Chalukyas and Cholas, they had supremacy in the entire Karnataka. During their 150 years of reign in Malnad region, about 112 temples were constructed in  Belur, Somanathapura, Halebid, Hosaholalu, Kikkeri, Turuvekere and few other places in Karnataka, Among them, few are temples like Belur, Halebid and Somanathapura are declared as a protected monument by ASI and has gained Popularity as an architectural marvel.

As one passes the gateway and enters the temple complex. A tall stone pillar known as Garuda Kamba stands in front of the temple about 15 feet in height indicates that temple has deity and worship is done. The calm place is surrounded by houses and has a circumambulation path around the temple. 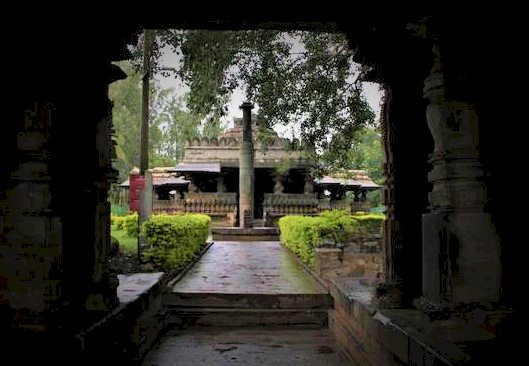 Hangal taluk in the Haveri district of Karnataka is known among the lovers of the music, through noted Hindustani classical singer Gangubai Hangal. Very less is known about the temple Tarakeshwara of Hoysalas with exquisite architecture. 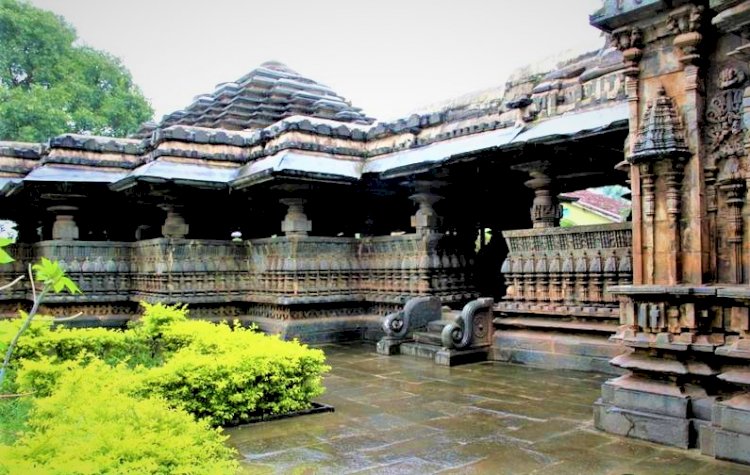 Hangal is about 35 km from the district headquarters Haveri. .It is on the left bank of the Dharma River. The place was once ruled by the Kadamba dynasty till the 11th century. Later it was controlled by the Hoysala rulers and Chalukyas. As per inscription, the place is said to be Virata Nagara during the exile of Pandavas mentioned in epic Mahabharata.

The Tarakeshwara temple in the town of Hangal is a marvel of architectural splendor that is worth mentioning.. The temple belongs to the 12th century and has been built in the Chalukya tradition, dedicated to Lord Shiva as Tarakeshwara

The Tarakeshvara temple features a Sanctum Sanctorum Garbhagriha, Antarala, Navaranga  Vestibule, Sabhamandapa, and a Mukhamandapa Front Hall is a good example of the Kalyana Chalukya architectural style. Originally the Navaranga had Praveshamandapas Entry door on north, south, and eastern sides. At present, the north and southern Praveshamandapas have been converted into Garbhagrihas. The Garbhagriha enshrines a tall Shiva linga installed on a Panipitha having Kadambastylistic futures..

The main Garbhagriha enshrines a Linga which is called Tarakeshvara, sculptures of Vishnu, Brahma, Kartikeya, and Nandhi.In the Garbagriha (sanctum sanctorum), the excessive decorations around the doorframe is shown itself clearly. This is made possible by the use of soapstone which is easy to mould as opposed to the sandstone used by Badami Chalukyas. Also present were more miniature Shikaras (some Nagara and others Vesara). 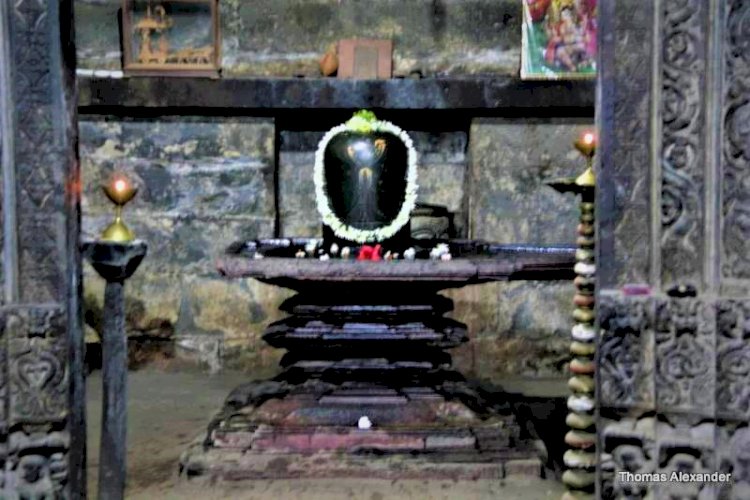 The exterior walls of the temple have bas-relief sculptures Shikaras or towers.dancing postures and with flower designs on the upper panel. There are panels depicting stories from epic Ramayana, Mahabharata. Few towers with carvings in the middle. At few places are idols of Ganas supporting the stage looks superimposed, appears as if clinging from the wall. The high decorative carvings are can be found only here. 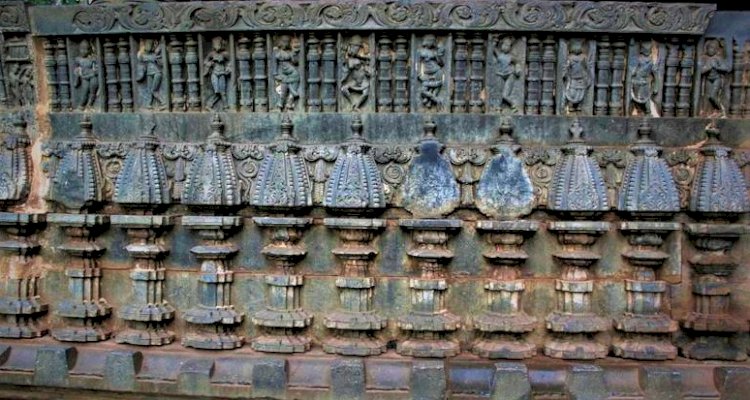 The incomplete carved images of the Dvarapalakas are attractive. In the Mukhamandapa Hero-stones, inscribed sculptures and a few mutilated sculptures are kept. The Kadamba-Nagara Sikhara above the Garbhagriha has intricately carved decorations. It has a sculpture of hero Crest fighting with a Lion or Tiger the insignia of the Hoysala dynasty. It is sad to say that emblem is vandalized and is broken. The second feature is the various representations of the Shikara itself in miniature form on the walls. Chalukyan temples are considered a synthesis of both South Indian (Dravida) and North Indian (Nagara) styles and the integrated style is called Vesara. 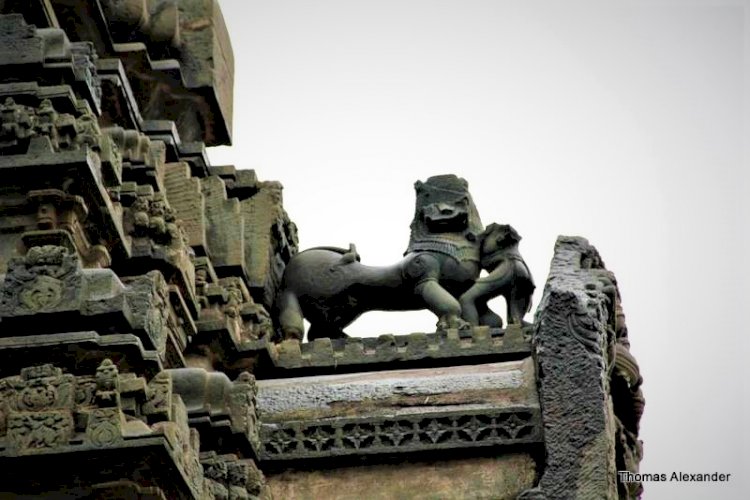 In front of the garbhagriha is the Sukhanasi with four intricately carved pillars and a Nandhi - The celestial vehicle of Lord Shiva is placed in the middle. The Sukhanasi situated on the right and left sides has a Linga and Parvathi sculpture respectively.

The outer walls of the temples have sculptures of Hindu gods and goddesses namely Chamunda, Chaturmukha Brahma, Urgranarasimha, Shiva as Bhairava

Kirtimukha is the name of a swallowing fierce monster face with huge fangs, and gaping mouth, very common in the iconography of Hindu temple architecture and Buddhist architecture. Siva named the Hunger Kirtimukha, the immortal face of glory. He can be seen above the doors of all temples. Kirtimukha is one of Lord Shiva's Ganas... There's a story behind it's name. When Rahu was playing bad with deities....lord shiva told kirtimukha to fight with Rahu and Rahu got so frightened to see kirtimukha as he was very powerful.... kirtimukha ate all the demons and was still hungry....so he asked lord shiva, what should I eat now....? Lord Shiva said, Eat Yourself.... Without Even A Single Thought, Kirtimukha started eating himself and When he reached till his neck, lord shiva stopped him and gave him a name...KIRTIMUKHA.... which means the Glorious Face....due to his bravery of eating himself.
It's Placed at the main door of houses or temples which is believed to protect the home from all negative energies and Wicked Eyes 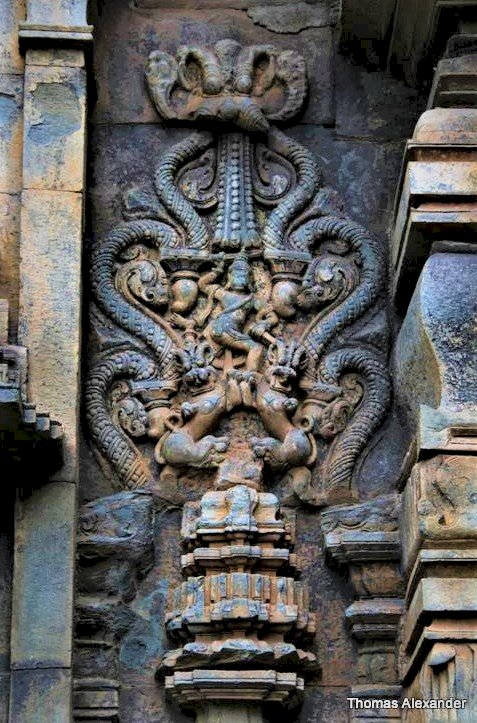 The temple is famous for its very large domical ceiling in the main hall, which rises, in concentric circles of cusped moldings, and then, at the apex, falling again in a great rosette or pendant. The Sabhamandapa with four entranceways is stellar shaped and Hoysala styled huge pillars therein support the upper beams. The rock is carved in the form of a lotus and is 30 feet in diameter, is an octagonal piece of stone supported on 8 pillars.

The intricately carved decorative doorways of the Garbhagriha has Panchashakas. On either side of the decorative doorway of the Antarala has trellis (Jalandharas). The lathe-turned pillars inside the Antarala are fine examples of local engineering techniques of artisans in 12 th century, the carvings on the pillars are truly magnificent. The sabhamantapas ceiling has a decorative ceiling known as Bhuvanesvari with a flower bud type motif hanging from in the ceiling.  The entranceway has few intricate carvings.

Makara Pranala
The Sanskrit word Makara can refer to the amphibian animal we know as the crocodile. However, it also designates a mythological water creature that resembles a croc in only one way it has a long nose like an organ. It is generally depicted as half terrestrial animal (in the frontal part in animal forms of elephant or crocodile or stag, or deer) and in hind part as an aquatic animal, in the tail part, like a fishtail or also as a seal. Sometimes, even a peacock tail is depicted. Makara is the Vahana celestial vehicle of goddess Ganga and Sea God Varuna. Makara is the astrological sign of Capricorn, one of the twelve symbols of the Zodiac. It is often portrayed protecting entryways to Hindu and Buddhist temples In Hindu Temple Architecture,
A Pranala is a discharge outlet attached to the wall of the sanctum. It discharges the lustral Abhisheka water or other liquids poured over the idols. Pranalas are used to drain out the abhisheka-teertham water, milk, ghee, etc poured over the temple idols. The most common type of pranala in historical temples is the Makara-pranala.
The popularity of the Makara-pranala probably results from the creature's association with water. 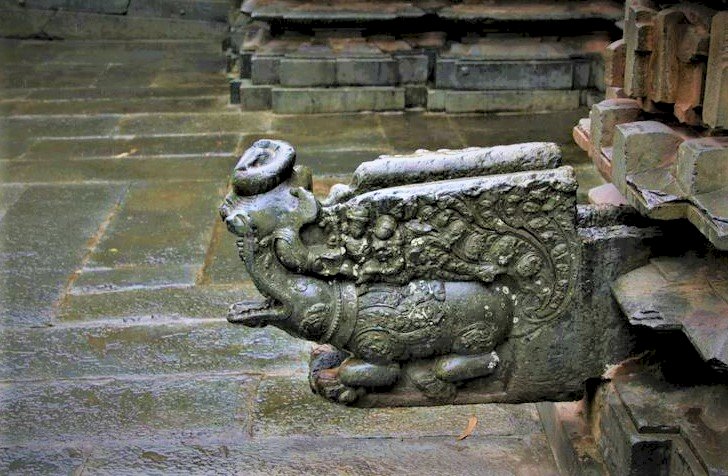 There is a Circular Balipeetam outside the temple, with intricate carvings in the courtyard. Bali peetams in temples are the food distribution places for all animals, birds, and other species. this is purposefully done to ensure the 'other' animals don't enter the sanctum sanatoriums for just-food. 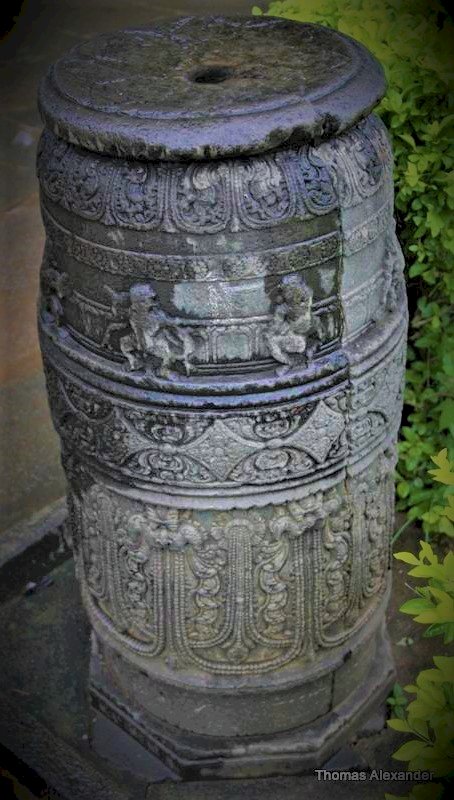 As per inscription records, the grant made to the Tarakesvara temple and while another dated 1121 AD records about the construction of Tailesvara temple. The land grants made to it by the Mahaprashana Masana has been deciphered by historians. However, after the fall of the Chalukyas, the Hoysalas have added their own tradition to other structures around this area.

In fact, these places need to be visited for their architectural value and the deep sense of heritage. Overall neglect by authorities, it has been declared as a protected monument by the authorities. Temples in terms of few visitors (and maintenance) make one sad. With more facilities, amenities, guides, signboards, and including the monument in the tourist circuit of Karnataka will definitely attract tourists.

By Air and Rail: Hubballi is the nearest Airport and Railhead.