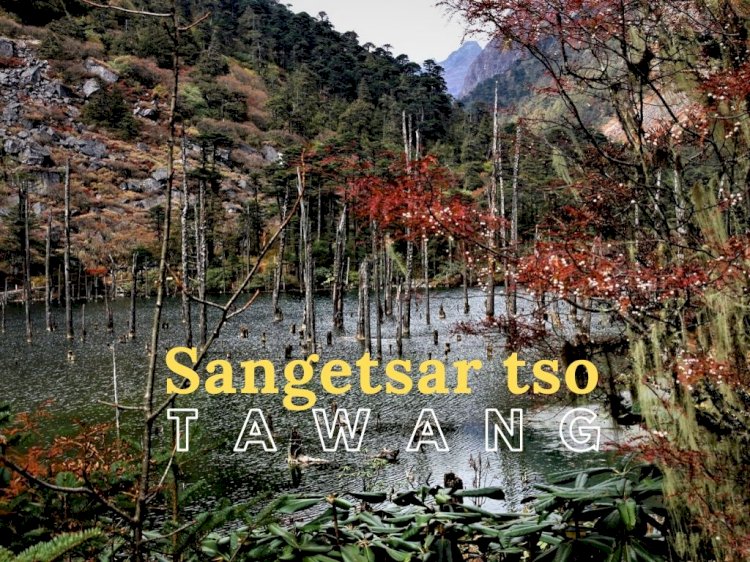 After Visiting Assam - The Land of Rhinos , we decided to head towards Tawang in the West Kameng district of Arunachal Pradesh . A week in thte green environs of Assam had rejenuvated us.Yet we could not resist the natures bounty of West Kameng which we were visiting for the first time.Passing through Tezpur and crossing the border near Bhalukpong, we had the feel of the serene surroundings that was to be with us for another week.

Orchidarium at Tipi  about 5 km from Bhalukpong was our first destination .Situated on the west bank of Kameng river = also known as Zia Bharoli in Assam , is Asias 3 rd largest Orchidarium boasts of over 7500 variety of orchids and they are in full bloom during the months of September to April.Arunachal has over 600 species of orchids in India , we learnt that  at Tipi scientists create hybrid species using bio technology techniques.

The terrain from Tipi is rugged , we passed through dense green forest , inched our way up trecherous mountain roads almost parallel to swift flowing Kameng river, drove past roadside  Waterfalls and marvelled at cliff sides aflame with riot of colurs.In fact we could only traverse only at an average speed of 25 km per hour,due to a mix of steep inclines ,hairpin bends. But the drive had more than its fair share of surprises.

Dirang about 110 kms from Tipi was our next halt . It is knwon for natural hot springs and is believed that taking a bath here can cure skin ailments.There are monasteries , apple orchards and National Yak Research and Breeding Centre here.After taking a quick dip in the hot srpings we hit the road leading to Bomdilla.

The roads made and maintained by VARTAK were good.The climb became much steeper near Bomdilla the head quarters of West kameng district.Situated at a height of 8500 ft above sea level Bomdilla isitself a place worth seeing.If offers panoramice views of of the Himalayan rangefrom close quarters and for adventurous there are many trekking trails too.The town has strong Tibetan and Busddhist influence , there are a couple of gompas including the upper gompa ( Goutse Gaden Rotageling Monastery ) and a lower gompa.The town has Ethnographic Museum and craft shops selling souvenirs from China, Bangladesh. Tibet and also boasts of apple orchards.The ascending road to Tawang from here was smooth. After crossing Tse la Pass at 15,400 ft which is the only link between thishidden land and the ourside world.

The road runs through a small ridge and along the paradise lake took us through the widing road.During the winter the pass is decked with snow, with Rhododendron flowers miles to miles, offering breathtaking views of Himalayas around every bend. After a steep descent of about 14 kms from Tse la pass there is a war memorial built in memory of those brave soldiers who made supreme sacrifice in chinese war of 1962. Jaswanth Garh, named after the courageous soldier Jaswant Singh Rana who alone fought the Chinese for 72 hours and then laid down his life for the Motherland.

Nuranang waterfalls at Jang ,  just 30 kms before Tawang was beautiful.Gushing water from height 0f 200 ft was a lovely sight to behold.Standing atop the hill one can expereince caressing clouds and river Jang flowing down in the Valley.If the skies are clear one can have a glimpse of snow - clad Gorichen peak - Arunachals heighest peak in the background.

The majestically set Tawang gompa dominated the, town of Tawang. At the entrance of town was a war memorial built in stupa in memory of those brave Soldiers who gave their lives upholding the pround tradition of Indian Army.

Located at a towering height  of about 10,000 ft above sea level in Tawang Cho Valley. Tawang came to lime light when Chinese red army invaded this part of India in the year 1952. This Buddhist  mountain valley had been claimed by Tibet till the 1940's .In 1062 China Invaded as far as Tezpur and then withdrew.Only after that India started laying roads and setting up military bases  at strategic areas sharing borders with China, Bhutan and Myanmar. It was 1972 that Arunachal became Union Terittory and in 1987 a Independant state.

In the evening we visited tha Tawang monastery , perched atop a hillock just 2 kms from the heart of the town. Tawang Monastery is one of the grandest lamaseries of the Mahayana sect in Asia and the largest Monastery in the  World, next only to that in Northeastern region and is the fountainhead of spiritual life of the followers of the Gelupa sectof the Mahayana school of Buddhism. 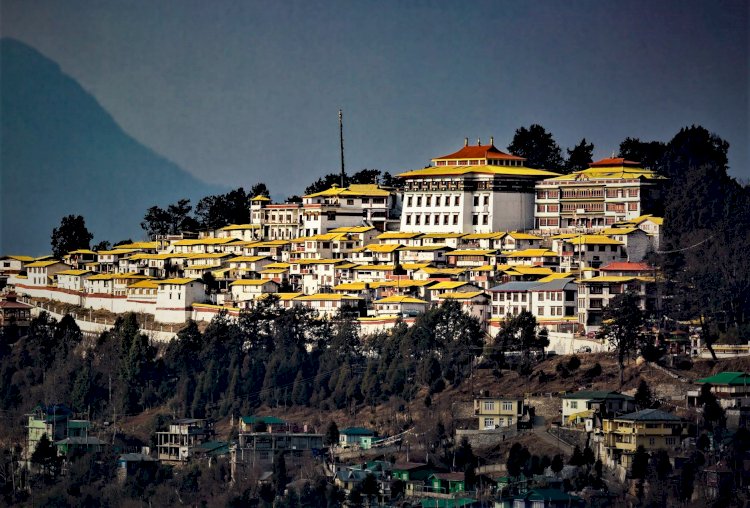 Legends say that in the 8 th Century A. D Guru Padma Sambhava a tantric scholar of Nalanda University followed his horse which was destined to find a place for establishing a monastery.The Horse blessed with divine power stopped at the present site and hence the gave the name Tawang to this place., derived from two words Ta meaning horse and wang  meaning blessing. So the word Tawang means blessed by a horse. And thus Tawang monastery came to being.

Monastery is a white washed stone building , built in classical Tibetan architectural style, is four stery high.The whole place is full of Lamas apparently about 500 of them.Within the temple complex there are seperate houses for Monks , school , meeting hall library and a community kitchen. We took off our shoes as requested and climbed up into its expansive halls  where there was Thankas - Tibetan religious paintings on cloth , motifs , prayer wheels , frescos and images of Buddhist deities and Literature.A 28 ft large high glided statue of Sakyamuni and Buddha Amityayus was very impressive.We were said that inside the stautes are the holy scriptures , relics small clay molded stupas   and small statues symbolic of the body speech and mind of the Buddha. 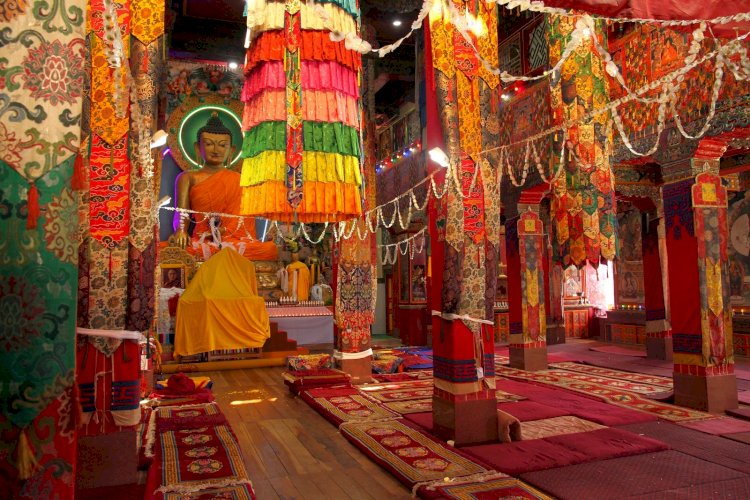 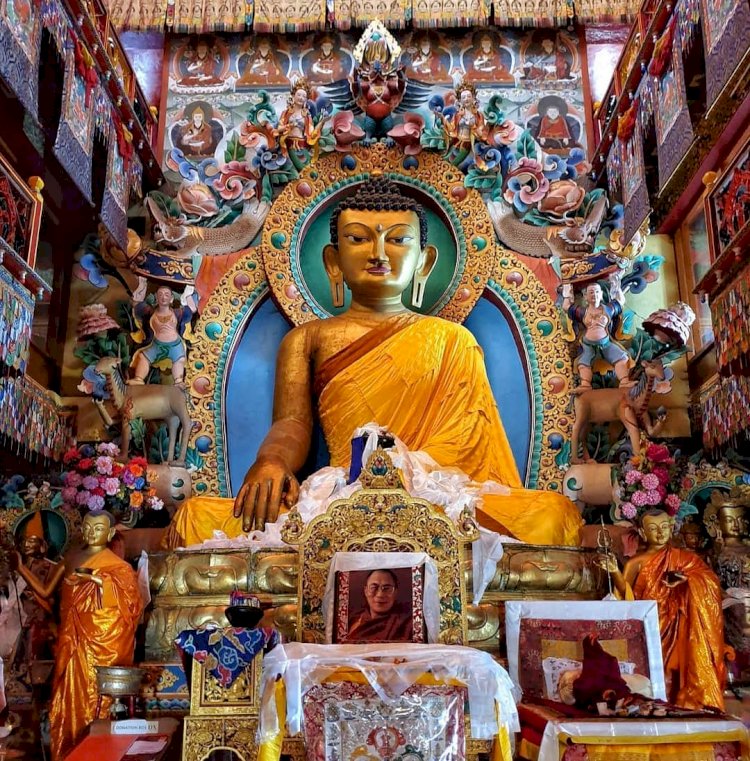 Subsequently a nunnery for the female devotees was commisioned by Lama Karchen Yeshi  Gelek in 1595. The monastery is known as Bramadung chung Ani gompa and is the oldest among other monasteries in Tawang.

Arunachal Pradesh is a land of tribals and is home to at least 26 Major and sub tribes like Adis, Apatani, Monpas, Tagin, Sherdukpen, Mishmi , Nishi each with its own custom and tradition.

Monpas in west Kameng and Tawang dist have said to have come in contact with the Tibetans and adopted Mahayana form of the Buddhist faith while , Khamptis in Lohit district practice Hinayana Buddhism.It is their traditional dress that make the people of this land look dignified and colourful.The male members wear a short woolen trouser called Kang nom or a full length woolen trouser called Dhorna.The charming women folk wear a dress consisting of a red coloured gown with white stripes covering body right from the shoulders to the knee level.This they call the shingka and is is also girdled at the waist by a sashi.Both wear caps make of Yak skin on their heads to prevent themselves from bone chilling cold.The Monpa cap is called gurdam, monpas are artistic by nature and their main occupation is agriculture.

The next morning we set out to discover the numerous lakes surrounding Tawang.It was wet and freezing with visibility down to few metres.Our sumo strained as it took one steep hairpin bend after another, ascending at an angle almost 40 -50 degress.The tracks were narrow with a valley on one side and asheer cliff face on the other.Let alone see the lakes, we could hardly see where we were going.

However we did make it to a tiny Buddhist shrine simly called PTSO Gompa,Despite the inaccessibility and the remote location of the shrine, its popularity was quite obvious.Gally coloured cloth strips fluttered merrily in the wind as testimony to the number of devout Buddhist who had visited is in the past.The sky was bright, blue with sunlight streaming through the clouds.Just past the Gompa there was a tiny lake shimmering in the sunlight, and as we drove on further up the road, we discovered one lake after other.We bounced along the road going higher and higher intil we reached a point called Y junction, which is controlled by Indian Army.A solitary tent with a couple of Jawans was the only sign of life in this bleak and barren region.

Y Juction is a strategically important outpost as one road from teh Junction leads to Tibet.We took the fork to right and drove around 4 kms to Klempta - The last point on the Indian border accesible to Indian civilians .Klempta is one of those surprises that make free wheeling around the country worth so pleasurable.A pacid lake with the hills in the background reflected in its mirror surface.There was pin drop as we gazed in awe at the pleasant sight before us.After what seemed eternity , we drove back to Y junction and set out to explore other route down the road 5 kms, we came across a sign board that brought us to dead halt.The board informed us that Gurunanak had visited the spot twice 500 hundred years ago , on his way to Bhutan and Tibet.Around 100 from the road , we spied a makeshift Gurudwara upon a hill.

We clambered up to it excitedly only to discover that there was another wooden structure tucked away high up in a niche in the hillside.After 15 minutes ascent we reached a hut. It wasnt just the climb but the view from here too our breath away.Three lakes each seperated by just a few jundred metres.Shimmered below us like diamonds in an exquisite tiara.!

Our latest discovery fuelled the drive to discover more of this seemingly virgin land.We drove towards our final goal Tatsang Gompa known as Tigers Den  around 10 kms away.The landscape along the way was simply breathtaking. The hills were covered with patch of Yellow , Red  an White Rhododendron flowers.A riot of colours unmatched or uncaptured by man.

Along the way we passed Nagojji lake which was the largest , we had seen till now.The hills, reflected in the lake making the scene picture perfect.As we drove towards Tatsang Gompa the landscape changed  dramatically.We plunged  into the very heart of pine forests perparing for the on slaught of winter.We slowly descended towards another huge lake called Sangetsar Tso.

The difeerence was that this one had a huge trunks of pine trees sticking out from the middle of the lake.And snow clad peaks in the background. We came to know that in the recent past Bollywood had discovered this isolated paradise for shooting some movies including Sharukh Khan - Madhuri Starrer Koyla and from then it is popularly known as Madhuri Jheel.

Our last stop was Tatsanf Gompa .A simple Gompa perched high on a Cliff provided us with panoramic vistas of the valley below.No wonder it seemed as though we had been going around circles all the day.At last count we had seen around 20 lakes of avrious sizes and were in no mood to return.But mother nature made the decision for us as the mist began to settle and dark clouds loomed omniously above. We drove back to Tawang in a trance for we had been blessed with a vision of nature in its most pristine untouched state. But not undiscovered !