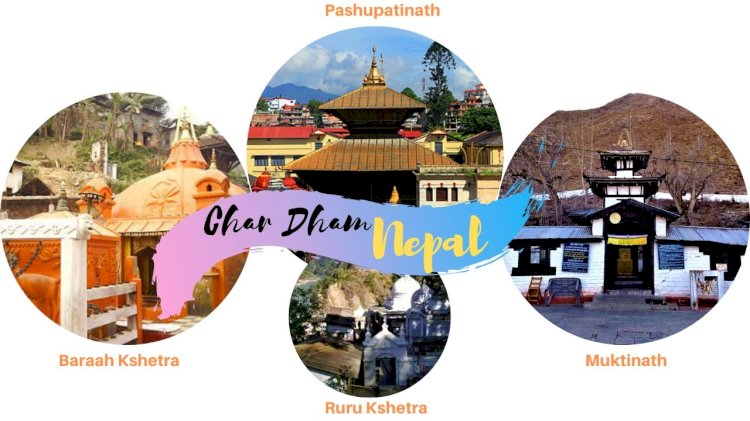 Hinduism has played an important role in shaping the history of Nepal, Until 2008, which was a Hindu kingdom, and later declared the world’s only officially Hindu country. Hinduism played a significant role in the emergence and development of the modern state of Nepal. While Neal is now an officially secular republic, country. The country is home to some of the Holiest pilgrimages in Hinduism. Nepali Hindus worship is similar to India’s Hindus, being Brahma the creator, Visnu the preserver, and Siva the Destroyer. One can see temples dedicated to different gods and goddesses spread across all over the country.

Similar to Char Dham in India such as Kedarnath - Badrinath - Yamunotri and Gangotri, Nepal too has four dams that are popular and visited by Yatris.Religious shrines have their mention in holy scriptures thus having mythological and historical significance and have been worshiped for ages.

The Char Dhams of Nepal are discussed below 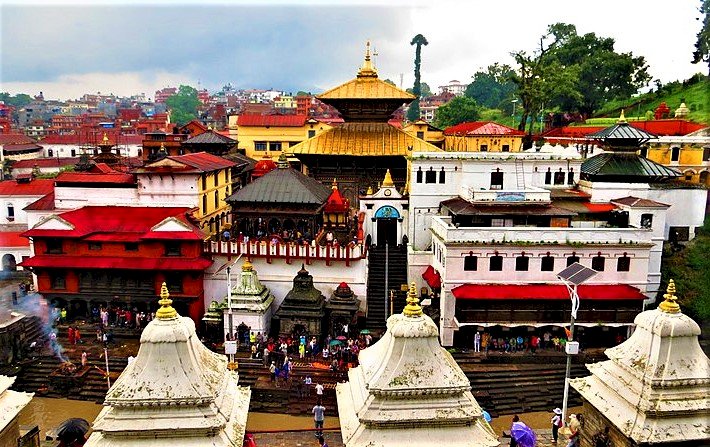 Known as Pashupati  Kshetra dedicated to Lord Pashupatinath is one of the sacred pilgrimage sites in Nepal. Built-in pagoda-style this 17 th century temple is an important pilgrimage site for Hindus.The temple complex lies on the banks of the Bagmati River and lies in the heart of Kathmandu. The Pashupati Kshetra houses antique relic right from the beginning of the Kirati civilization some 2000 years ago, worshiped as the presiding deity of Nepal. Pashupatinath symbolizes the beginning of human settlement in the plains of Kathmandu Valley. The word Pashupati literally means lord of animals. The temple is the epicenter of temples dedicated to Lord Shiva devotees across the globe visit this time around the year.

This temple is one of the seven UNESCO World Heritage sites in Nepal. Surrounds by alleys, bustling street vendors, and structures. This temple is a powerful and positive vibe, a symbol of spiritual energy.

The roof of the temple is made with copper and is coated with gold. There are four main doors to the temple and all the doors are covered with silver sheets. The inner sanctum of the temple holds the idol and the outer sanctum is a corridor styled open area.

The main idol in the temple is a stone lingam, entwined with a silver serpent. The lingam has four sides and five faces. Each face holds two hands with Rukrasha mala and a kamandalu. Once you enter the large arch gate, you will see a golden bull statue, which is said to be the celestial vehicle of Lord Shiva. Pashupatinath temple is built in pagoda style. Temple houses the statues of Lord Parvati, Lord Ganesh, Lord Kumar, Lord Ram with Sita, Lord Hanuman and Lord Lakshmi.

The Arya ghat on the banks of Bagmati river is for open air cremation ground for the departed souls. 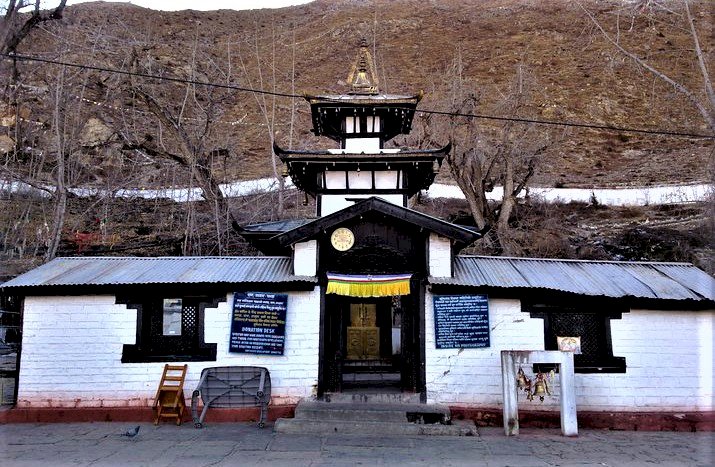 Known as the Mukti Kshetra, the abode of Muktinath or Shaligrama dedicated to Lord Vishnu lies in the Mustang district, in the North-Western region of Nepal. Muktinath is literally known as God of Salvation.is of great significance for the Hindus. Every year thousands of devotees visit the Dham as an important pilgrimage site as a dream destination and to achieve Nirvana. Situated at an altitude of 5900 ft above sea level it is about 18 km from Jomsom district the headquarters of Mustang.

The sacred shrine of Muktinath in pagoda style is surrounded by a green patch of trees, is the birthplace of Gandaki river It is popularly known as Muktinath - The ultimate place of Salvation.The main shrine of Muktinath is considered as one among the Ashta Kshetras - Self Manifested for Vaishnavite followers and is known as Svayam Vyakta Kshetras. It is also one of the 108 Vaishnava Divya Resham shrines in the world. There is Buddhist gompa here which is referred by bassists and attracts pilgrims across the globe.One can take bath in 108 thirthas which is considered as auspicious before darshan of lord.

Hindus offer tributes to their ancestors, perform Shraddha and ceremonial rituals, at Kagbeni which lies between Jomsom and Muktinath.During Festivals like  Rishitarpani, Ram Navami, and Ananth Chaturdasi the temple of Muktinath wears a  festive look.

The best time to visit this shrine is from March to June September to November.It is one of the points on the popular Annapurna circuit trek. STOL flights and choppers services from Pokhra. It is also accessible by road from Pokhara. 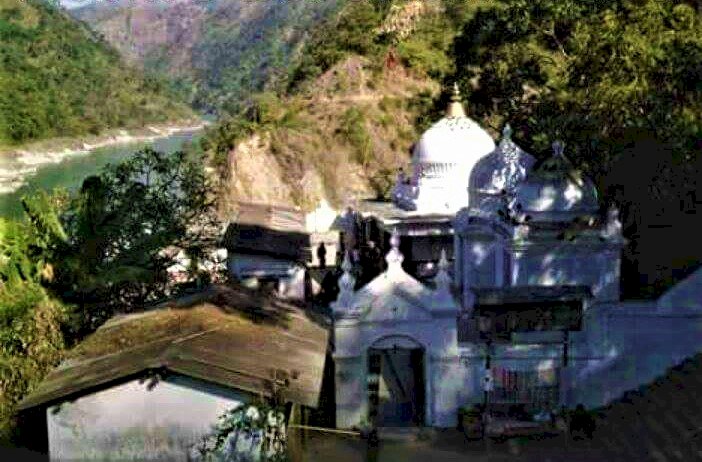 An important pilgrimage shrine for Hindus situated in Biratnagar in the Eastern region of  Nepal. Situated at the confluence of Sapta Oshi and Koka rivers, the main attraction of the place is the white temple dedicated to Lord Vishnu. The temple in Shikara architecture style, Vishnu as Varaha Boar incarnation attracts a large number of devotees from far and near every year. Lord Vishnu in his 3 rd avatar to slay asura demon Hiranyakashapu at this very place in Satya yoga. During Makara Sankranti, the place gains a festive look. It is also known as the Bhu Varaha Swamy temple by Hindu Vaishnavite sect who visit the temple. Devotees flock this temple to offer prayers to Lord Vishnu.It is at this place that the 7 tributaries meet to form the massive Saptaoshi river. The temple complex contains figurines from the 5th century and in front of the shrine is a stone where you can test how free of sin you are, if who is able to raise the stone, then it means you are sinless.

Kumbmela is celebrated here every 12 years attracts pilgrims across the globe. After visiting the shrine of Vishnu, once can visit temples of Busha Subba and Dantakali in Dharan situated closeby. 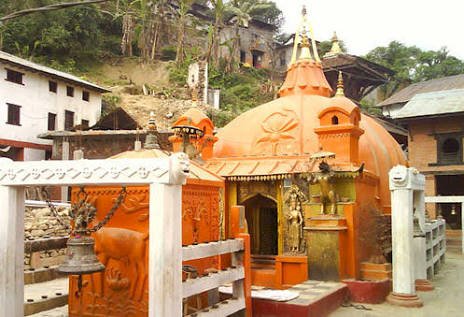 Popularly known as the Rishikesh Theertha, Ruru Dham lies on the confluence of Kali Gandaki and Ridhi Kola rivers in Palpa district of Nepal. A small hamlet Ridi is situated in the deep narrow valley. There are many historic temples here and most famous of them is the temple of Rishikesh consecrated by King Mukund sen, then ruler of Palpa.It is said that king discovered the idol of God Rishikesh in the Kali Gandaki river when he was taking a bath.

Ruru Khestra lies in the ancient route to Muktinath and Damodhar Kunda. The temple complex is known for various forms of architecture. Typical medieval temple complex and sculptures of the Sen period of 15 th - 18 th Century. Ridhi still retains its medieval lineage in architecture to the Rishikesh complex. The existing heritage of Rishikesh is still intact fairs and festivals associated with it are still practiced still today with fervor.

According to the Baraha Puran, the holy place gets its name from a girl called Ruru. She was born to a fairy named Pramlocha and she was caressed and brought up by a doe.Ruru through her penance pleased Lord Vishnu. Pleased with her penance Lord appeared before her and her the wish.She requested Vishu to stay here forever.Lord moved by his devotion agreed and stayed there as Rishikesh. There are 2 separate temples dedicated to Lord Vishnu and Ruru Kanya.A four-arm stone image is seen in the sanctum of the Rishikesh temple. Pilgrims pray for Lord Vishnu and also perform Shraddhas or ceremonies at the confluence of Sacred rivers Ridhi Khola and Kali Gandaki for th departed ancestors for Mukti.

The Holy Shrines can be visited individually or at a time as Chardham Yatra from Kathmandu city.