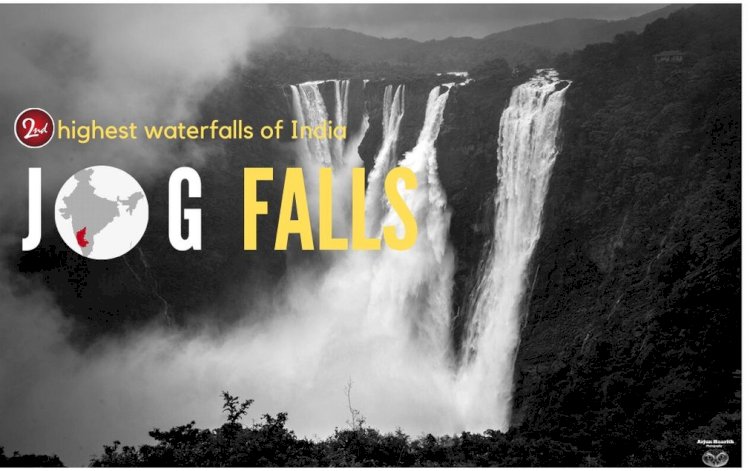 The vibrant state of Karnataka is home to some of the picturesque waterfalls whose splendorous charms and wild scenic beauty never cease to mesmerize you. Gerosoppa popularly known as  Jog Falls in the District of Shimoga is the undisputedly, the second-highest plunge waterfall in India. This is besides the allure of Hebbe, Gokak, Shivanasamudra, and Abbey that are modest in magnitude, still no less grand by their own virtues.

Unknowingly the mystic charm of waterfalls has inspired a lot of souls, nature lovers, poets, and draws us again and again.

Every monsoon is a Rhapsody to savor the best of (Joga Jalapatha ) Jog Falls! Aren't you curious to know what makes these waterfalls a special one?

Know about these surreal facts about this enchanting falls and reasons for must-visit in the monsoon.

Jog Falls is the Second highest 1493 ft plunge waterfall in India.After the Vajrai waterfalls of Maharastra 1840 ft. Jog Falls Plunges, with a vertical drop directly without support from the cliff.

The important fact about Jog falls is that it is used in the generation of electricity. The power station was built in 1948 with a capacity of 120 MW and was named after Krishna Rajendra, King of Mysore. Later, it got changed to Mahatma Gandhi hydro-electric project and was served by the Hirebhaskara dam, until 1960.

An interesting story, which is apt to mention. In 1964, Sir M V Visweshwaraiah, was Diwan of Mysore and one of the finest Civil Engineers of Karnataka visited  Jog Falls for the first time. Others who escorted him began to admire the waterfalls. When asked Sir M .V, about his opinion, he said ' what a Waste ' he was bit disturbed and out of concern said that all the energy is getting wasted flowing to the ocean.

Later on his advise and supervision, Linganamakki Dam was built across river Sharavati at Kargal and is used for power generation.It is the largest water reservoirs across the country.

It is called as Joga Gundi and the word Joga in Kannada means ‘Falls.’ This has a reference in the language of Kannada speakers living in Sahyadri region. It is said to be a derivative of Kannada word ‘Javagu’, meaning marsh wet region.

The river Sharavathi takes its birth at Ambuthirtha in Thirthahalli taluk, unites with Haridarvathi, on the right traverses a length of about 102 km in a hiily terrain taking a northwesterly course before descending down a magnificent vertical drop of about 300 mts pouring the world-famous long falls.  This jog falls is a famous tourist resort in India, the importance of which has further increased with the taking up of the Mahatma Gandhi Hydel project and the Sharavathi Hydel project in which electricity is generated at the cheapest cost in Asia.  From the log, the river enters the north-Canara district and finally flows into the Arabian Sea near Honnavara.

Jog falls is a combination of four falls that plunge into a deep gorge in four different segments/ streams. Each of these segments is given a separate name. Raja (King) pours in a single continuous stream to the base Majestically. The Rani (Queen) has a stream that is curvy and zigzag just like a female and is synonymous with names given dancing to the tune, the most alluring sight to behold. Roarer crashes on a lot of rocks during its fall and violently rushes downwards to meet the base making a lot of loud noise, hence the name. Rocket streams out of a small opening at lightning speed and shoots downwards in a series of jets.

Jog Falls is mostly rain-fed and you can see it in its complete glory during monsoon (from May to September). In dry-season, two out of the four streams of Jog Falls dry out and the waterfall is tapered down to a pair of thin streams trickling down the cliff. In 1964, Karnataka's biggest dams – Linganamakki dam was built across the Sharavathi River. Since then the water inflow of the falls decreases considerably every summer as the gates of the dam are closed during summer months.

named Raja, Rani, Roarer, and Rocket. When these four falls in full flow then we call it is as ‘The Jog Falls.’ Raja is the highest waterfall (830 ft) which joins the roarer at a certain point. Roarer takes the name because of the sound it makes and it drives like a Jet. On the other hand, Rani go smoothly and gracefully touches the ground.og Falls are created by Sharavati river and is associated with Linganamakki Dam built across Sharavathi. 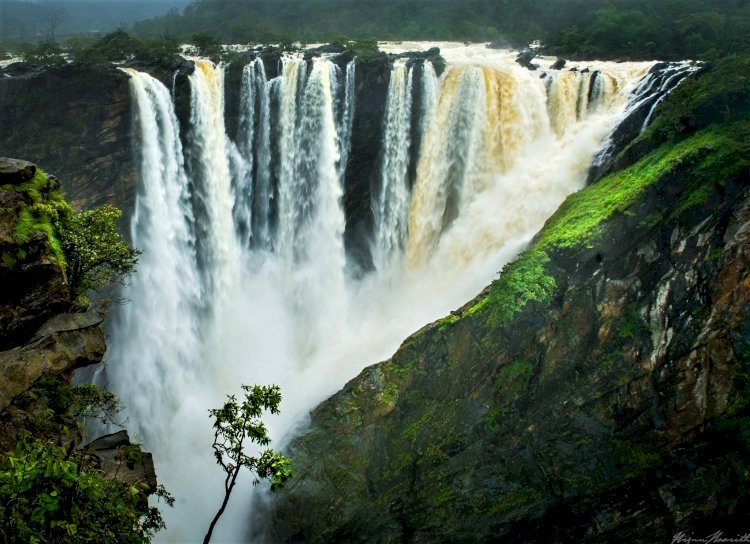 Unlike other waterfalls, Jog doesn’t flow in steps. It is a full-length fall that takes a vertical plunge creating a misty atmosphere around. Being regarded as the highest untiered waterfall in India, Jog drops from a height of 829 feet. With an average water flow rate of 5387 cu ft/s, Jog is ranked 13th in the world by waterfall database

In the offseason, you will find a thin stream of water trickling down the hill. We would not recommend anyone to visit the Jog Falls during summer months due to hot and humid weather and no water 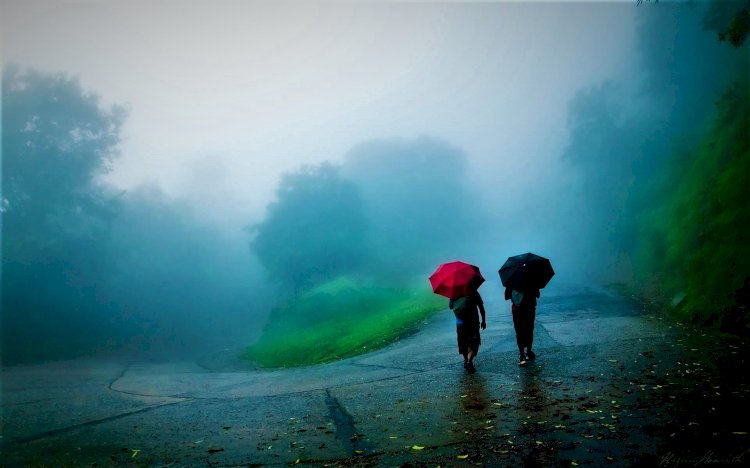 This is the main viewpoint that offers a panoramic view of Jog Falls. You will need to pay an entrance fee of INR 10 per person and INR 20 per two-wheeler or INR 50 per four-wheeler at the entrance to this viewpoint campus. The Hotel Mayura, Gerusoppa run by Karnataka State Tourism Department (KsTDC) is situated here.

B. Viewpoint at the base of the Jog Falls

Right inside the campus of Jog Falls viewpoint near Hotel Mayura, is a flight of around 1600 steps leading to the base of the waterfall. The steps are made of concrete. The descent is easy and takes around 60 minutes, however, you would require a minimum amount of fitness to climb back after spending some time at the base.

From the bottom, one can get a splendid view of the falls cascading down. It is not advised to go down during monsoons, because of slippery rocks and blood-sucking leeches.

C. Viewpoint from the Inspection Bungalow

This viewpoint is right opposite to the Jog Falls viewpoint near Hotel Mayura. It can be accessed through British Bungalow (also called PWD – Inspection Bungalow) and it gives the best view of all the points where the water from the Sharavathi river starts falling down the hill into the valley.

The picture-postcard beauty of Jog Falls remains etched in our memory forever. If you haven't been to Jog Falls,  yet then it is one of the must-visit destinations in the Shimoga district of Karnataka. Visit during the monsoons to get the best views of Jog Falls. Truly, it is a bliss to witness the waterfalls playing 'hide and seek' with the rising mist during rains. Don't forget to carry an umbrella with you or get drenched. Don't miss out on one of the best waterfalls in India.

So, these were a few facts about Jog Falls. Hope you found them interesting and informative. So, do remember when are you planning for your next trip to Jog in Monsoon ?

If you are coming from the northern parts of India, you can catch a train to Hubballi railway station in Karnataka. From Hubballi, Shimoga can be reached via road, from where you can take a train or hire a taxi to Talaguppa.

Road: Jog Falls is well connected by good roads from both the sides – From Bangalore 410 km – Mysore & Coastal region of Karnataka. Overnight buses are available from Bangalore.