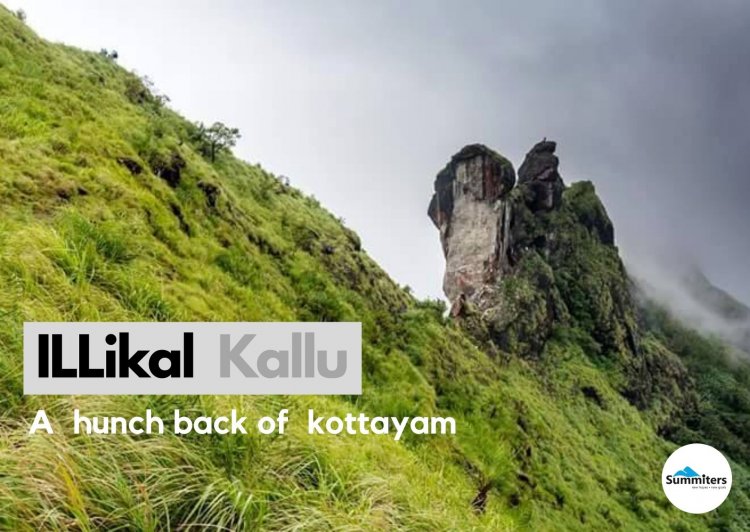 After  a week long tour in Thiruvananthapuram, we embarked on yet another journey,as per my friend Anands suggestion. We reached the ferry point at Allapuza (Allepey ) - Known as the Venice of India, and boarded the local boat to Kottayam.As the boat moved forward we could hear the slicing of smooth water in the backwater. 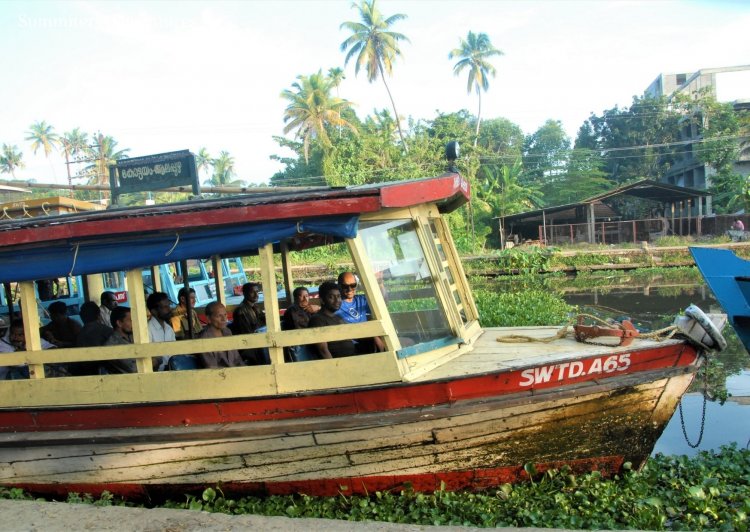 We reminisce in the still but cool morning air of coastal towns touch - and - go breeze, letting the  mirrored trees be our constant companions.I suddenly hear a shrill of sound from rear end, I soon realise that it is a signal for boat driver to make a stop and announce boats arrival for those waiting. Those waiting are the men folk clad in colorful lungis, sporting a beard and children dressed in school uniform. 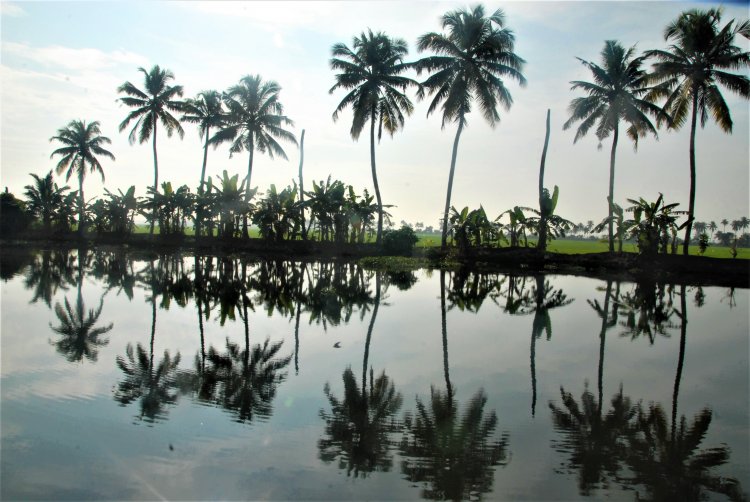 The children waive at their parents and slowly the boat moves forward. The boat is full and buzzing with activity. Fellow commuters chatter in local language, i can hear a song from one of the corner on a smart phone, children are discussing about exams, physics summer vacation, few are reading Malayala Manorama news paper - largest  circulating newspaper.I peep through, they look like some geometrical figuires !.The conductor in khaki squeezes through crowd to issue tickets.The boat stops at few more places, picking locals all along the Allepey backwaters travelling through.

Our eyes is transfixed at sight of Kingfishers diving in water and emerging out successfully.!. A lonely cormorant sitting on branch of tree is waiting for its turn.

With the arrival of a white house with thatched roof - a typical school structure in Kerala that resemble schools of a bygone era. All children walkout one behind the other.The boat is empty now .The coastal state is said to have highest literacy rate in the entire country.

The channel now broadens and we pass below few bridges across backwater.We see huge houseboats, snake boats passing through and few  foreign tourists peeping through windows trying to greeting us.Boat moves past  backwater, Palm, Coconut trees and Rice fields – the views match the image of Kerala that we had in our mind.

Soon horn blows !. After 3 hours of travel, the boat comes to halt at  Kodimatha jetty.in Kottayam.

I am still in dark and inquisitieve to know the reason to visit Kottayam. I make a guess Vagamon hill station , Kumarkom.. and its wrong ?.The cat is our of the bag, my friends enquires a local in Malayalam,i am told that we are trekking to a peak called Illakal Kallu or Illakal Mala.We eat appam and avil at a local restaurant.After a journey by local bus, for about 1 hour we reach a place called Teekoy enroute Erattupeta, in the evening.

We visit a local Tea shop to have a cup of Kattan Chai - Black Tea We get few brickbats from locals as we mention visiting peak, with demotivating talks such with no guide and no route, water and facilities to stay etc

We see the hillock looming in distance.Armed with few oranges, we move in direction of the hillock. Initially we pass through a rubber plantation, arbitarily, with no sense of direction ,after few minutes hit the the rock face. 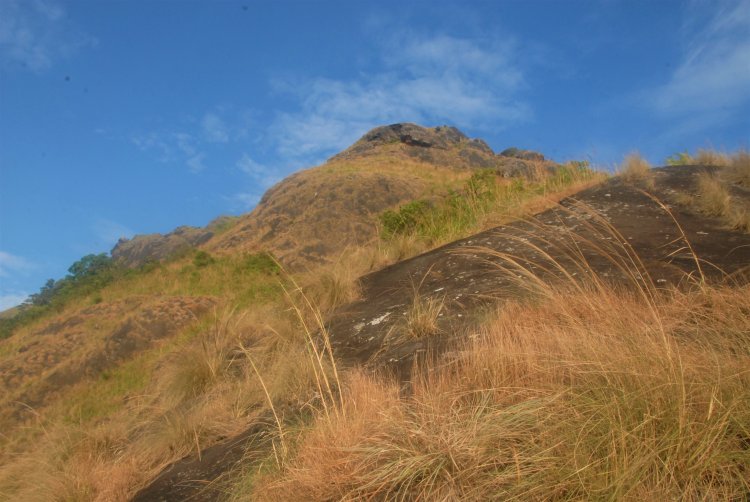 Holding onto to dry grass  which was glowing in the golden light, we surpass the 45 deg - 60 deg rock face.With no soul around to enquire.Our intentions were very clear, to reach the hilltop and camp.. 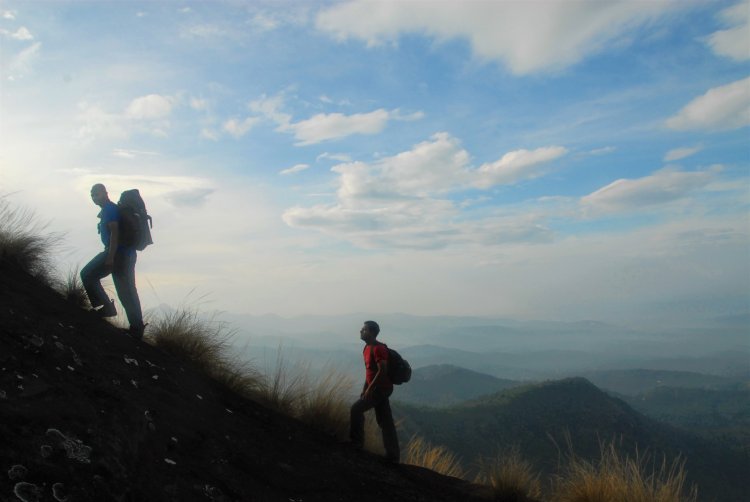 After a good 1 hour of climb we made to the hilltop.Anand banged his bald head to a rock overhanging and cursed it.We could see the hills of Vagamon in the backdrop.

Myself, rency  pitched the dome tent that we had carried on a flat ground and were waiting for Anand.!. 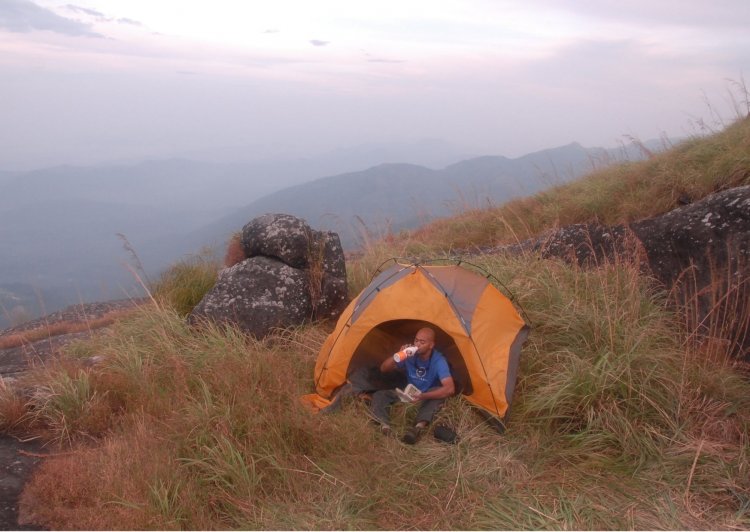 All 3 set out to explore the peak,Intitally we had a partial view of  rock from our campsite.Illikal Mala comprises three hills, each rising up to 3,400 ft above sea level. Each of the hills has a peculiar shape. 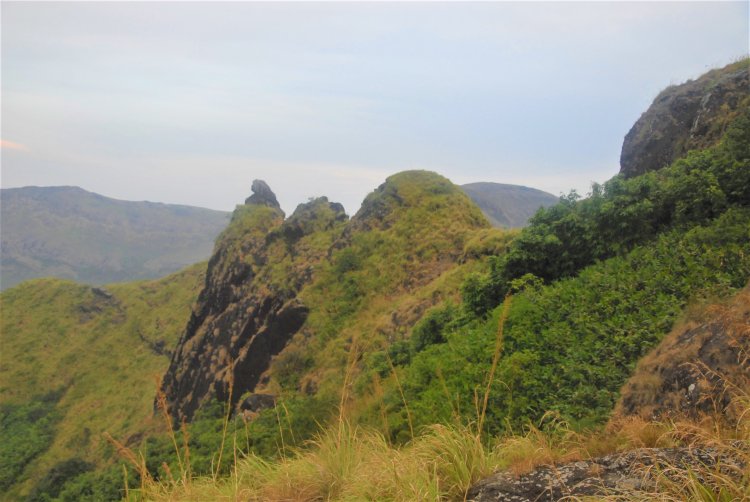 One of them resembles a mushroom, which is why it is known as Kuda Kallu (umbrella-shaped rock). The second hill has a small hunch on the sides and is therefore referred to as Koonu Kallu (hunch back rock). There is a 1⁄2-foot-wide bridge called Narakapalam (bridge to hell) connecting these two hills.

The vertical rock stands high on the ridge, now only one half of the original rock remains, as the other half of the rock has fallen off. 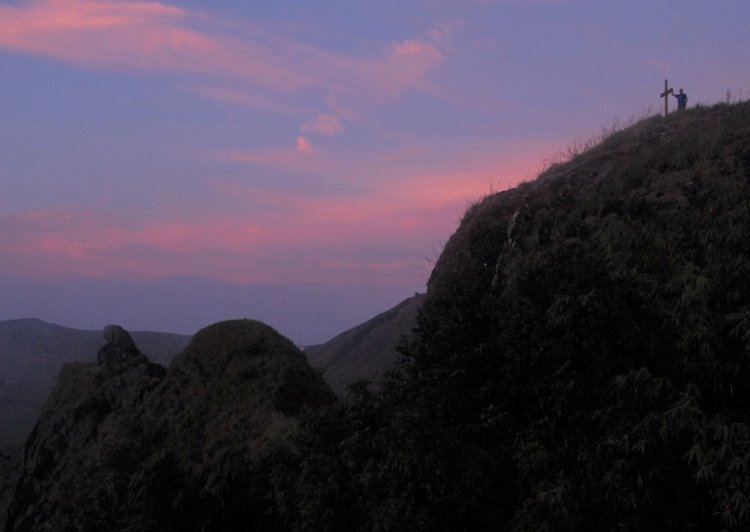 Numerous mountain streams originate from this peak and flow down to form the Meenachil River.The beauty and the landscape of illikal kallu is similar to that of the pillar rocks in Kodaikanal in Tamilnadu.

It is said that the mythical medicinal herb Neela Koduveli grows here. This mythical blue flower is also believed to possess supernatural powers, which could increase wealth and ensure a rich harvest From the hilltop, the Arabian Sea can be seen on the far horizon as a thin blue stroke. 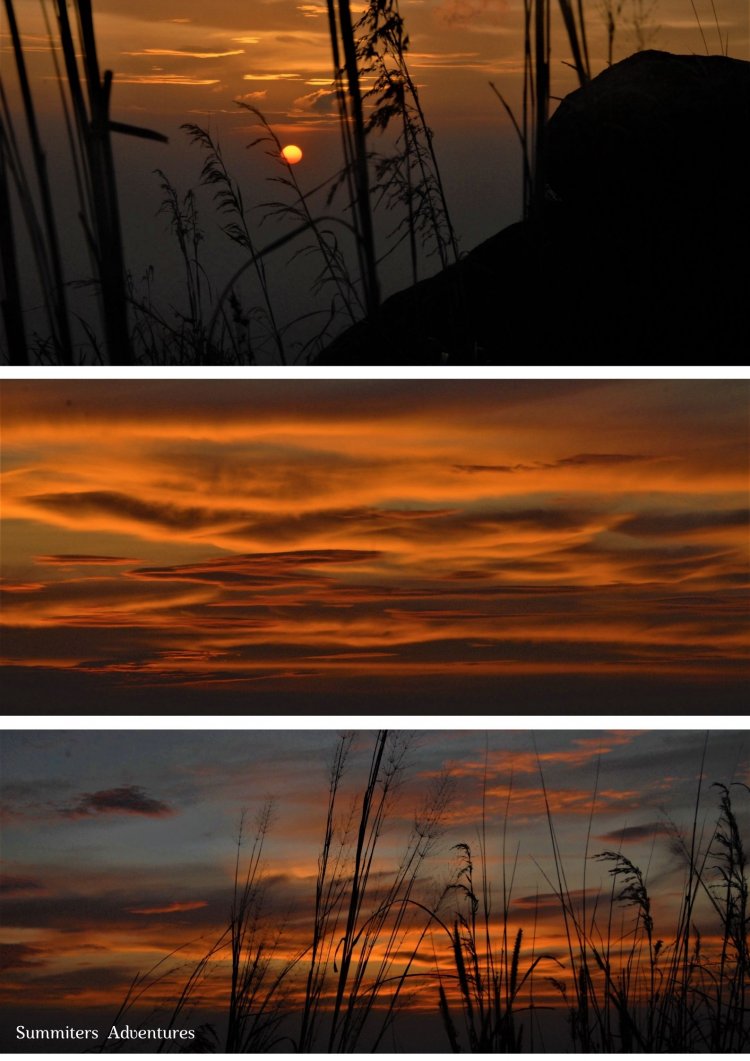 The Sun was literally playing hide and seek with the clouds.The western sky soon changed into bright yellow.The sun who was glowing like a ball of fire, turned vermillion red.The clouds scattered and sky was, with grey/blue tinge with burnt brick red. The layers of reminded of waves lashing to shore in the sea.The silhoutee of elephant grass was mesmarizing like a painting.We witnessed the sunset, till disappered. We reached tent using headlamp. 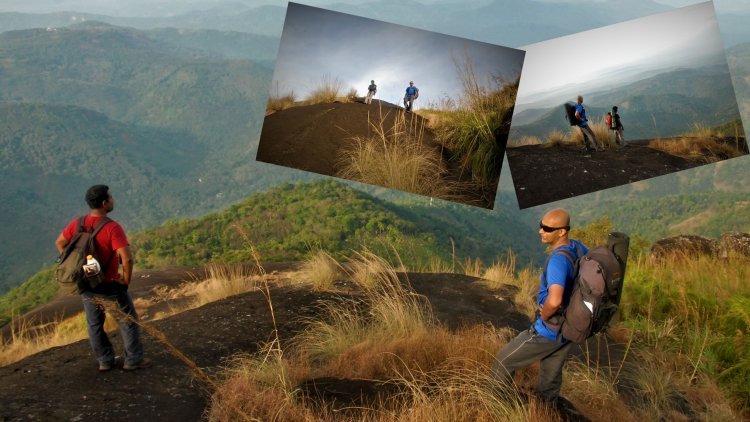 Morning we woke to a unusual sound around 6:30 am.On the rocky bed we spotted few fresh scats, we guessed it to be  of some Carnivore which might have been on prowl previous night.The morning view from illikal kallu was mesmerizing with numerous hills rising to the clouds and the deep valleys.

We packed our tent and started our descent in a zig zag path. We decided to take 2 different routes and later meet at the lonely tree below. Anand and Rency took the rocky path and myself walked on grassy path.

The elephant grass that grew profusely was glowing gloden yellow, trudging through the 3 feet high grass carrying my rucksack became tough, literally losing balance sometimes while even grasping it tightly. Suddenly i was about to step my leg on a huge Indian rock python lying on the grass, literally camouflaged !

It was around 8 -10 feet long.It had blocked the way. Indeed i felt , that i am in its territory. So took a bit detour and hit the rocky path, traversed a bit and reached the base of the hillock.

Later on i came to know through a forest guard while having breakfast that  Illikal Mala , Kannadipara valley and Kattikayam are home to Vipers and Indian rock pythons.

The entry to the top of the peak via Narakapalam is restricted due to a tragedy few years back !. We thanked mother nature and each other for a wonderful trek !