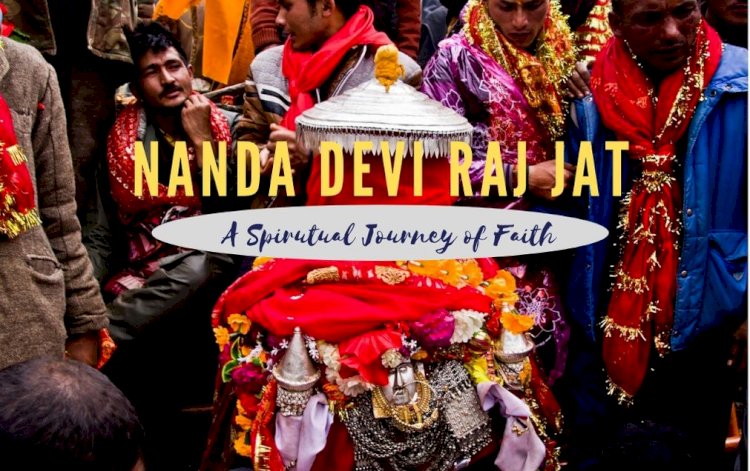 It was during my one of my  visit to Dharansi Pass, Outer Santuary trek of NDBR . I heard the interesting stories of folklore and Goddess Nanda devi, about santuary , explorations of renowed mountaineer  Bill Aitken. I was very impressed after visiting the temple at Lata Karak dedicated to Goddess .My curioisty doubled after sighting the fabulous Nandadevi peak in all its glory after a long wait ,  from Dharansi pass from Close quarters.

During my Himalayan explorations chanting Maa Nandadevi name the bliss giving  goddess was something became common. Slowly Raj Jat yatra of goddess Nanda which happens once in 12 years drew my attention and finally wanted to experience the religious fervour and decided to be a part of it with locals.

Years passed it was in year in 2014. After a walk for 2 days along with my guide from Lohajung , a small hamlet in Mundoli district. I  was eagerly waiting at Bedni Bugyal. Trishul and Nanda gunti peak loomed over in distance.

My  guide Shersingh Rana  pointed at a  black four-horned Chausinga khadu (ram) Nandadevi Incarnates merrily grazing in the bugyal  bedecked in Vermillion red and saffron, which is considered auspicious and with colourful garlands around its neck. Ornated with  jewellery tied to its back, it was clear of its significant role. A role it has been playing for since 900 years back. 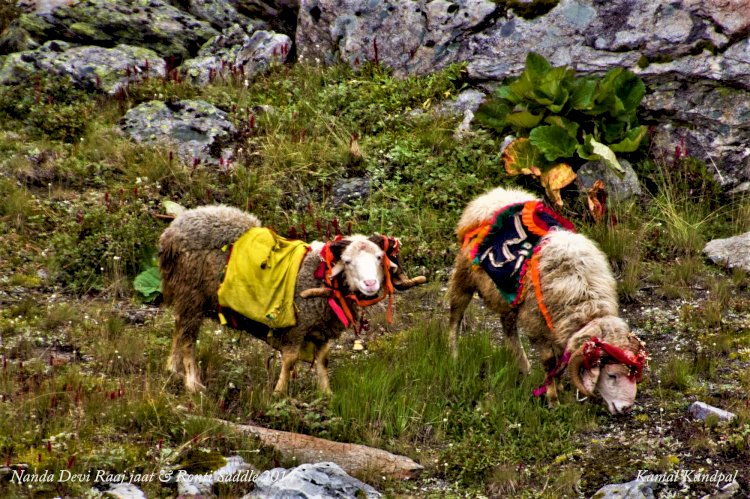 He said “ A year before the commencement of the ‘Raj Jaat’ or the Himalayan Kumbh of Goddess Nanda, priests from Nauti, a village in the Garhwal hills, assemble and plead the gods for the birth of this four-horned ram. And if such a ram isn’t born, the ‘yatra’ doesn’t take off. Not every four-horned ram fits the bill; preferably black in colour, it should be born around Basant Panchami (a festival that falls in January-February) confidently.

The Celebration is is meant to be Nanda Devi’s escort as she returns to her husband Shiva’s abode after a brief visit to her  parent’s house.

The ram in fact leads the procession as it makes its way through the rough hill terrain of 280 kms for a duration of 19 days. During this period, this ‘sheep’ is fed on Roti – Local staple food made of Wheat  alone. "This is a holy meal also offered to the gods. The ram gives up on the regular feed of grass and leaves,"

The two extra horns, as per belief of  hill tribe, help the ram choose the right and ideal path as it carries the Goddess back to her husband’s house. At the end of the journey, this six-month-old sheep is left all to itself. The ram walks off into the wilderness and the procession returns after the last halt at Homkund. And after its trek of glory, this ceremonial four-legged creature is never seen again.

The Spiritual Journey Raj Jaat dates back to the 12th century.The  King Yashdhaval of Kannauj had married Vallabha, the daughter of the king of Chandpur which was erstwhile capital of Garhwal.According to the hymns and folk songs that are chanted during this festival, the Goddess Nanda, unhappy with the queen’s irreverence for her, had cursed her. As a consequence her kingdom suffered drought, famine and disease. The Raj Gurus then advised the king to go ahead to the Raj Jaat with Chausing Khadu a four-horned ram. A journey he and his family then undertook as per ministers advice. Today, remembering that journey, some of the place-names on the way are linked to the tragic incidents that struck the Yashdhavals as they moved towards their destination during the sacred Journey. A place called Ballawa Swelida (delivery cave) has a cave where the queen gave birth to a stillborn child. Further up, Pathar Nachaouni (stone dancers) – Just above Bagua Basa , reminds the pilgrims how all the accompanying dancers had turned into stones after a sudden blizzard. Even the lake near the final destination is still  there as evidence and said to contain skeletons and hair of troop, still shrouded in mystery which is known today as Roopkund

Our porter adds “ You can still find heaps of bones and hair in the lake." The glacial pond is  ice-covered for 9 months of the year-  Roop Kund, seems to have been the last spot visited by the king’s family, and they are said to have been buried in an avalanche here.

After this, it was Raja Ajay Pal of Chand Garh, who once again started the journey in the 15th century. Since then, members of the royal family (Kunwars) with their pandits known as Nautiyals are following the centuries old  tradition.

It is a celebration for the Pahadi folk, Mountain People  dressed in local attire a day before the procession, a special ceremony where offerings are made to the ram was held in a village 12 km from Nauti. This village, where the ram actually begins its personal journey, is called Kansua. In the local Garhwali dialect, the brother of a king is referred to as Kansa, hence the village’s name. It is said that a seventh-generation king, Shali Pal, finding little time to devote to the procession, entrusted the job to his brother, whose descendants still comprise the population of the entire village.

But before the trek, the ram is first worshipped. To begin with, it is placed in front of a temple that displays silver plaques of Nanda Devi, Shiva and Lord Hanuman. It is then anointed with turmeric and vermilion and given an offering of rice, flowers and fruits. Devotees throng around seeking blessings from the Goddess. All through, the priests keep a keen eye on the sacred Ram  - no one is allowed to touch it. Once the rituals are over, the drummers hype and conch is blown as the festive mood begins.  Men folk known as Jagars  who sing songs to hail the goddess and women folk singers also join in. In no time, men form  a circle clasping their  hands behind their heads, they tap their feet in unison to match the drumbeats and cries of praise  Bolo Nanda Devi ki……Jai…!  Bolo Nanda Devi ki …Jai…!  reverbarates and fills in the air,  finally  echos in the hills.

At Nauti, one of them even pulls out red-hot charcoal from the ‘holy fire’ and dances holding it in his hands. As the spell wears off, most of them prostrate to her in honour to the goddess of mountains.

While some men and women brave the arduos journey till the last point walking with the procession, others accompany the procession to just a few villages, while many others welcome it with fruits and flowers on the way up to the holy hills. The entire journey will take 19 days and the procession is scheduled to stop at 18 different villages to pay homage to the different forms of the Goddess in the small hill temples.

The final terrain from Bedni Bugiyal – A vast Alpine Meadow is the most difficult stretch.Climbing over hills pilgrims reach the mystery lake Roopund in the lap of Mountains.Perform puja to Goddess Nanda again. 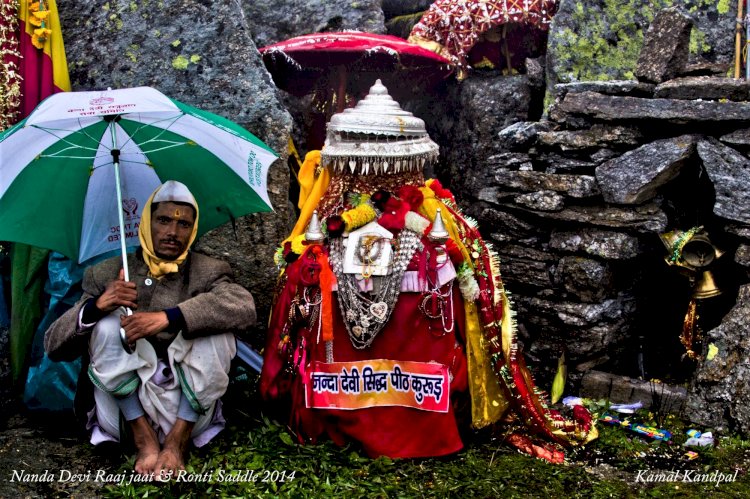 Other folk who were part of previous added that “ crossing over to other valley Shilasamudra known as ocean of stones, crossing  Junar Gali Col  which is above Roopkund lake. 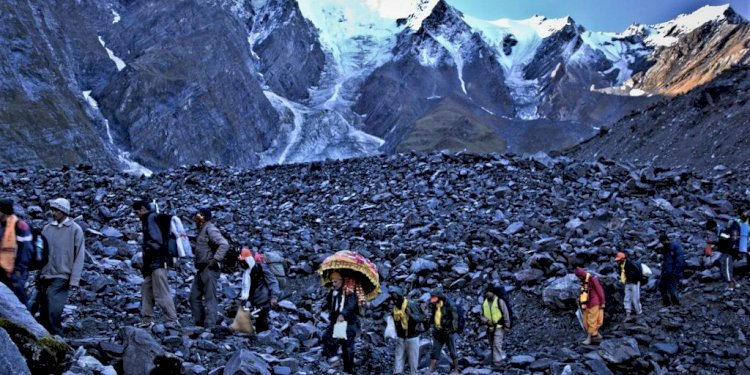 He pointed at the despression in the mountains , its bit risky and which  gives goose bumps .As a part of ritual villagers from a nearby hamlet, Sutol, Ramni and Kanol, help out in this task. They go to the opposite cliff and help the pilgrims over - sometimes they have to physically drag people over. The two mountains are separated by a gap of just two feet. "If one slips, it’s a free-fall to Roopkund, 1,000 feet below, and no escape from death.

Finally the procession, surpassing the hills reaches the last point  Homkund, the  holy lake Shadowed by Nandagunti and Trishul Peak. 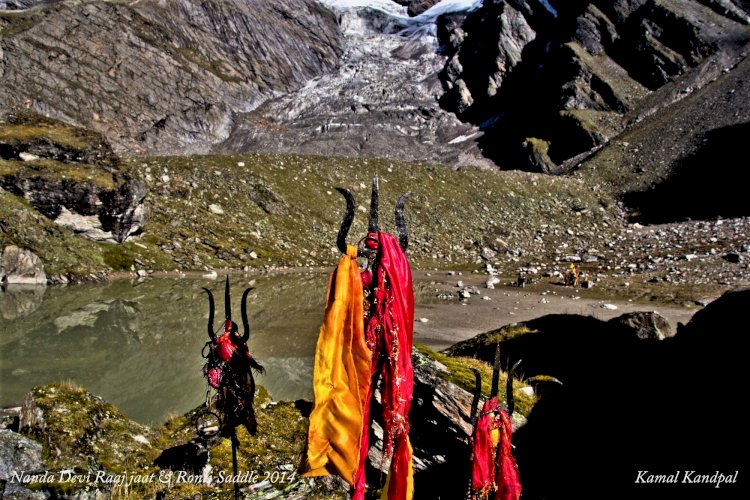 In contrast, the return journey downhill takes just two days, even the route is different and exit at place called ghat . After puja once the ram is set free on its own, even a single soul will not make an attempt  to turn back to see where the animal is heading to...?

Out of curiosity I asked Shersingh ‘ Who will take care of it ?

With his palms pressed together, in reverence and raising in his head facing the  7120 m high snow clad Trishul Peak – The Tident of Shiva glowing in sun above clouds,  without a second thought, where else , Sirji ,  it will reach the abode of Shiva and stay in his company there forever !