Devi Kund lake or Sundherdhunga valley are the best trekking destinations in the Kumaon region of Himalayas.“Sunderdhunga” means the valley of colorful stones. The valley is situated parallel to Pindari valley and kafni Glacier in the Bageshwar district of Uttarakhand State. 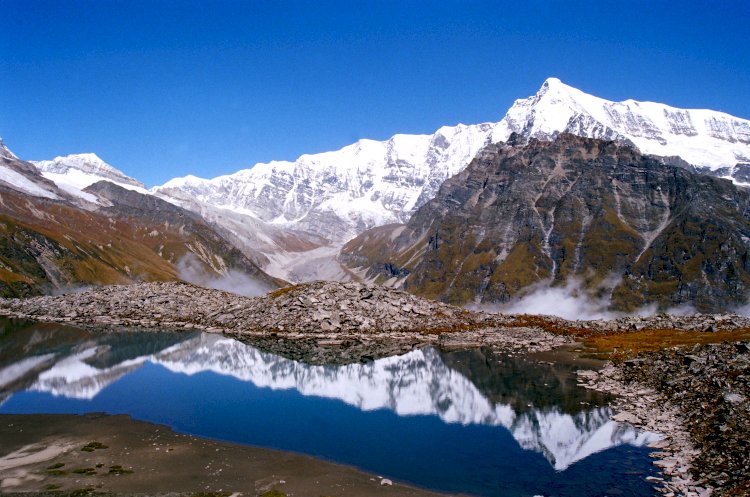 There is a saying among trekkers and mountaineers that the Himalayas start where the mountain ranges of the world end. Here, on the approachable treks & climbing expeditions base camp itself are established at about 13,000 ft to 14,000 ft almost as high as most of the peaks in North America and Europe! The Himalayas are about superlatives. Their magnificence and vastness are such that a lifetime is not enough to a get a glimpse of it all.

We, a small group of four intrepid trekkers had the fortuitous opportunity of experiencing this mighty Himalayan range from close quarters. This time out destination was a picturesque glacier called Sundherdhunga in the western Kumaon region of the newly formed Uttarakhand state.

Our journey begins at 5:30 pm from the Interstate bus terminal at New Delhi. We board a bus for Song, a small picturesque hamlet that is around 40 kms beyond Bageshwar. The route runs through Hapur and Moradabad till Haldwani.

Once you are here, the hills begin thereafter, and the whole character of the journey changes. The serpentine road passes through the mountains and valleys parallel to the legendary Saryu River. The bus leaves after 19 hours of an arduous journey. We decide to spend the night at Song, take a quick dip in the Saryu river next morning and begin the trek all fresh and ready for whatever the day would offer.

We make an early start for Dhakuri 8800 ft, about 13 km away via Dhakuri Khal 9520 ft . The route is a pack track that the mules can walk on. We pass through a small hamlet called Loharkhet 5 km from Song a KMVN guesthouse is here.

This part of the route is common for Sunderdhunga, Pindari, and Khafni glacier till the Khafni village which is 8 km from Dhakuri. We reach Dhakuri in the evening and we set up our tents on a grassy patch, The clearness of air to see the starry night sky. We wake up at dawn to the Aroma of steaming tea. We have to reach Jatoli 6500 ft the last village en route to Sunderdhunga by evening. The trail from Dhakuri is narrow and we pass through some very dense forest, which is home to bears, wild boars, languars, and deer. The route runs parallel to Pindari river, Khati, Wacham, Karrni and Dau are the villages that lie enroute. After crossing the bridge, the route to Sunderdhunga heads west and goes along the Sunderdhunga stream. 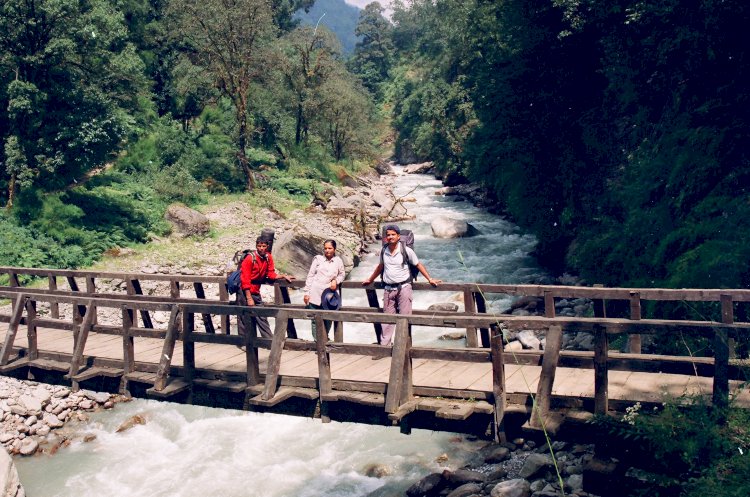 We pitch tents at Jatoli before sunset. We made an early start to reach Kathelia base Camp for the glacier. The route from Jatoli to Kathelia is very narrow. We cross the stream on a log bridge called Bhairav Nala at Dhudiadong. 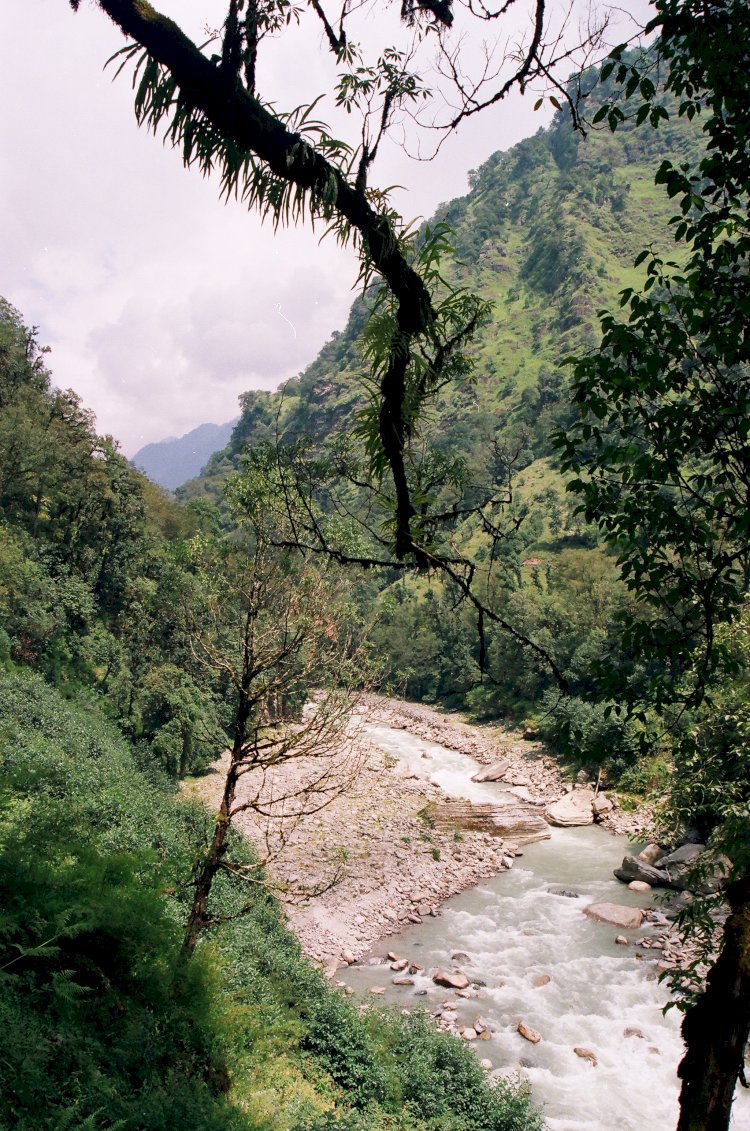 Trudging up slowly we reach kathelia in the evening. The Sunderdhunga River rises from under the glacier and the glacial ice forms a low roof over the flowing water. There is no habitation for miles around. We realised there could be no better place, which could offer peace and tranquility.

Kathelia is a series of bugyals (Grassy Knolls) bounded by towering peaks on all sides. We crane our necks to the limit to get a glimpse of snowclad peaks. Our Porter Dilip Singh dhanu serves us hot spicy tomoto soup and early dinner. Then we hit the sack to ne fast asleep. The next day we leave the camp before sunrise, with the intension of reaching Devikund 14800 ft ‘the abode of devi ‘well before noon. The first rays of sun illuminate the Majestic Maiktoli Peak in all its radiant beauty. As we climb towards Baluni top about 4 km from base, several more peaks become visible with each step. 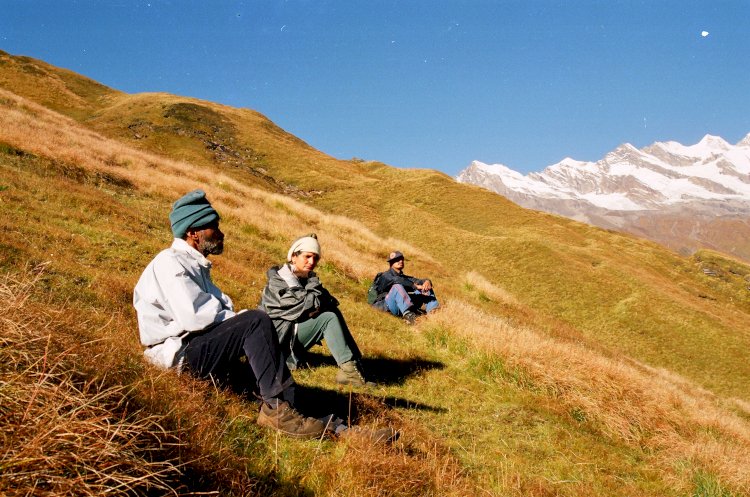 To the east of Maiktoli is Mrigthuni peak, the tallest peak visible from here, scattered around it in a semicircle are the Bhanoti peak, Durga Kot, Tharkot, Tent Peak known as Simsaga Mountain range, Nanda Kot, Bailjuri Peak Panwali dwar known as the ‘cream roll ‘by locals. 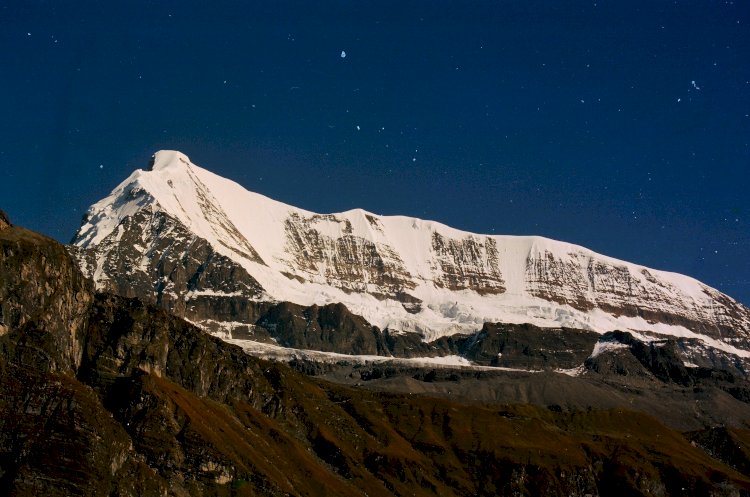 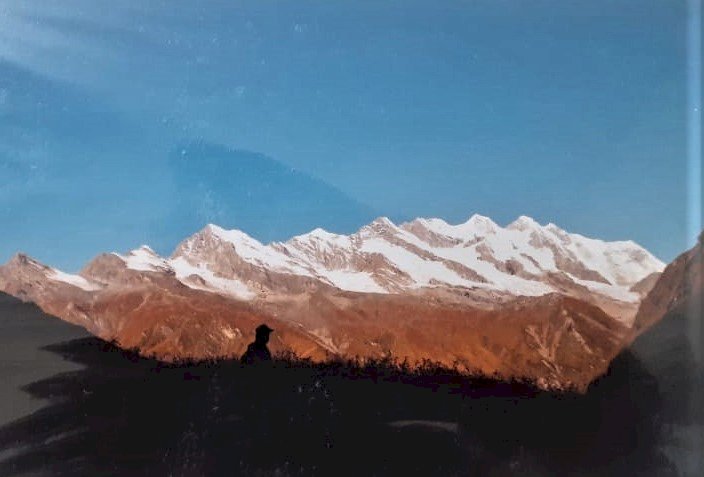 We stop at Baluni top for Breakfast feasting on the sight of the various glorious peaks. We cross the Sukram Alp from where the route bifurcates to the right of Sukram cave. The route on the right leads to Devikund and Nagkund. Devikund is a small lake at the south of Sukram cave. It is frozen in winter. Just past Sukram top there was a tiny lake shimmering in the sunlight. A Vast U-shaped valley totally covered with huge stones lies before us. We decide to call a day and head back to the base camp after offering our prayers at Devikund. From one of the corners of lake I could catch a glimpse of distant peaks Mailktoli and   Mrigthuni peak reflected in crystal clear water. A sight to behold it was and was dumbfounded to witness natures true work of art.

No sooner the sunlight became bright the thick clouds in the valley began rise. The valley is covered with mist. We are back at kathelia by 4:00 pm. The next morning, we decide to visit the Maiktoli peak base camp area. Enroute we pass a small memorial built in the memory of four courageous climbers from Almora who attempted to climb the Maiktoli peak and perished in the attempt at 21,000 ft in 1992.One can get a fabulous view of Mailtoli peak inpregnable wall from Baluni top.

We return to Kathelia by noon. It is our last day at the base camp and it is raining heavily next morning and we retrace our route and are back at Song exactly ten days after we had left. We have travelled 115 km on foot over this period. The sights and experiences shall forever be etched in our memories.