Satopanth Tal is a high altitude alpine lake, located at an elevation of 4600 meters above sea level. Shrouded in mythology in the midst of the snow-clad peaks. Satopanth Tal lake is popularly known as Swarga Rohini trek near to Badrinath Shrine. The lake has its mention in the Mahabaratha epic and its a popular must-visit place among those who are religiously inclined and who are looking for a short hike beyond Badrinath dham. Apart from religious significance Satopanth also become one of the Popular treks in Uttarakhand. This glacier trek offers majestic views of Himalayas. 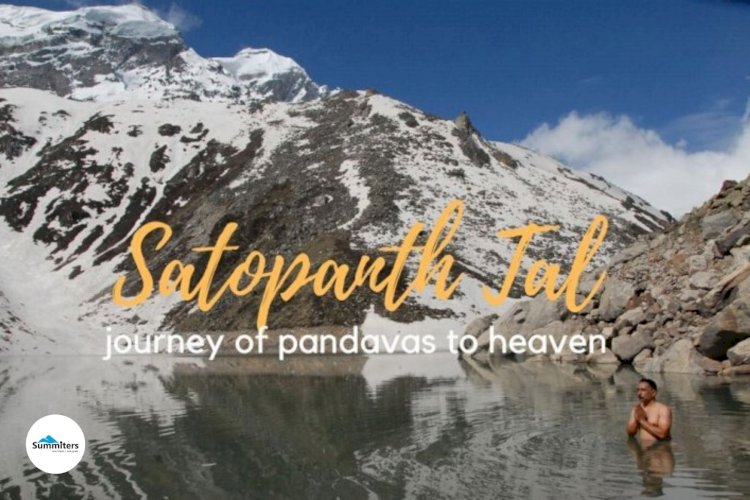 I never give up a person that is terrified,

nor one that is devoted to me,

nor one that seeks my protection,

nor one who is afflicted or destitute,

nor one that is weak in protecting oneself,

I shall never give up such a one till my own life is at an end.

The glorious bloody war of Kurukshetra and the subsequent victory of the Pandavas is very well known to each ear of modern-day India but what remains mostly unknown to us, is what happens after that war. The 17th book, Mahaprasthanika Parva, of Mahabharat, tells us about the aftermath of the war. The book describes that for a good 36 years the Pandavas ruled the Hastinapur and when their time and purpose in the earth was coming to an end, they left for the final journey to heaven. The very same book gives details about the only way to heaven in the human body which was taken by the Pandavas too. Amongst the giants of Himalaya, Mount Meru is one of the most sacred mountains and it was on top of this mountain where Indra came with this chariot to take Yudhishthira to Heaven.

While the final exchanges happened on the top of Mt Meru, the path Pandavas followed to reach the top was through Satopanth glacier. The name Satopanth can be broken up as Satya     Path, meaning the way of Truth. Searching for the truth in mythology, we undertook the same journey and decided to follow in the footsteps of Pandavas to heaven, well not all the way till heaven but as far as our human efforts could have taken us.

Having no idea about where the Pandavas started the journey, we had to follow the modern path to Satopanth Glacier, starting from the Badrinath, summer abode of lord Badri Vishal. The journey then continues to Mana, the last village on the Indo Tibet border which is about 4 km from Badrinath. Mana village, also known as Keshav Prayag, is located on the confluence of Alaknanda and Saraswati river. The very first memorial or proof, say as you please, can be seen in form of a rock bridge over the Saraswati, as the name suggests this bridge is said to be built by Bheema when Draupadi couldn't cross the turbulent waters of Saraswati and the river goddess didn't give way to her. 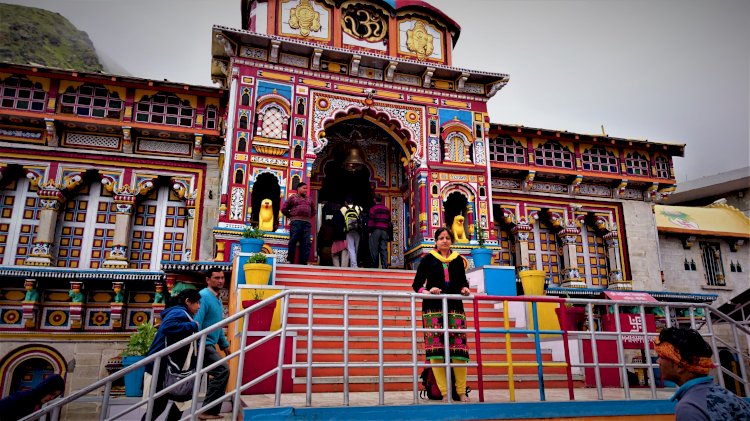 Continuing our quest to see the elusive Satopanth lake and glacier, for the uninitiated Satopanth lake is a glacial lake located at an altitude of 4300 meters. We crossed over the makeshift bridge built over the Alaknanda river. On the other side of the river we can see a temple dedicated to Mata Moorthi, according to mythology Mata Moorthi is the wife of Lord Dharma and the local deity of Mana village. The stories derived from the epic Mahabharata, it is believed that this temple is where Draupadi breathed last on her way to heaven. When Bheema asked Yudhishthira why Draupadi died, he answered that Draupadi was partial towards Arjun and loved Arjun more than the other four husbands of her. The trek to Mata Moorti temple is nothing but an easy one and devotees visiting Badrinath also pay a visit to this temple. 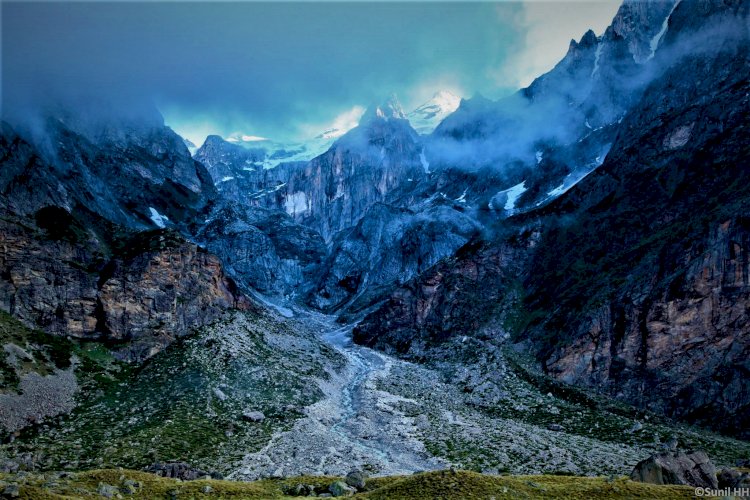 Trekking along the Alaknanda river through the farmland of the locals soon we entered Anand Van. We came across a cascading waterfall, Vasundhara Fall, on the opposite side of Anand Van. With water falling from a height of 150 meters, Vasudhara Fall creates a foggy scene around the valley, the myths and folktales attached to the waterfall say that the water of Vasudhara fall does not fall on the people who have done any sin in their life. For us the falling water was tempting enough to get under it but afraid that our sins might get exposed, we blamed the steep climb to get to the fall and moved ahead with our trekking party. 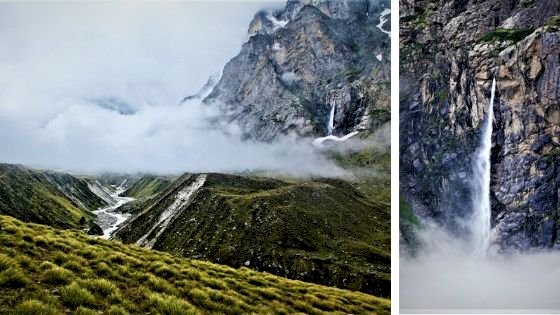 The next stop on the path of truth, Satopanth, is Lakshmi Van about 4 km from the Vasudhara Falls. Lakshmi Van is a cluster of birch trees, Locally known as Bhojpatra which are used to write upon. Located right behind the Narayan Parbat, it is the place where Sahadev died. Surprised by the death of Sahadev, Bheema asked Yudhuster who seemed quite unaffected by the death of his brother, about the reason of Sahadev’s death. Yudhishthira explained to Bheem, that Sahadev like all his brothers was quite vitreous but he had the sin of pride and vanity, he thought of himself wiser than all others so he wasn't permitted to enter heaven in his body. Lakshmi Van is generally the first camping spot on this trail.

As much as we wanted to stay put at Lakshmi Van and soak in the beautiful views, the stories and myths of what lies ahead were also alluring us, the razor-sharp ridges as told by the Sandhus were waiting for us. Lakshmi Van boasts a majestic view of Alkapuri massif, which is according to mythology home to Kuber. The juncture point of Alkapuri Glacier and Satopanth Glacier, the source of the Alaknanda river, can be seen from the trail. Along on the moraine of the Satopanth glacier, we could see thousands of tiny waterfalls falling from the hills and creating a pond at the base of the mount Neelkanth, this place is known as Shashtradhara, literally translating as Thousand Waterfalls. 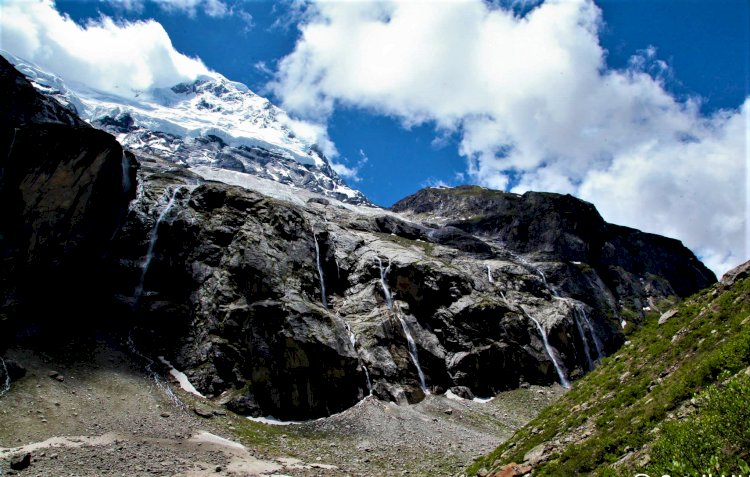 Whether it is the ease of access or modern equipment that enabled us to cross this place but the Pandavas were not that lucky in this matter. As the stories go, it was at Sahastradhara where Nakul died on the journey toward heaven. What has become mundane, Bheema asked Yudhishthira about the reason why Nakul was not allowed to enter heaven in his human body. Yudhishthira explained to him how Nakul always thought that he was the most beautiful and attractive man than everybody else. Parvati, Neelkanth, Swargarohini all are steps that ascend to heaven. The sound of boulders rolling down the valley, the falling water, and the whistling winds create a symphony for the path of truth.

Trekking along the Satopanth glacier the next destination on the trail is Meadows of Chakratirth, in the shades of Chowkhamba massif this place gets its name from a mythological story, according to that when Lord Krishna rested his Sudarshan Chakra on the ground, it got flattened with the pressure and weight of the Chakar. This place is also significant in Pandavas journey toward heaven, as per the stories and folktales of the locals of Badrinath region, Chakratirth is the place where Arjun died. It is not only the mythological significance of this place that makes this place special but the grandeur of Chowkhamba Massif makes it enchanting enough to allure each and every one believer or nonbeliever alike.

The last ascent from Chakartith towards Satopanth lake was not that steep, the trail which is quite similar to that of Tapovan, went over the boulders, crevassed glacial moraines. We were not quite able to see the lake until we reached the shores of the lake. Some of the mythological stories suggest that every year on a particular day, Brahma, Vishnu, and Shiva meet here at the lake for the holy bath in Satopanth Lake. 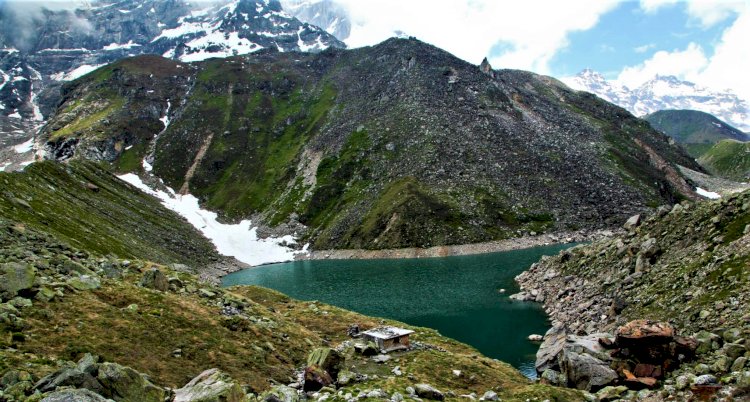 The remaining Pandavas, Yudhishthira, Bheema, and the dog that had accompanied them all the way, reached the lake and it was at the lake where Bheema fell to his death. Falling to his Bheema asked his elder brother about his sin, Yudhishthira answered that his sin was gluttony. He ate without thinking about others and always took false pride in his strength. The path of truth ended here for Bheema as well as us but not for the Yudhishthira and the dog, they continued the ascent toward Mount Meru (Sumeru). As per the epic, Lord Indra arrived at the top of Mount Meru with his chariot to receive Yudhishthira, and take him to heaven. When Yudhishthira asked whether the dog can come with or not, Lord Indra denied and said only he can board the chariot. Yudhishthira then said he will not abandon the dog, that is when the dog came in its original form, that of Lord Dharma, who is the spiritual father of Yudhishthira.

The trek to Satopanth Lake, following in the footsteps of Pandavas on their journey to heaven, is laden with all the mythology and legends of Mahabharat epic. The victorious we enjoyed a holy dip in the lake before heading back to Badrinath Dham. If you have some prior experience of trekking in high altitudes of great Himalaya then it is the best option for you to witness the grandeur of the Himalayan peaks and get to know about the folktales and myths of the region. After a farewell puja at Badrinath, in hope of coming back soon, we bid goodbyes to the mighty Himalaya.

(Note - As Mahaprasthanika Parva does not fully describe the journey toward heaven, there are various opinions about the spots where Pandavas died, if you have any credible source for the same please let us know so that we can make corrections if needed.)