A less traversed High Mountain Borasu Pass connects the Harkidhun Valley of Gharwal to the Baspa Valley in the Kinnaur region of the Himalayas bordering Tibet. The pass that can be traversed post-winter is suitable for seasoned trekkers. 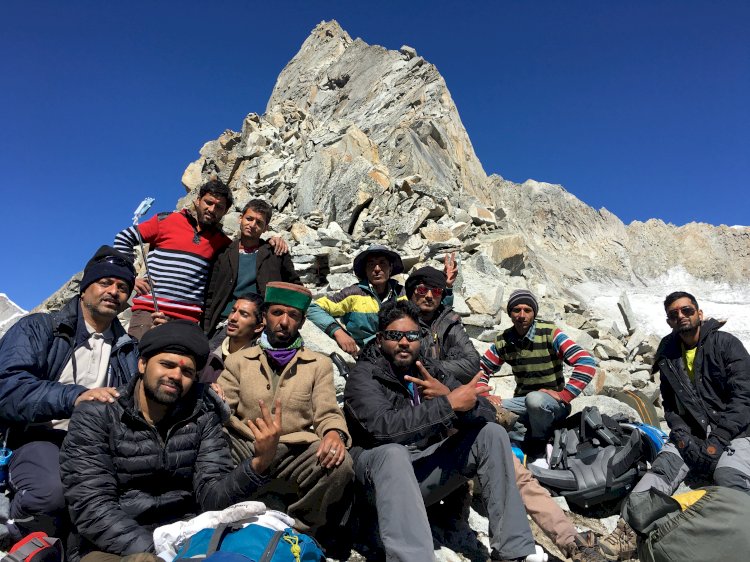 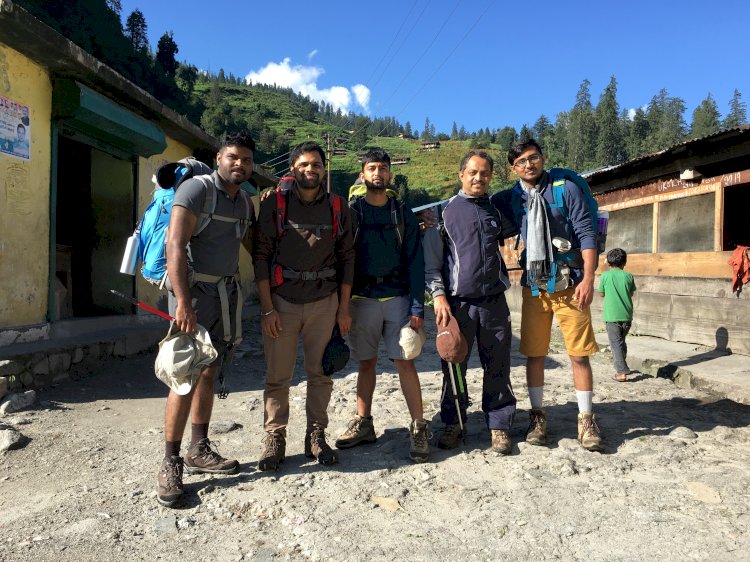 A tryst with Himalayan pass Borasu

It was on one Friday evening I reached home tired and frustrated, not because of any hectic work schedule at the office or a complex escalated situation at work, but because of the nasty traffic on the road.  It took a solid 4 hours to cover 20 km from my office to home.  Trust me, these everyday difficulties are the ones that push us to something completely divergent, diagonal, and unique attempts by us once the frustration reaches the limits.  One such de-stressing methods that I have adopted for about two decades now is a Himalayan Mountain trek.

Immediately I contacted my old friend Vishwanath of Summiters Adventures, who is a professional High-Altitude Trek guide with whom I already had done several high-altitude treks since 2010. Surprisingly he invited me for less known High altitude Borasu Pass trek connecting valleys of Gharwal and the Kinnaur valley of Himachal Pradesh. Though it was the time of festivity at home,   I wasted no time in enrolling myself as the sixth member of the expedition.  I didn’t look back from thereon.  Sent the leave request to my boss, booked my air tickets to Dehradun, and got my hiking equipment dusted and ready to carry.   The rest of my heavenly experience in the Himalayan mountains thus began and alas, all my frustration and tiredness vanished in a moment.

I left Bangalore and reached Dehradun on the 2nd of Sept 2016 and checked into a hotel on the Court road in the Dehradun city.  I met the rest of my team members there at the same hotel.  Sudarshan, Sujay, Sameer, and Prashant who are all your IT professionals in the 26-27 age group (pic – author second from right).

Next morning, we all boarded the Mahindra Bolero Camper Jeep after breakfast and reached the Forest office at Sankri (1990 m altitude) where we had to obtain the ILP (Inner Line Permit) to enter the Govind Pashu Vihar National Park and Sanctuary of Uttarakhand.  Had to provide copy of a Govt. of India issued identity card and some basic information like postal address, age, emergency contact number at back home etc. Continued in the jeep for another 10 kms to reach our first Camping site Geongad which is a small Bugiyal meadow just by the side of the Tons River roaring downhill.  Bugiyal is a flat land suitable for tent pitching.

Geongad being the first campsite of our trek, it was literally heavenly feeling for all of us.  The energy levels were quite high, expectations were let free and ‘one with nature’ kind of feeling in the open air after having spent a long time of our busy ‘enclosure’ life in Bangalore!  We there met our compatriots for the rest of our expedition, Chacha Ji (Bahattar Singh Rana) the 45 year guide from Osla village in Uttarakhand, Prakash the young chap son of Chacha Ji, Devender Singh, our chief Chef and Raju, Shurbeer Singh & Janak Singh who were the porters for the expedition.  Nice lemon tea and milk tea were served to us which was so much refreshing and rejuvenating for us.  As it fell dark, the roti, daal, subzi and chawal dinner was all ours to be enjoyed in the heavenly meadows with the river Tons gently tumbling down the rocks.  We had to wait for some time for the clouds to clear and there opened up the lovely universe that showed up infinite sparkling celestial bodies in the sky.  I bet we can never see any time in our urban cities such a night sky with no part of the sky without sparkling celestial bodies.

The next morning we got up early at around 6am, enjoyed the morning tea, and then the breakfast and picked up the packed lunch Devender Singh had prepared for us.  Being the very first day of the hike, it took some time for us to gain the comfort of the speed of walking.  Tall Deodar trees which rose to 150 to 200 ft tall along the slopes of the mountain and the lush green plants in between them, the constant branch hopping and squeaking black-faced langurs were something I had missed for a long time.  Small waterfalls all along added to our delight. 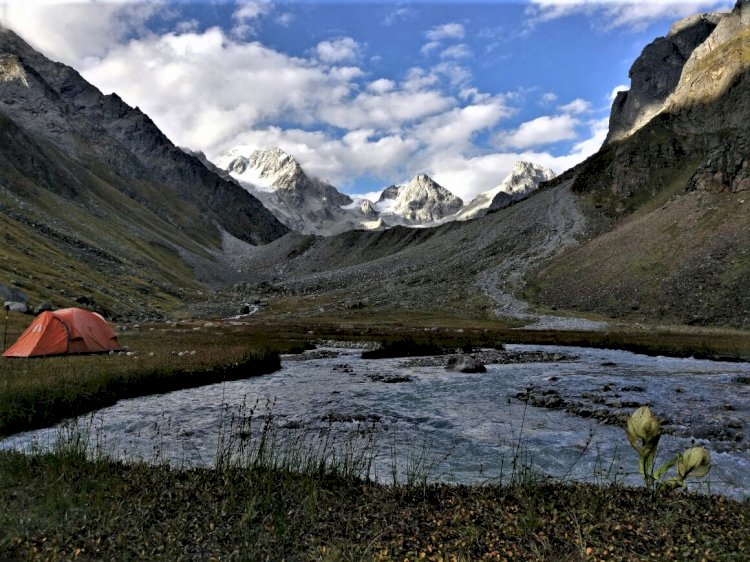 It was very tiring to scale those ridges one after the other trickily maneuvering the tons and tons of rocky boulders of the size that range from a tennis ball up to a big apartment.  We had several events to remember. One such is, Sameer had his shoe soul come off on a morning about to start the day’s hike.  Chacha ji, our guide helped find a solution to it, by tying the shoe with plastic thread all across and plastic cover stuffed inside to prevent water seeping in.

We finally reached Upper Lamjunga by around 4.30pm on the 5th day of our trek.  Lamjunga is an altitude of 4550 m or 14,928 ft. and hence everyone complained of mild headaches which is mainly due to the altitude gain and the cold. 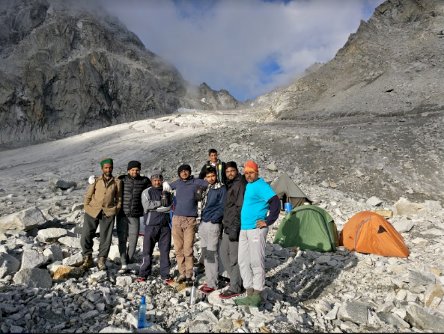 But once we had some hot lemon tea and soup, we were feeling good. We could see one of the porters, Raju, walking uphill towards the Borasu pass while we were all relaxed and stretch a bit and loosen our muscles.  We were wondering if this guy didn’t have enough with a 10 hr trek all day and wanted more!!  Finally, after almost an hour and a half he came back and told us that he wanted to check the status of the crevasses up there as an assessment for next day’s crucial part of the expedition. He sounded positive, for much of our relief.

Upper Lamjunga at 4540 m altitude, is the Base camp for the Borasu Pass overseeing the steep snow slope, almost at around 60 to 70-degree gradient.  We slipped into the sleeping bags much early in the day, at around 6pm itself, since the next day crucial climb to the Borasu Pass had to start at around 6am.

After a 4-hour steep climb and several crevasse crossing which scared us to the bone, we finally reached Borasu Pass which is 5450 m or 17,880 ft above sea level, at around 10am on the 6th day of our trek.  We were so very much delighted that we started jumping and hugging each other in appreciation forgetting completely all the lung buster climb and bone scary crevasse crossing.  Chacha ji, performed the Pooja at the pass and distributed sweets to all of us.  We prayed Lord Narayana and Lord Shiva with some Veda chants played on our mobile phones.  Mother nature fully supported us with absolutely great weather, no clouds, no wind!!   We had a fantastic view of all the peaks around viz., Ranglana, Swargarohini, Kalanag, and many others.   It was a feast for eyes we waited for so long.  We stayed there at the pass celebrating the achievement for about half an hour and then started the descent.   It was quite sunny at the pass and not much of snow and hence we had a very good view of all the peaks overlooking the Borasu Pass.

We started descending and very quickly realized that climbing down is as scary as climbing up the snow slopes.  Yet again we hit several big crevasses that qualified to be the toughest ones in our entire expedition.  Our guides stuck the snow axe on the upper end, tied rope and we had to cross the crevasse clinging on to the rope. Some of the crevasses were about 10 to 15 ft wide.  We had to use a waist rope with Carabiners to cross the crevasses.

Once we descended to around 4000m it was more of maneuvering the moraines (large rocky boulders) and walking long distances. We reached Bonga which is the Lower Base camp for Borasu Pass by around 8pm and it was almost dark while we settled down at the campsite.  It was a long 13-hour hike that day and all of us were 100% exhausted.

We all got into the Kitchen tent to finish the dinner and straight hit the sack.  It was very satisfying that we all accomplished what we wanted to, more so without anyone hurt, and at the same time tired to the bone.

Finally, on the 8th day of our trek, we reached Chitkul which is a small town on the Himachal side where we can find lots of lodges that are mainly occupied by westerners.  Chitkul has an ITBP post as well and just before we entered the town, the ITBP jawan stopped us and checked our identities and ensuring that we were all adventure hikers, he let us go further.   We took a Mahindra Bolero Camper jeep and reached the next small town called Bonga.  Stayed at a hotel in Bonga and importantly had a nice, clean and happy hot water bath!  Much relieved after the hot shower, went to bed.  Of course, we did miss the magnificent open sky with infinite celestial objects which used to sing a lullaby to us all the while during the hike.  The next day morning took a bus to Chandigarh.  A 19 hr bus drive drained all our energy yet again.  Finally took the Bangalore flight from Chandigarh on the 11th day.  Reluctantly we were all into the same machine mode from the 12th day onwards.  However, these 11 days of adventure is a lifetime memory and can keep us charged for at least another year and next year plan would anyways start immediately to start with a location selection.

A passionate trekker with several high altitude trek experience in Himachal and an ardent biker with Leh-Ladhak solo biking experience. A software Professional at SAP.