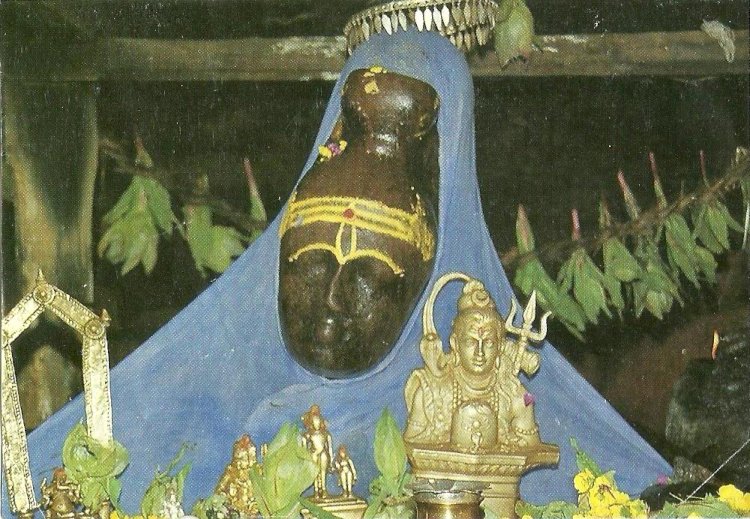 Image of Rudranath in the Sanctum

We had done a short trek in the Gharwal and it was while we were returning from Joshimath, one of the sacred mutts established by Jagadguru Shankaracharya and gateway to Badrinath, that the thought of visiting Rudranath - One among Panchkedar, stuck in my mind.

Winding our way through Pipalkoti - Chamoli, we finally arrived at Gopeshwar our next halt and winter seat of Rudranath. Gopeshwar the headquarters of Chamoli district is situated at an altitude of about 1300m on the left bank of the Balasuti stream ( A tributary of Alakananda ) and about 10 km from Chamoli on the road to Ukimath. There is a fine old temple here surrounded by a courtyard with a trident of iron with a shaft bearing an inscription. Much of the writing on it has been defaced over time.

At Gopeshwar, we were told that there are two routes to reach the Kedar - ne from Mandal Village and other from Gopeshwar. We took the latter one which is most scenic and challenging i have ever traversed.

Tucked away in between the Kedarnath road and much-traveled route of Badrinath is a forgotten path that few discover.                      Rudranath is located 24 kms from Gopeshwar and more treacherous among the kedars. The sharply inclined route to Rudranath passes through dense forest, grassy meadows and seasonal glaciers, not so popular with the tourists owing to lack of facilities.

After performing puja at the temple at Gopeshwar, we joined the pilgrims bound to Rudranath. Passing through Gangol Village we found ourselves amidst pine forest and Rhododendron trees which shaded completely from the rays of the sun. The pine forest gave way to oak and Rhododendron before we reached pulna. After this started the back-breaking climb to Panar through one of the most dense forest I had ever seen. After a grueling ascent, we finally found ourselves at Panar at an altitude of 3500 m. Ahead, the ridge ran sharply to demarcate the Vaitarani and Amrit Ganga streams. Against a patch of bright golden yellow evening light, we noticed a flock of sheep returning from the meadows at Panar. As the sun went behind the mountains we pitched our tents at Panar while the community of Shepards there invited us to share their dinner.

The next morning we started off on our journey to Pitra Dhar ( Dhar - Means Pass ) the highest point 4000 m, where the track is marked by heaps of stones ( Known as Cairn ) on each side. We continued to drag ourselves over the rugged terrain. When we reached the Panchari, the wind seemed to tear away shreds of clouds to reveal brilliant emerald meadows. A carpet of flowers decorated the valley below. There were pink primulas followed by anemones and several species of flowers. Further up, we were in the midst of rhododendron bushes preparing themselves for winter and divine Brahmakamal (saussera obvallata ) flowers jostling for space with the elegant lichen in full bloom.

By now the sun had already dislodged the mist. We could hear temple bells ringing. The sound of the wind echoed in the valleys. In these serene and meditative environs stood the temple of Rudranath at an altitude of 3610 m. According to a legend, the Pandavas worshipped Lord shiva seeking forgiveness for killing their kith and kin. Shiva kept eluding them. While fleeing, he took the form of a bull and sought refuge in to escape from them.  Pandavas noticed a bull grazing near Guptakashi while searching for Shiva. Bhima immediately recognized the bull to be Shiva. Bhima caught hold of the bull by its tail and hind legs. But the bull-formed Shiva disappeared into the ground to later reappear in parts, with the hump raising in Kedarnath, the arms appearing in Tunganath, the nabhi and stomach surfacing in Madhyamaheshwar, the face showing up at Rudranath and the hair and the head appearing in Kalpeshwar.

Pandavas, pleased with the revelation of Lord Shiva at five places in different forms, built temples at these five places, worshipped him and attained salvation with blessings of Shiva. The temples were later discovered by Jagad Guru Sankaracharya.

Rudranath is only an ancient temple in India where the forehead of Shiva is worshipped. The western skies were lit and we could see Nandadevi, Trishul Peak peak, and other peaks floating in the rising clouds and light. The chants and sound of temple bells and the whole place made us feel we were in heaven,! 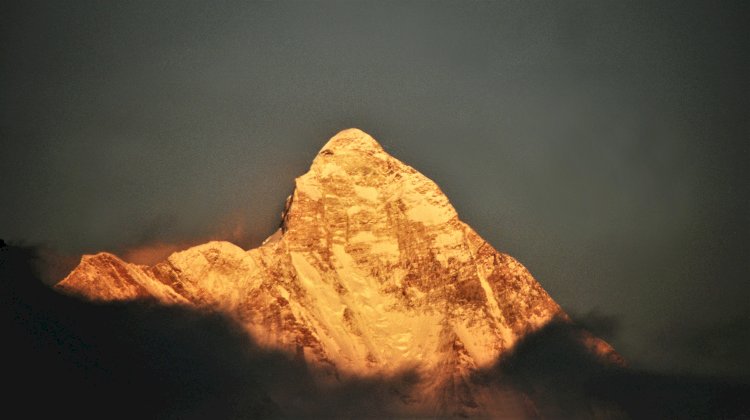