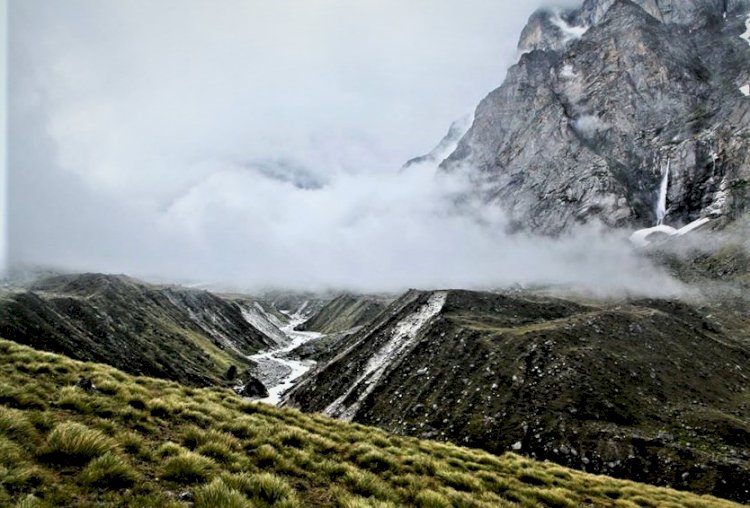 Trek to this Virtual Paradise was in my bucket list for more than a decade.Whenever I used to Visit Badrinath - Abode of Lord Vishnu , or any Expedition around. Either due to  hectic time schedules or any other work I was compelled to move eitherway.

During one my visit to Satopanth Tal in May 2009 , because of a buffer day I reached Mana - The last village 5 kms from Badrinath Dham, on Uttaranchal side a day ahead to scheduled arrival. No Sooner I reached, the  road head  Vasudhara lsuddenly urked in my mind and decided to stay back in Mana and trek next day to Vasudhara Waterfalls.

Though I have seen the falls from other bank of Alakananda river, I was moved by its sheer height, serene location. I just wanted to expereince its beauty, going down.

For the less adventurous , who love to be lost in the lap of nature, Vasudhara waterfalls in the Mana Valley of Gharwal Himalayas is the utimate place must visiting. Mana  is easily accesbile by Jeeps and  Vehicles on Indo Tibetan Border, beyond vehicles  dont go further. 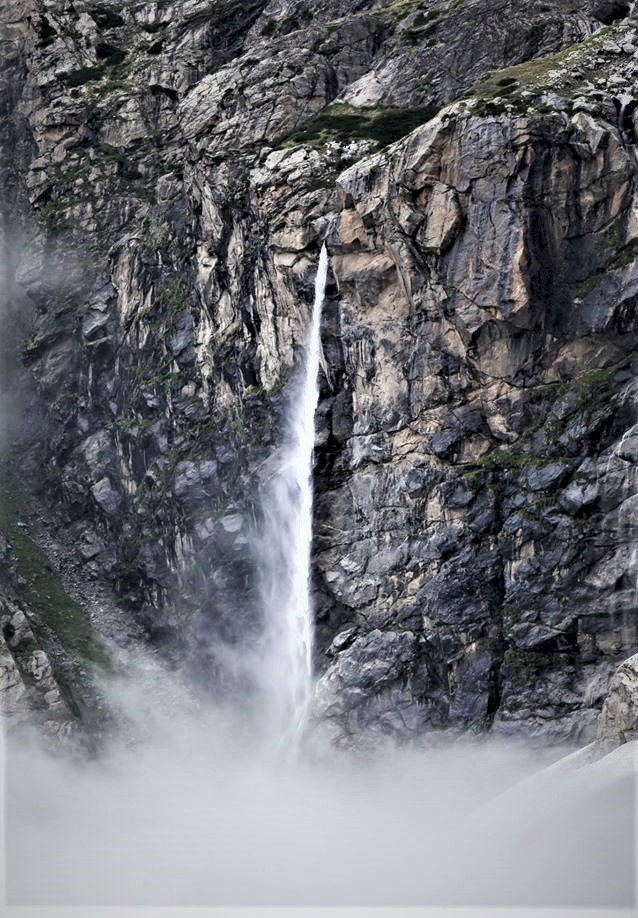 Vasudadhara Waterfalls Cascading in all its Glory

Mana has gained popularity for the Caves ,for piligrims who visit Badrinath,  such as Vyas Gupha , Ganesh Gupha , Narad Gupha , Bheem Phool - the birth place of river Saraswati. There are  few stalls selling locals handicrafts and tea shops.

As i set my foot , cross Bheem Phool, Mana Valley Unfolds and valley opens up gradually, Snow clad mountains on the either side of the trail garners the attention and insists to crane up necks. After walking parallely, for any hour , I could hear and sight of  waterfalls between moving clouds,  the roaring sound of the Waterfalls signalling its proximity.

The Waterfalls is situated at an altiutde of 13,500 ft above sea level.The river Alakananda which takes its birth at Alakapuri cascades here from a height of 350 ft. The water lunges down majestically and the ferocity of water gushing down is an awesome sight to behold.The pearly white water hurtling down at a great speed gives rise to tiny droplets of water.

I was just below the waterfalls and i was gently caressed by the tiny ice cold droplets. Vasudhara got its name after a Devarshi called Vasu Who performed Penance here.The Alakananda river takes birth at a place called Alakapuri  high in the mountains and cascades here, flows further down and joins the river Saraswati at Bheemphool where it is known as Keshav prayag - ( Prayag is confluence of 2 rivers ).

As the clouds swayed by the blowing wind, I could catch a quick glimpse of Mt. Satopanth , Chaukamba Massif and other peaks in the distance. The valley is even mentioned in the Epic Mahabarat about 25 kms from Vasudhara falls is the Snow Capped peak of Swargarohini Parvat. Legend has it that Pandavas after the great war , visited Satopanth tal  enroute Chakrateerth ascended the Swargarohini peak to attain Salvation. Visitors to Badrinath should include Vasudhara Waterfalls in their Itinerary.

After spending few hours , beholding the waterfalls I turned back with a sense of satisfaction !