Bhitarkanika National Park, a eco sensitive zone, with rich, lush green vibrant ecosystem lying in the estuarine region of Brahmani - Baitarani in the North-Eastern corner of india. Known as Mini Amazon of India, is one of the place rated as best wildlife parks for endangered salt water crocodiles. Snugly located on the eastern most tip adjoining to the coast of Bay of Bengal, this wildlife sanctuary is the second largest Mangrove ecosystem in India after Sundarbans. Only place to sight the endangered species of estuarine salty crocodiles and rare species of marine, and wildlife. 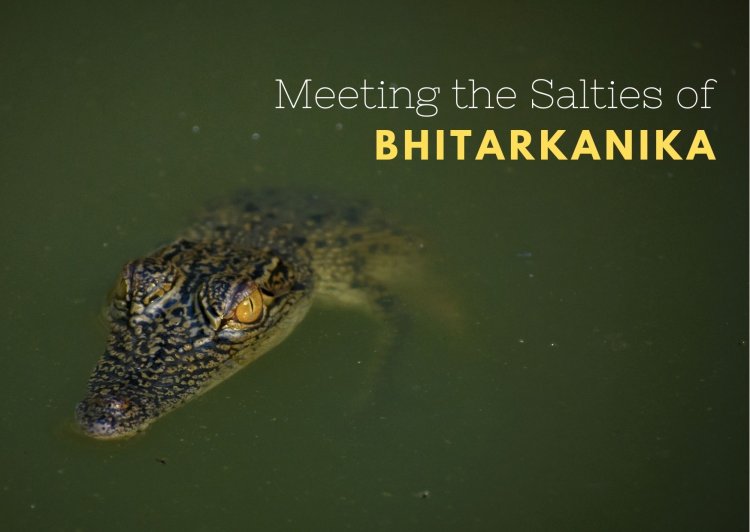 " If you are planning to visit Bhitarkanika, for just 3 days, it is a very short visit and not worth traveling all way " this was the opinion of every individual who knew about this paradise.!

We were traveling from Cuttak to Dangamala, located inside Bhitarkanika National Park.The unusual sights at village marshy lands, paddy fields teeming with bird life.Thatched huts,ideally constructed on the swamp land, with path ways leading to fields,the setting sun, coconut trees swaying in tune to blowing wind.The white lillys, mirrored in ponds smiling at us seemed like, we were in a wonderland !

I found this kind of service first time in my entire travel across India.Kudos to them !

As soon as it was dark, he cautioned us about the movement of reptiles of Bhitarkanika, and was always outside of our Forest Rest house ( FRH) holding a torch ,waiting for us.

He held torch and pointed at the marshy water ponds and mangrove forest, to educate us,and  make us aware area and about the reptile movement in the dark.

We could see a herd of spotted deers grazing freely, a sounder of wild boars scavenging on left over food, in dark. A huge 15 feet crocodile  with a hatchling crossing, the walking path.!

Then only i realised that  Bhitarkanika is a Open National Park which  is the only home to Estuarian Crocodiles.!

Next day, well before the day broke, after sipping hot tea, we took a walk accompanied by Ram,our forest guard upto Jetty and reached at 6:00 am to witness the sunrise.Though a  battery operated vehicle to commute upto to jetty point was avaialble, we were  willing to take a walk, amidst the forest.All the family members were bit scary seeing the reptiles being so carefree !.

We reached the vast expanse of  water backwater.The water level in the mangroves had rised up due to tide, with brahmani river.The mist was rising steadily and we could see butterflies fluttering in golden light, i spotted a common evening brown butterfly posing for my camera lens on a bark of a tree,  dragon flies sitting on twings after a long flight, black rumped flameback, drongos and Spotted doves busy in their morning chores. 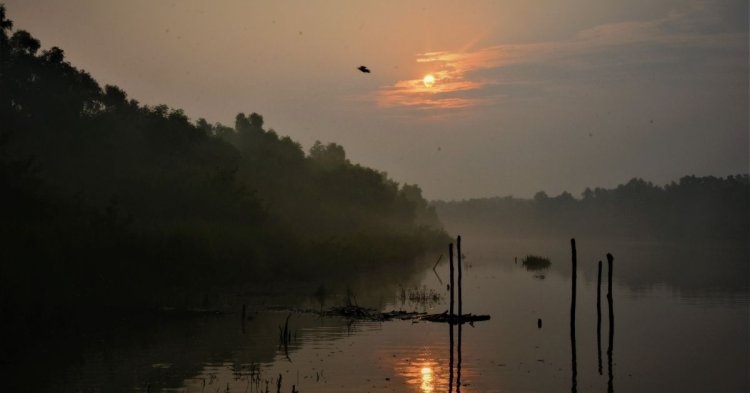 The bright red ball of fire, was making furious attempts to come out of veil of dark clouds.The sound of water and ripples, pretty pattersn on water.The chirping of birds, was nothing short of a live orchestra !.Our guide advised us to head back and go on mongrove boat tour once the water level recedes.As per his advice we walked back, to our guest house along the same path. 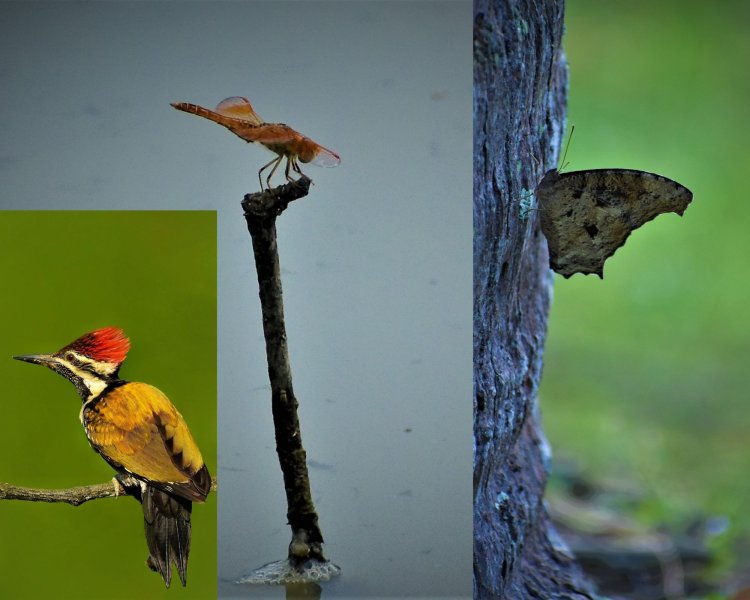 After a sumptuous breakfast we, visited the circular structure, next to Mangorves pond. A place where known as A hatchery is a facility where eggs of Estuarine Saltwater crocodiles are hatched under artificial conditions,The protected eggs, after hatching are carefully in 10 different stages caressed upto 10 years, as in nature its survival is the toughest period for them, as a mere 1% of the newborn survive predators or natural calamities upto they move to natural habitats forever.

The circular structure has enclosures, where hatchlings are carefully protected until they move to abode of nature. 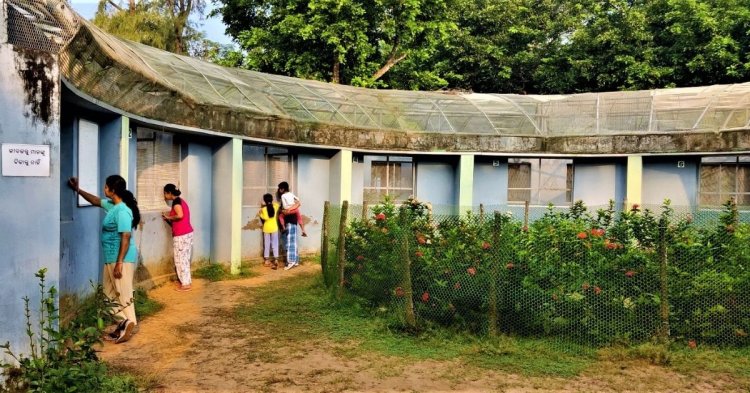 It is said that all 3 species of crocodiles, the Gharials ( With a long snout ), Muggers, and Saltwater crocodiles were on the verge of extinction by the 1970's in the river systems of Odisha. As the numbers delpeted from an estimated less than 100 Saltwater crocodiles to more than 1700 plus in nature has been a long journey in the riverine systems of the Dangmala over the past 4 decades. Today Khola-Brahmani river confluence to Bhitarkanika-Pathasala river confluence are home  to most of them 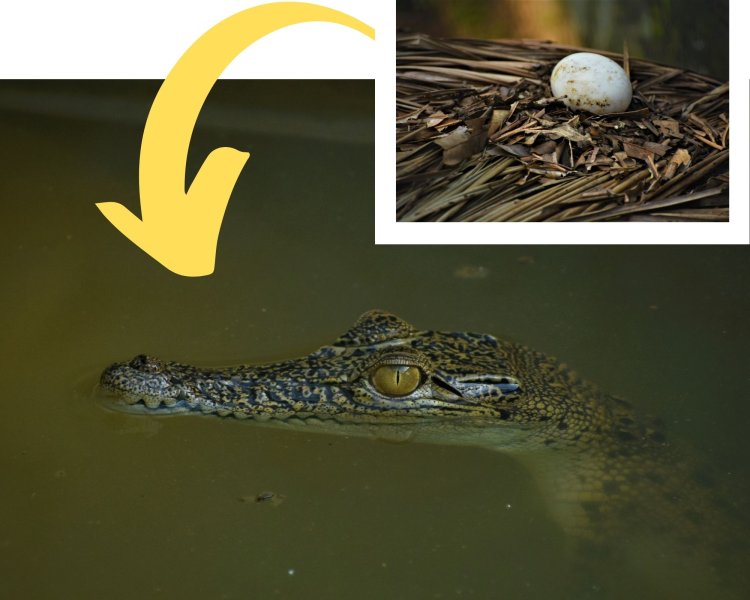 The forest staff unlike at other National parks, though hail from local villages needless of educational background are trained in bird watching, studying Animal behaviour and always come forward to impart information.They respect tourists.

Be it cook in the canteen, forest guide, or curator at the Museum know the names of species on their tip of the tongue.

We visited the museum next to FRH - Bani Bhawan where we stayed. The museum house 18 feet skeleton of a Esturian Crocodile,Antlers of a Deer, Irrawady dolphin. A Shell of a Giant Olive Ridley sea turtle, Head portion of a  19 feet crocodile, Horns of Gaur, few preserved fossils,.Information about Bitarkanika National Park, Birds,Marine life, Fishes,Wet land birds of Bhitarkanika. 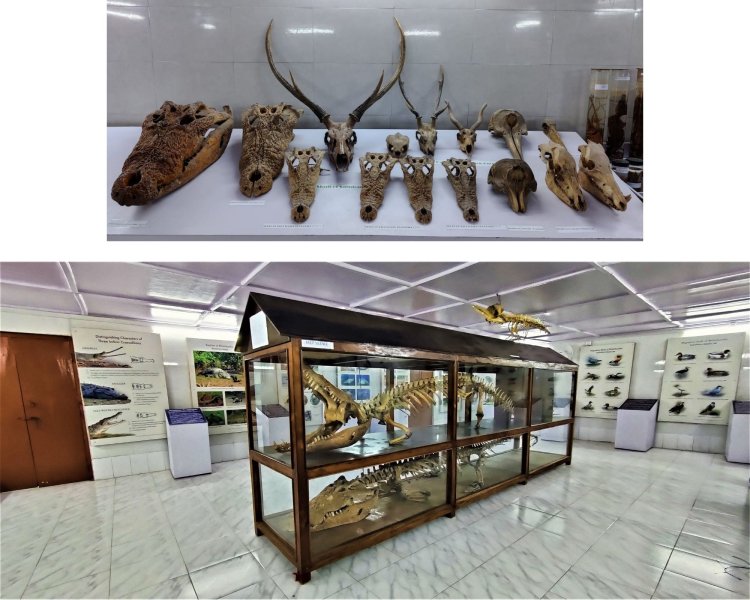 After a early lunch we, were walking in anticipation towards the jetty for much awaited boat ride.To the right hand side, what caught my eyesight was a nursery, where forest staff were busy in work since morning.Looking through foliage, the forest guard, walked to me and started giving all information about MANGROVES and their importance.The importance of plants and his keen interest was admiring.Being one with nature and their role as true ambassors in protecting nature is beyond words ! !

After Sundarbans , the 2nd largest Mangrove ecosystems of India is Bhitarkanika It has.about 62 mangrove species that occur in the Bhitarkanika Mangroves, including Avicenna,Sisumar, Guan,Bruguiera, Heritiera fomes - popularly known as Sundari ( Sundarbans is named after this Plant )  and Rhizophora. Reptiles present in the mangroves include saltwater crocodile, king cobra, Indian python and water monitor. lizard. We were able to identify Cerbera Odallam known as the suicide tree, pocupines eat the seed inside the fruit.The flowers of this tree have a good aroma. 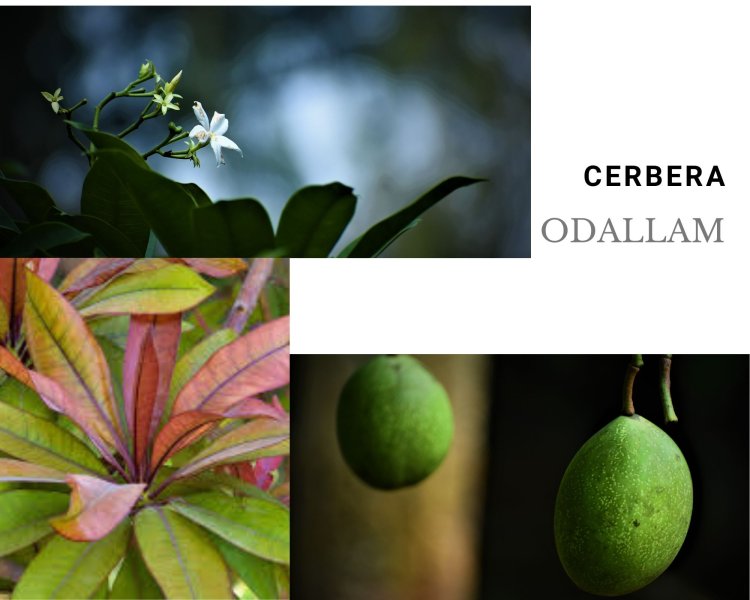 We hired a private boat, at the jetty for backwater Mangrove tour..We were provided with Safety Jacket to individuals, followed by a briefing.The boat passed through the creeks and network of backwaters.Since it was the beginning of the season. their  were only few visitors.The water was muddy and we could spot few crocodiles floating and approching our boat.

Our boatman appreciating our interest was happy to take us to places sites .Short turns and stops around to help us get a better view and photograph the birds and reptiles. He even offered us Bushnell Binocular for better views.The boats being motorboats never can be halted completely or be stationary, so you need to observe and sport a DSLR camera with a powerful zoom lens to capture birds. 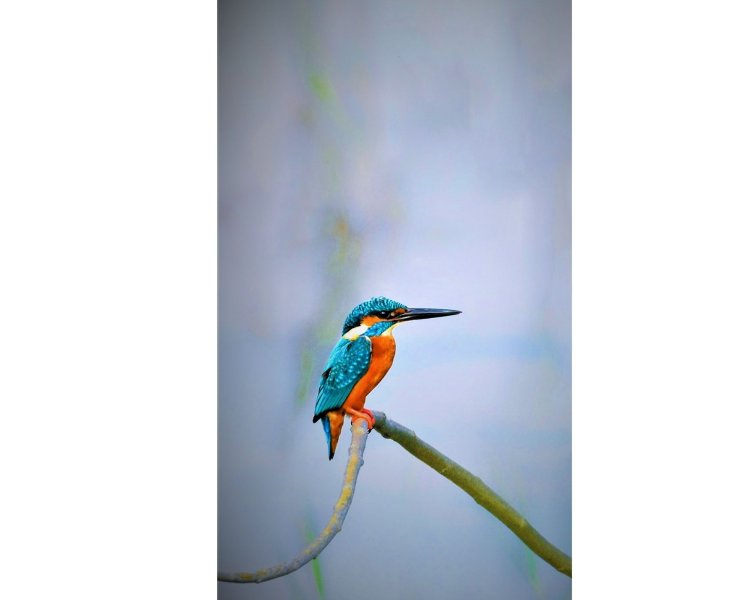 The boat came to a halt, after moving through the Mangroves and creekes.We hiked through the island known for different Mangrove species.We  walked about 2 kms through a green tunnel, with canopy until we reached marshy lands, a sprawling wetlands.It is advised to be with guide,as their are narrow zig zag pathways,leading to different regions.

All of a sudden we heard the sound of Herons, perching on trees, Egrets, Spoon bills which had arrived few days for breeding.The wetland is home for crocodilesand we couldnt move forward, though we had intention exploring the surroundings.The birds were busy in building nest, few in flight and few in fetching food.

A specialized root that grows upwards out of the water or mud to reach the air and obtain oxygen for the root systems of trees that live in swampy or tidal habitats. The “knees” of mangroves and the bald cypress are pneumatophores. Also called air root. 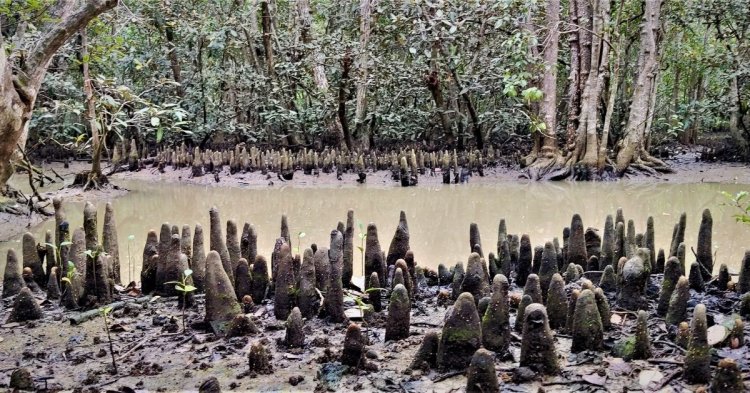 I enjoyed the view of water bodies surrounded by lush green trees, roots reflecting in the waters and creating a visual panorama. A visual treat to eyes ! 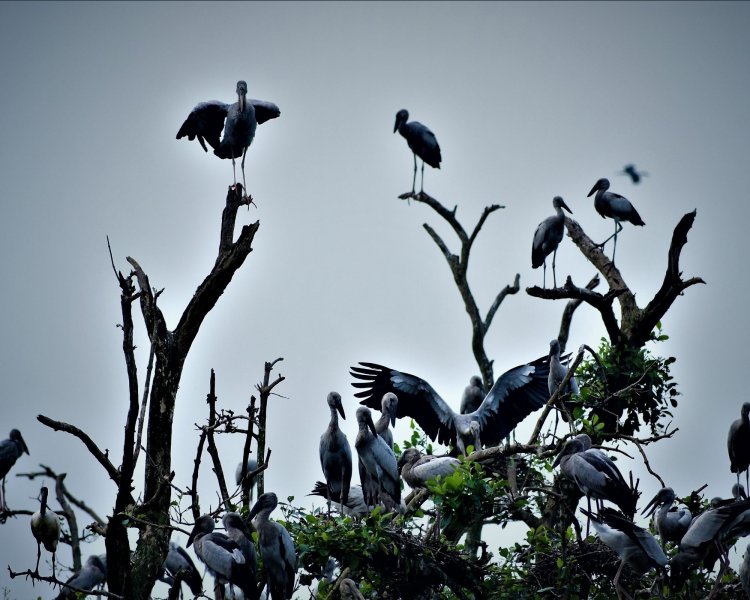 The deafening sound of the birds reached a crescendo, we spent more than 30 minutes, watching them.!. The guide who accompanied us added, " it is just beginning, in coming months January,,february the whole place transforms in a Bird Santuary " and started telling names of few species.I come every time with guests, as i love to watch them ! 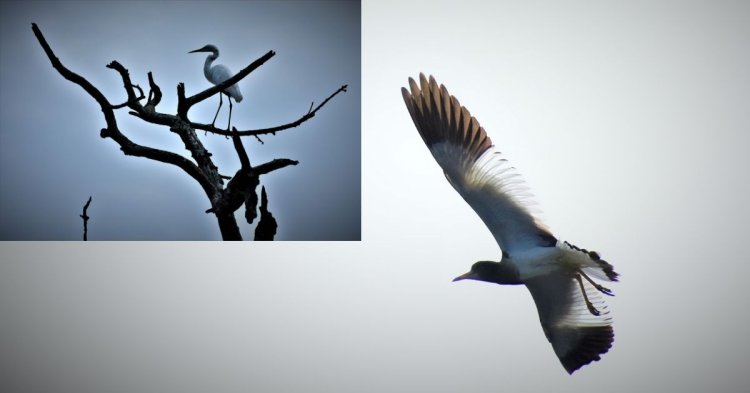 The boatmen cautioned of rising water level, we started moving back.Suddenly a huge Monitor lizard overtook us and ran past towards Mangrove bushes and soon dissapered in no time.I was fast enough to capture it ! 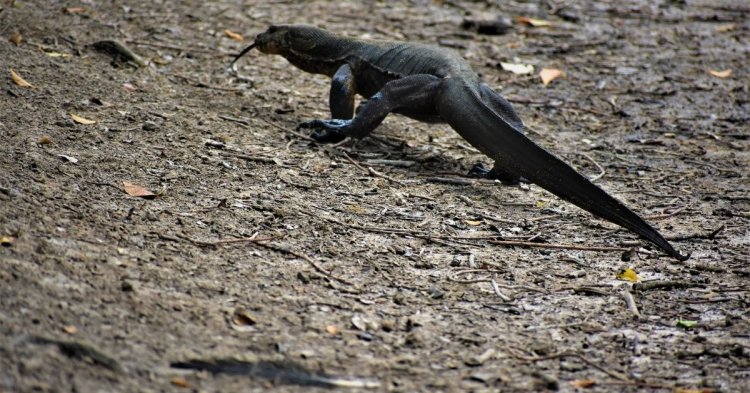 We reached the boat,by the time water level had receded than normal.We were able to sight a common sandpiper, Painted stork, Indian pond heron, little egrets on the islands.

As the boat moved past, the water level suddenly started rising. I spotted a Monitor lizard. a huge one as if gliding on land.A huge Esturian Crocodile about 16 feet in length lazily resting, basking in the sunlight amid mangroves, displaying its teeth.Watching our movements, posing in grace !.

Our boatmen slowed the boat , i was eager to capture it full through my lens.It didnot make a move or blink its eye.Finally the salty  posed for me.Our boat moved forward through currents. The reptile, knew our movements.I finally felt that we are in its territory, Bhitarkanika - Where salties rest in Peace !

I didnot want to disturb their privacy. I was convinced.!.

I myself asked a question ? , like howmuch whorthwhile it is spending time in this haven and have a rendezvous with them !

As i took a oath, of visiting once again and spending more time in this virtual paradise !

The boat came to Halt !

Where to stay at Bhitarkanika National Park?

I definitely recommend Odisha government site, inside the core zone of national park, Only forest department takes booking, that also Online.services and hospitality for exploring the national park. 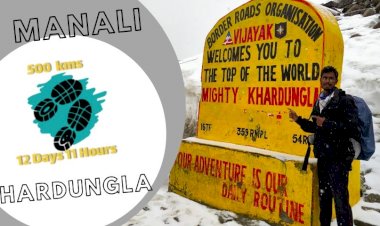 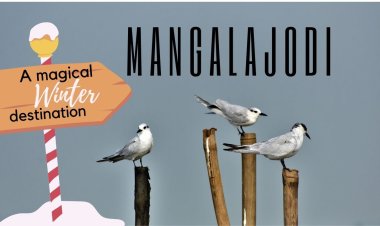 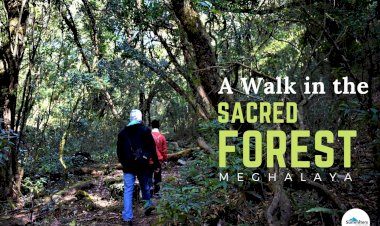 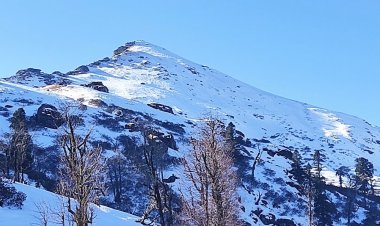 Khukuri is a knife, a weapon, and an Insignia of Nepal. Gurkhas sport this for pride... 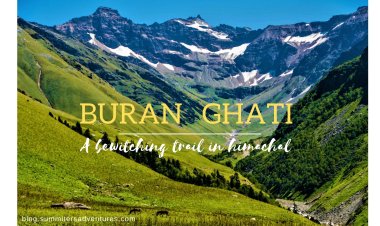 A high himalayan pass called Buran Ghati is a offbeat trek and arguably a bewitching...