We see Himalaya and what allures us the most are the ivory-colored peaks of it, the snow that glitters and attracts our eyes, but we don't, at first, realize that the snow must melt and when it does it creates water and so are the lakes created. The Indian state of Uttarakhand, home to some of the most beautiful peaks and massifs of Himalaya, also boasts some pristine blue colored lakes amongst the giants of Garhwal and Kumaon. It is not just the beauty or the colors or ensorcelling beauty of the surrounding of them, the stories and the folktales associated with these lakes also fascinates us and we in awe of it just can not say no to witness unfolding of magic. today we are going to talk about 7 alpines (high altitude) Himalayan lakes of Uttarakhand state. Not only the most famous but also most talked about the lake in the entire state of Uttarakhand, Roopkund is the must mention lake when talking about the lakes of not only Uttarakhand but also on Indian Himalaya as it has a great story associated with it. In summers when the lake is not frozen and the surroundings are devoid of snow, a cluster of human skeletons and bones can be found not only around the lake but also in the water of Roopkund.

At an astounding altitude of 4800 meters, Roopkund Lake lies in the shadows of Trishul Massif in the Chamoli district. It is one of the famous treks in Garhwal Himalaya, the trail to the lake passes through beautiful meadows of Ali and Bedni Bugyal, an annual festival is held at Bedni Bugyal. Roopkund lake is also known as The skeleton Lake, In 1942 human skeletons were discovered in Roopkund but it remained quite an unknown fact until recent times when due to mass tourism, the story of human skeletons found a place in pop culture and the story along with the lake was made famous.

How to reach Roopkund Lake - Lohajung is the starting point of Roopkund Lake trek. The trail passes through Ali and Bedni Bugyal. Satopanth literally translates to the way of truth, that is why Satopanth Lake is known as the lake in the way to truth. This one finds a special place in the Hindu mythological epic, Mahabharata, as the story goes, during the Swargarohan Pandavas passed through this lake and it was here at this lake where Bheema fell to his death. The triangular-shaped lake with emerald green water lake is very sacred and the devotees believe that on a particular day every year, Lord Brahma, Vishnu, and Shiva come down from their heavenly abode to take a holy dip in the water on Yogini Ekadashi in sacred Satopanth lake.

Situated at an altitude of 4600 meters, Satopanth tal is about 25 km beyond Badrinath Dham, one of the Char Dhams of India. To reach this sacred lake one goes through some of the most beautiful landscapes in Uttarakhand, be it the cascading waterfalls at Vasudhara fall and SahastraDhara or clusters of Rhododendron trees at Lakshmi Van or the glaciers of Alkapuri, Satopanth, and Dhanno.

How to reach Satopanth Tal - Trek to Satopanth starts from Badrinath Dham or Mana village. Nestled in the shadow of mighty mountains such as Mt Thalay Sagar, Mt Bhrigupanth, Mt Gangotri, Mt Manda Parbat, Kedar Tal is called as the lake of Lord Shiva. The feeding stream of Kedar Tal is Kedar Ganga, which according to mythology is Lord Shiva’s contribution to Ganga, is a tributary of Bhagirathi river which eventually merges into Alaknanda at Devprayag and becomes Holy Ganga. Passing through some of the most remote and secluded regions of Uttarakhand, the trail that goes to Kedar Tal is less about stories but so much about adventure.

The altitude of 4785 meters might not sound like something big but it is the location of the trek that makes it so enthralling. The very first must know a thing about Kedar Tal is that it is a glacial lake located right at the base of Mt Thalay Sagar and Mt Bhrigupanth. Camping at Kedar Tal, in the shadow of Thalay Sagar, is a once in a lifetime experience.

How to reach Kedar Tal - The trek to KedarTal starts from Gangotri. 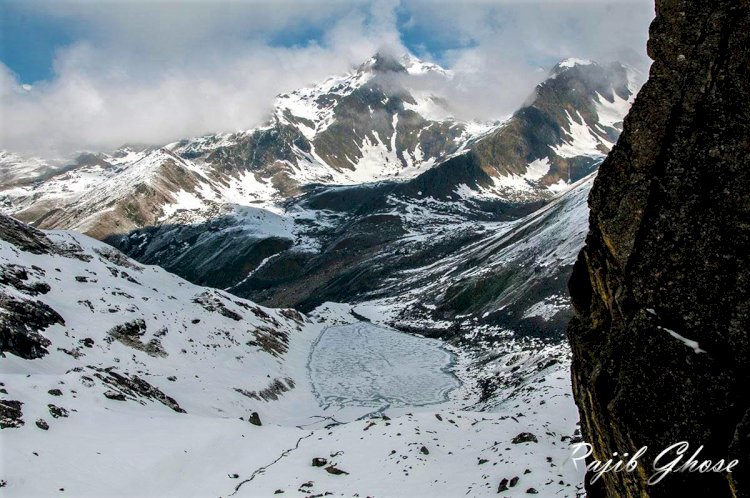 Vasuki Tal, located above the sacred pilgrim Kedarnath Dham, gets its name from the name of the serpent that coils around the neck of Lord Shiva because the shape of the lake resembles it. Myths also say that at the festival of Raksha Bandhan Lord Vishnu came in the realm of mortals. The lake is fed by the melting snow of the surrounding mountains, it is mainly fed by Chor Bamak and Vasuki glaciers. Vasuki Tal is the originating place of Vasuki Ganga. The lake remains frozen for most of the time, is devoid of any vegetation but Brahma Kamal, the state flower of Uttarakhand, can be found in the surroundings of the lake. About 8 km from Kedarnath Dham, Vasuki Tal is located at an elevation of 4,135 meters. One can see a panoramic view of peaks of Garhwal Himalaya such as Kedarnath, Shivling, Thalay Sagar, Meru, and Bhagirathi I, II, III. The lake is more frequented by devotees of Kedarnath Dham, rather than trekkers.

Best time to Visit Vasuki Tal - The best time to visit Kedar Tal is before and after the monsoon, advisable to avoid monsoon time.

How to reach Vasuki Tal - Gaurikund is the nearest road head from Vasuki Tal. If you have been thinking that all the mythological stories associated with those lakes are kinda unbelievable or unrealistic then brace yourself, the folktale that is associated with Kagbhusandi Tal might feel like absurdity unleashed. They say that when the time comes for crows they fly here to die, in search of salvation. Cocooned at the base of Hathi Parvat, the surroundings of Kagbhusandi Tal are laden with some of the most beautiful and rarest wild alpine flowers. At an altitude of 5230 meters if we look above the lake we can see two large rock formations which resemble the shapes of a crow and an eagle, and locals believe them to be the same, an eagle and a crow indulged in a deep conversation about the matters of universal importance. It is not only the stories of Kagbhusandi Tal that seem out worldly, the trail that leads to the lake, and the views on the trail and at the lake also seems like something that is not from this world. To witness what magic lies there, one must go and witness it for himself. 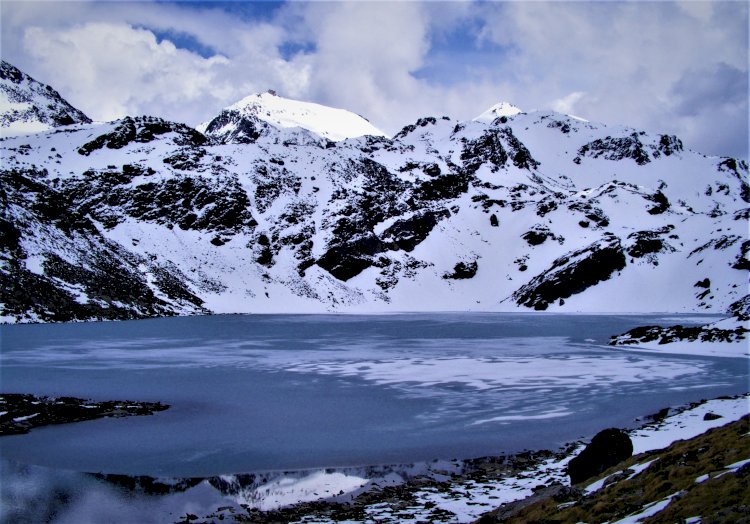 If other lakes and stories associated with them involved god and goddess, Maldaru Tal itself is considered a goddess in itself. There are several stone structures around the lake showing the significance of the lake for the locals. Located at an altitude of 4,500 meters Maldaru Tal is considered a goddess because once when the valley down below was hit with severe drought, the locals decided to pray to the goddess for the rains and the place for the prayer was Maldaru and when the prayers were answered, the locals started to host a religious gathering on the shores of the lake and the lake got itself a statue of the goddess.

How to Reach Maldaru Tal Lake - Maldaru Tal can be approached from Sankri village in the supin river valley. 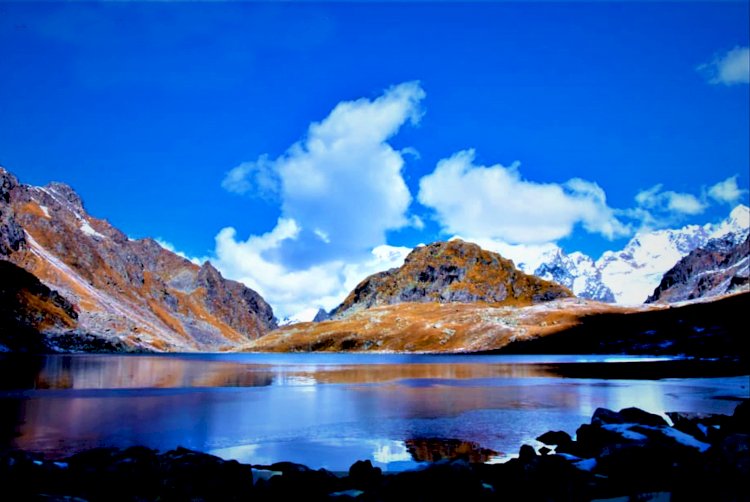 Nandi Kund Lake located at an altitude of 4805 meters, is the source of Madmaheshwar Ganga. Nandi Kund is about 2 kilometer from Kalpeshwar on Madmaheshwar Kalpeshwar trail. The famous Madmaheshwar temple, one of the Panch Kedar, where Lord Shiva is worshipped in the form of a naval shaped lingam falls on the trail that goes to Nandi Kund lake. With a surface area of over one and a half kilometer, the lake is surrounded by the Chowkhamba massif and its glaciers.

Locals folklore and the mythological mentions of this region tell us that Pandavas spent a good amount of time here, seeking the blessings of Lord Shiva after the massacre of Mahabharat war. The trail to Nandi Kund passes through some of the most remote and enthralling landscapes of Uttarakhand.

How to reach Nandi Kund - The distance between Rishikesh and Mansuna is approx 230 km. Uniana, which is 15kms from Mansuna is the road head for Nandi Kund.