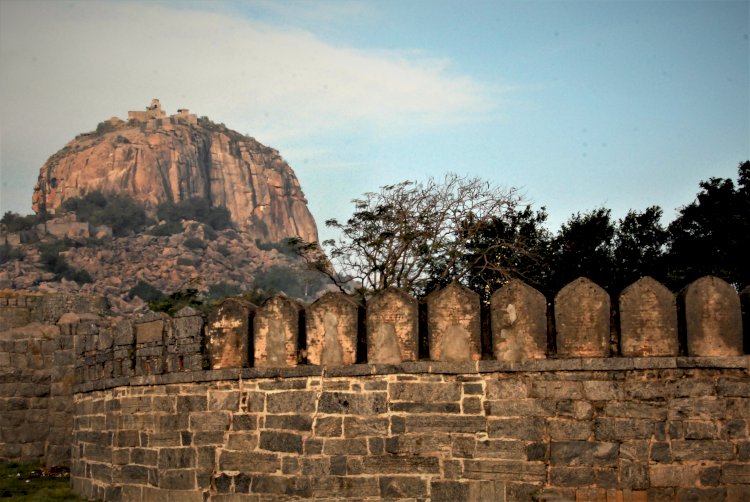 Leaving behind the bustling  temple town of  Tiruvannamalai I boarded the local bus to Gingee about 38  km away. The scorching heat of the sun had made me tired. I gulped the lukewarm water that I had brought  few minutes back.

In front of me stood Rajagiri, the most spectacular of the three boulder strewn hills of Chakkilidurg and Krishnagiri  within comprising the fort complex of Gingee – described as ‘ Troy of the East ‘ by Father Pimenta, a Portuguese Jeuit priest visiting in 1597.It is such a catchy epithet that when the opportunity came I was determined  and straightaway headed for the Gingee, unmindful of the scorching heat of summer.

Tthe beginnings of Gingee are steeped in mythology.According to a local legend, Seni Amman was one of the seven ,virgin guardian deities of the village and theplace derieves its name from her.Its fortifications date back to 12 AD and are credited to anand Kone , the chief of the local shepherd community.

Recorded history goes back to the 16 th century when Gingee became the seat of Nayaka rulers as a part of the vijayanagar Empire.Its first king Krishnappa Nayaka later became the founder of the Nayaka rulers of Gingee.Most of the fortifications, Structures  and temples were built during this period.Maratha  ruler  Shivaji,further strengthened its defensive system after capturing it in 1677.In 1691 it passed into Mughal  rule under Aurangazeb. Soon after, it became a part of the territory of the Nawab of Arcot. After their defeat by the French, Gingee remained briefly under the control before succumbing to the English in 1761. Built by the Chola kings in the 9th century, the fort fell into the hands of successive conquerors. Now, in the care of the Archaeological Survey of India

I was moved at  the strategic location of the fort rather than its architecture. I was standing at the main gateway of the fort  and felt excited that I would be visiting one of the most spectacular forts of India . I bought a ticket for Rs  5   and gained entry  into the fort Complex.

The entire fort complex was woven into by a single piece of  thick rampart and guarded by a moat 80 ft wide, where the wall cross the plains. The hills were strewn with boulders  and  rocks hanging onto each other precariously.

Starting with  Rajagiri  I climbed over the rough granite steps of the hill  which stands as tall as 800 feet, I walked past a ruined temple dedicated to Lord Shiva adjoining sprawling  Venkataramana temple with its striking sculptures and carved pillars lay nearby.  At the base of the citadel are hosts of constructions such as palaces, gymnasium  and Kalyana mahal or the Wind palace. The white pagoda-like spire of the Kalyana Mahal, thought to be the quarters of the queens, is stunning in its splendor. A Minar like structure with multi stories surrounded by large and spacious halls, that served as the resting halls of the soldiers and their horses. 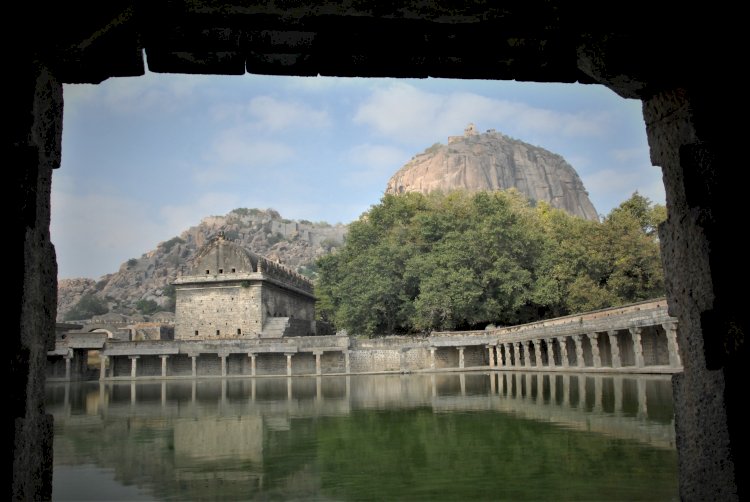 The sun shone with its angst along the steep gradient of the granite steps. I was amazed at the thought of the tenacity of the people, who cut these granite huge boulders, shaped it to steps and later lay them on this treacherous terrain.

Ranganatha Temple built on the top of the fort was another notable achievement. The temple has been built in the Vijayanagara style of architecture ; it is now desolate without any shrine or any worshipper. The temple must have been so famous and busy when the Hindu rulers were holding their sway.

All buildings on the top of the fort remained empty and desolate.They have become the abodes of bats which were busily flying here and there. The  strange stench caused by the movement of these bats and it makes you even more nostalgic about the past. There is also a mosque built in the memory of Sad-ud-ullahkhan, a muslim ruler of Gingee, in the outskirts of the Gingee Fort. I recalled few  sequences of the tamil  movies  picturerized  here

The history of the Gingee fort will not be complete without mentioning about Raja Tej Singh, who was considered as the best ruler of Gingee having his abode at Rajagiri.He had a very faithful muslim general.When Raja Tej Singh died, a funeral was performed within the premises of the fort and his wife is said to have committed Sati on the funeral pyre .The place where Raja Tej Singh's funeral was performed and his wife committed Sati can also been within the fort of Gingee.Adjacent to it, in a open area is a small shrine dedicated to Kamalakkini Amman, the only temple in gingee, which is  still active.It  has a sacrificial altar  and murals dating back to the  Nayaka period. I washed my face in a nearby waterhole and appeased my thirst.

A little climb later I came across a wooden bridge that connects the citadel with the hill, which if lifted up, no one would be able to reach Rajagiri as a 20 m deep chasm separates Rajagiri  making it almost impregnable.Rajagiri like the other two hills has been planned to withstand long seizes.It’s inexhaustible supply of water from cool natural spring , two massive granaries , treasury and watch tower made it quite self sufficient.To the south of the watch tower is  a  canon 4 m long  with a circumference of 2 m pointing towards plains. 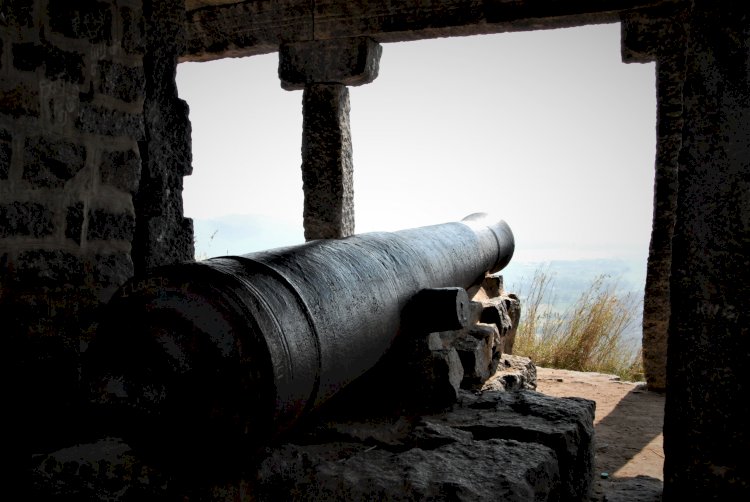 The cool breeze on the hot day  was exhilarating !. From here  view  twin hillforts  of Krishnagiri – Chakkalidurg seemed like  tiny hillocks dotting the landscape. I was spellbound by the view of cultivated fields and Muthukadu forest reserve. Leaning against the forest wall I thought that my visit  was worthwhile!

Despite all odds that the fort faced.It still stands silent and strong as a mute witness to history!

A day visit to Chidambaram and Exploring the Mangroves...