located high in the Western region of Himalaya, India's Valley of Flowers National Park is renowned for its alpine meadows of endemic alpine flowers and outstanding natural beauty. Every year about 520 species of flowers bloom in the valley. Every day the whole valley is in a riot of colors. Indeed !. Trek is ideal for families, Nature lovers, and Botanists. 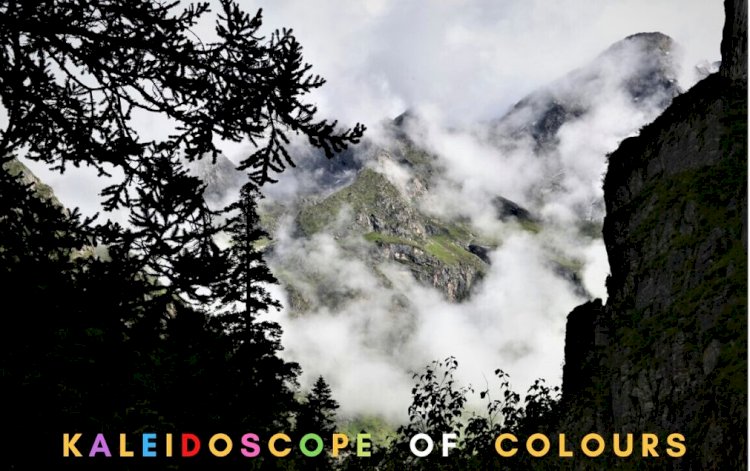 Leaving behind  our heavy rucksacks at Govind ghat ( Uttarakhand ) the starting point of our journey towards the  Valley of Flowers, we headed towards  Ghangaria, 14 km away. The zig-zag path rose gradually, beyond the Alakananda.There were many sikh pilgrims on the way trekking up to hemkund Sahib, one of their important pilgrim centers. Hordes of Ponies carrying pilgrims clambered up and down the narrow path. Amidst this floating pilgrims, the swift-flowing Laxman Ganga was rushing down to embrace the Alaknanda below. 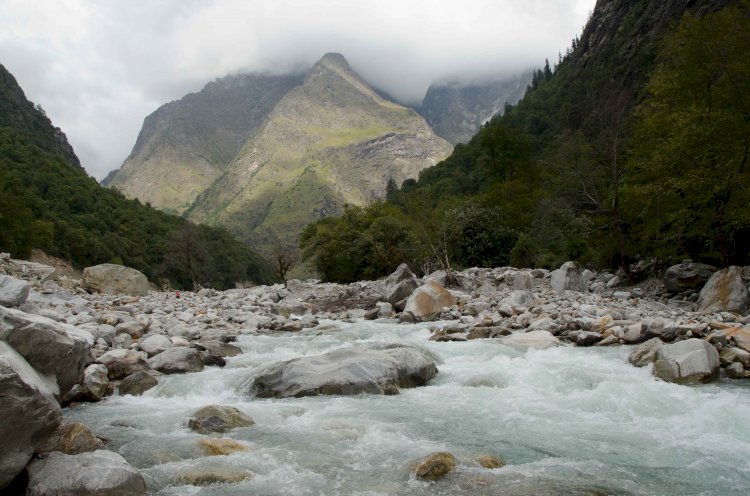 We passed through the village of Pulna and after trekking for 11 km reached the little village of Bhyunder. Here we were greeted by the towering  Hathi Parvat  ( 20, 200 ft )  which looked like a White Elephant in the sky. Resting here for a while, we learnt more about the village. 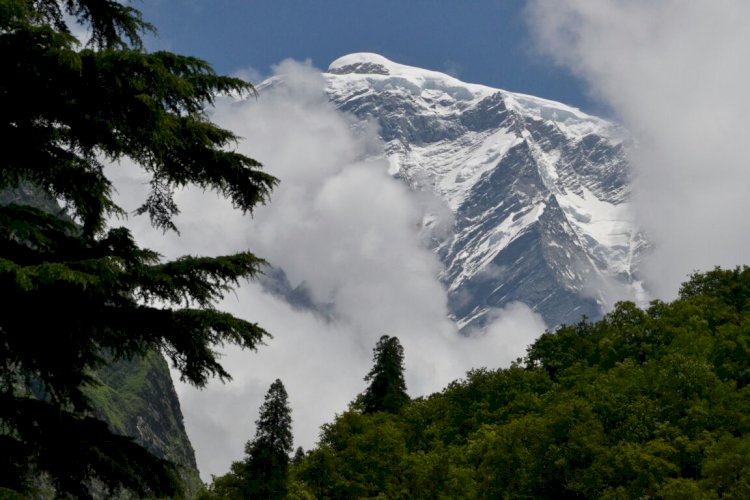 Bhuyunderis  simple-looking rustic people, claim to be descendants of Prithviraj Chauhan , the last King of Delhi , who migrated to this village.During the month of August they celebrate with great fanfare the festival of Nanda Ashtami, symbolizing the home coming of goddess Nandadevi, the source of cosmic energy.A day prior to the festival , villagers go to the valley to locate a Brahma Kamal  with a bee hovering it constantly , believed to have been received by the deity.This flower, along with many other flowers is carefully brought to decorate the deity and then the whole village begins the festivities with singing and dancing.

We continued to march ahead from here and the path became steeper. However the abundance of shops all along the way and numerous pilgrims chanting wahu guru and bole so nihal   in the praise of the Lord made the going less tiring. And one could always relax stopping for a while and feast on the breathtaking beauty of snow-clad mountains  and a distant waterfall or take a view of the gurgling stream rolling down below. Trudging up slowly we reached Gangharia in the evening. A small village with few hotels and rest houses , this place was also a  logical base camp for Valley of Flowers  and Hemkund Sahib. The Gurudwara here is of  great help, with its service of  free food and Accommodation to the pilgrims irrespective of their religion.

We resumed our trek quite early the next day.The Laxan Ganga from Hemkund and the Pushpavati river from Valley of flowers  meet here and flow further down as Bhuyundar Ganga. After  crossing it over a log bridge , river Laxman Ganga  3 km from Gangharia, and the path  diverges , one is going to the spectacular  Valley of Flowers  and the other to the Holy Lake. We chose the latter, thinking of making a  quick ascent of Hemkund .Tracing our way through the stony pathways and steep shortcuts reaching to the sky , we reached Hemkund  6 km after  a  3 hour stenuous climbing. From there the view was  aweinspiring. The deep valley and the river  , which we had left behind were far down  below. With inspiring snow clad Neelkanth Peak = Jewel of Gharwal soaring high above in the distance. Situated at an altitude of 15,200 ft Hemkund sahib  Gurudwara is located beside a lake surrounded by Mountains.Legend has it that  according to Guru Granth Sahib , the holy scripture of the Sikhs , Sant Guru Govind Singh in his previous life meditated  for 300 years  beside a lake surrounded  by seven peaks – Saptha Shrung

Effort were made to trace this lake and it was only in 1932  that Havildar Sohan  Singh located this lake.It is now named as Lokpal Lake. In the later years this came to be known as Hemkund Sahib and the most revered shrine for the sikh Community.

We made our way towards the crystal clear holy lake surrounded by  the beautiful  Brahmakamal  . It seemed as if the mountains were rising out of the merald waters , the mist created  an illusion of a constant sway of the mountains  as if they were gently moving  in tune to the chants of the Piligrims. We left after having a dip  in the freezing water followed by a prayer at the Gurudwara. In about  less than  2 hours we had reached the path to the Valley of Flowers , four km  away. After  a quick lunch at the tea shop we started off on our  onward journey immediately. Crossing the wooden bridge  on Pushpavati   river  from Tipra Galcier ,we kept going up  on the steep path. 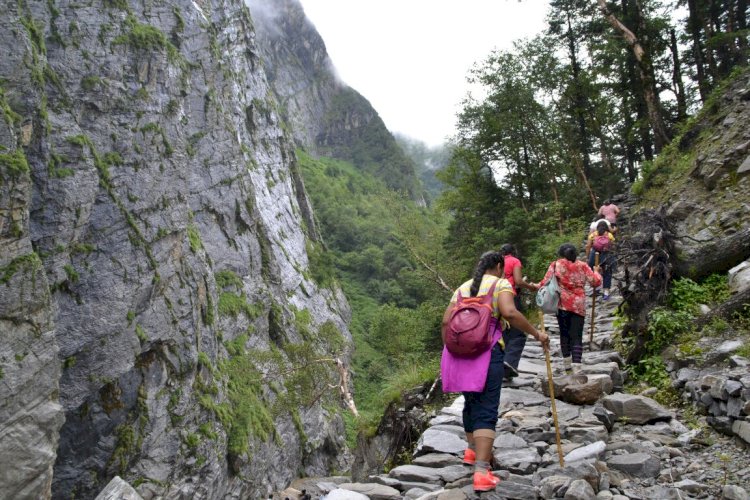 The sun was birght but the path was shaded. The gengle cool breeze  was exhilirating .With only the Mountains , alpine forests  and the river in the surroundlings.I felt that there was no place that offered peace and trannquility so profoundly and so abundantly.

Though the valley of flowers was declared a  National Park in 1982 its recent historical reference to   Valley of Flowers dates back to the year 1862 when colonel Edmund Smith an educational officer in the army, chanced upon this Valley in the vicinity of Nandan Canyon while crossing Laxman Pass ( 16,688 ft ) . Fascinated by the abundance of flowers, he wrote a book on the flowers of the Valley. In 1907  Dr. Tom Longstaff a Mountaineer after successfully summiting Trishul  Peak 21,000 ft chanced upon this place. In 1931, having lost his way while returning from a successful expedition to Mount Kamet 25 447 ft a British Mountaineer, Frank  Smith reached this valley. He was overwhelmed by the enchanting beauty. The whole valley was a Kaleidoscope of colors with myriad flowers, yellow, red, white, purple and of various of other hues and shapes.He kept visiting the valley frequently and authored a book called  The Valley of Flowers. It is true that local settlers had seen the Valley earlier but heir strong belief that the land belonged to the fairies and nymphs prevented them from trespassing the celestial abode.

Even though the Valley of Flowers  National Park starts from  Gangharia, we enter the main after crossing the gorge at Narparvat about 3 km from Ghangaria. In front of the Valley seats the snow-clad peak of Rataban 18.384 ft and at the back is the Kuntkal 14,000 ft towards the left is Nar Parvat  16500 ft and this separates Badrinath from this Valley.The Pushpavati river emerging from the glacial deposits around Rataban nad Nilgiri Parvat 19440 ft ranges cuts through the valley enhancing the beauty  of the Valley. To  the right of the Valley is the forest full of birch trees, bhoj patra whose bark was supposedly used  to write scriptures in ancient times.

We were really mesmerized as we roamed through this valley  9 km long and about 2 km wide.We found ourselves in a natural garden of brightly colored and beautiful flowers. It was a real treat to the eyes. 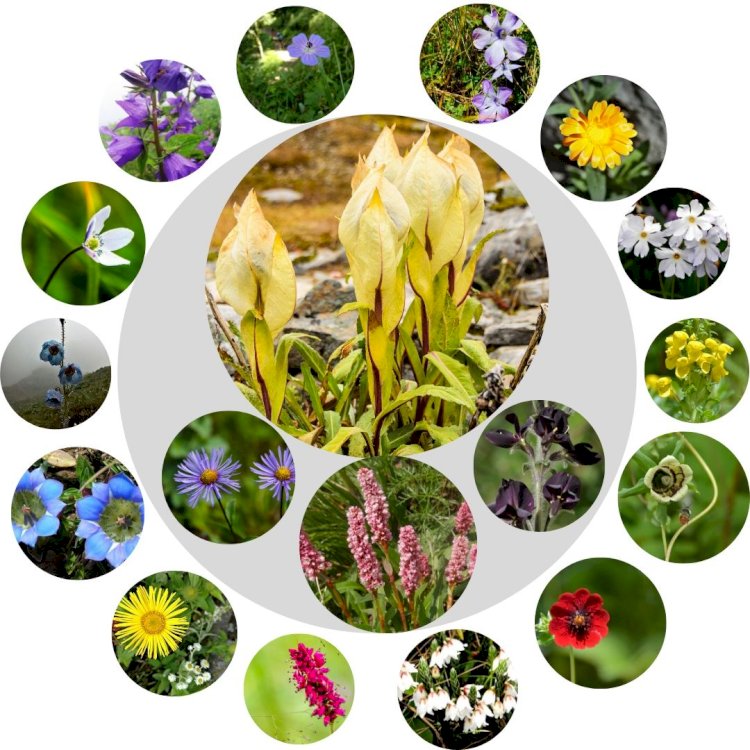 Even though there are more than 300  different species identified flora, some of the commonly found varieties having tremendous medicinal values are the violet colored  Erigerons, Himalayan blue poppy, Geranium, Delphinium, Anemones, Primulas, Potentilla, Campanullas, Morina Longifora, , Polygonum and golden fern grow so profusely as to pose a  danger to the survival of other species. One can find here some nonflowering herbal plants and orchids as well.

Apart from the flowering plants, animals such as the tailless mouse, musk deer, Bharal, Blue Sheep, and Himalayan bear are also found here.

All along we had no sense of the passing time as we had lost ourselves in the heavenly valley. However, we realized it was time to get back and towards late evening we left the enchanting valley behind reluctantly.