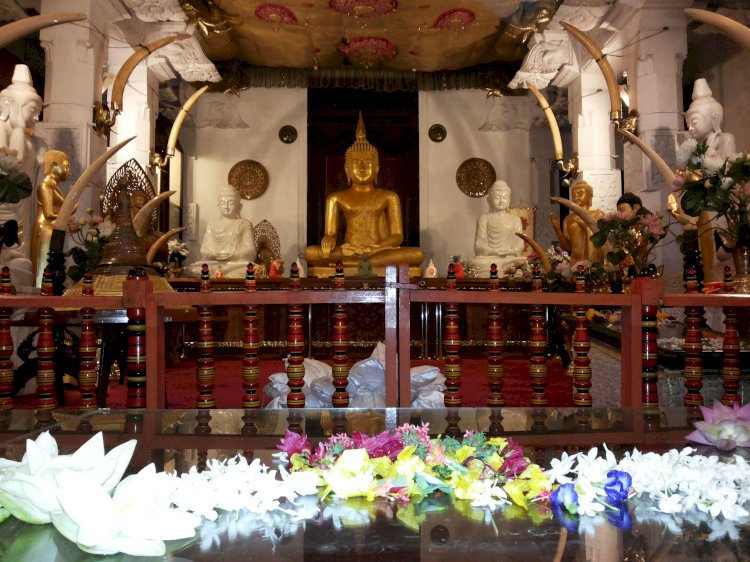 Golden idol of Lord Buddha at Temple of Tooth - Kandy

We had spent a week long exploring pristine beaches, diving in azure waters, wildlife sanctuaries, visiting temples and historical monuments. Our holiday in Srilanka seemed almost to have come to an end and we were in Kandy finally. Lastly the tour Itinerary revealed that visit to Temple of Tooth was must.Walking past on the left bank of the Kandy lake we reached a enclosure. A white fort like structure drew our attention in no while we were at the gateway.

The stunning 17th-century Temple of the Tooth Popularly known as Sri Dalada Maligawa is believed to house the left upper canine tooth of the Lord Buddha himself. This precious relic attracts white-clad pilgrims, bearing lotus blossoms and frangipani, every day. According to legend, the tooth was taken from the Buddha as he lay on his funeral pyre. It was smuggled to Anuradhpura in Sri Lanka in 313 AD, hidden in the hair of Princess Hemamali who fled the Hindu armies besieging her father Guhasaiva’s kingdom in India. It immediately became an object of great reverence and was enshrined in a series of nested jeweled reliquaries. The tooth was brought out for special occasions and paraded on the backs of elephants, which are sacred to the Buddha. where it survived numerous attempts to capture and destroy it.

When the capital was moved to Kandy, the tooth was taken to the new city and placed in temples built to honor it. The temple was originally built under Kandyan kings between 1687 and 1707, but later severely damaged during the 18th-century colonial wars against the Portugese and Dutch. After the wars, the original wooden structures were restored in stone.In January 1998 Hindu Tamil separatists bombed the temple, damaging its facade and roof. Restoration began immediately afterward.On the outside, the temple buildings are not magnificent or elaborately decorated. White with red roofs, they cluster around Kandy Lake (the island in the middle once housed the king's harem).In striking contrast to the plain exterior, the interiors of the temple buildings are richly carved and decorated with inlaid woods, ivory, and lacquer.

Around the entire complex is a low white stone wall, delicately and simply carved with openings that give a filigree effect. During celebrations, candles are placed in the openings, lighting up the entire front.

The relic of the tooth is kept in a two-story inner shrine fronted by two large elephant tusks. The relic rests on a solid gold lotus flower, encased in jeweled caskets that sit on a throne.The temple is joined to the Pattiripuwa Octagonal tower, built in 1803, that was originally a prison but now houses a collection of palm-leaf manuscripts. The king's palace is also in the temple compound.The tooth relic is removed from its shrine only once a year, during the Esala Perahera, a 10-day torchlight parade of dancers and drummers, dignitaries, and ornately decorated elephants. It is now one of the better-known festivals in Asia, and it may be the largest Buddhist celebration in the world. This ritual procession and festival began in the 18th century. During the full moon in late July or early August, a royal male elephant carries the reliquary of the sacred tooth and leads the procession, flanked by two perfectly matched, smaller elephants.

Unfortunately, due to tensions with the insurgent Tamil Tigers and corresponding worries about it being damaged or stolen, the relic itself has not been brought out during the festival since 1990. In the meantime, the casket is honored as its representative.

As many as 100 elephants, dressed in elaborate finery, make their way into town while torches and fire dancers fend off curses. Whip-cracking porters clear the way through the throngs of pilgrims, followed by musicians, jugglers, torch bearers, boy dancers and acrobats, and members of noble families in Ceylonese garb.

On the last night, the procession moves from the city to the temple, led by elders in the costumes of the ancient kings of Kandy and lit by handheld candles. The procession flows into the temple compound to encircle the shrine, following the route of the sun in its course across the skies.

Attendance at the Esala Perahera numbers at about a million people. The festival brings today all ranks of Sri Lankan society in a vast throng of devotees and interested onlookers. Because of the national character of the shrine, Hindus and  Christians too take part as an expression of their common cultural heritage.

Withstanding all damages, today Temple of Tooth stands as a Sentinal and symbol of faith thus spreading the message of Buddha.