A Weekend trip to Kollur and Kodachadri in Udupi can be a beautiful combination of religious fervor and trekking. Kollur is a small dreamy town about 510 km from Bangalore.It is one of the seven Pilgrimage centers created by sage  Parashurama, best known for the famous Mookambika temple built in the early 15 century AD.

Numerous fascinating Mythological legends abound to explain the wonder and beauty of this blessed place. Its Original name was Maharanyapura or Kholapura, as mentioned in the Skanda Purana and Bhairavapurana. One of them goes like this - A Sage by name Khola Maharshi who lived in Maharanyapura pleased Lord Shiva with his devotion and penance. The Lord appeared before him and told him that the place would be named after him and also directed the Rishi to worship a linga in Maharanpura because Devi Parvathi would appear in it and it would become sacred. hence the name Kholapura which later came to be known as Kollur.

Around this time, as mentioned in the Padma Purana, demon Mahishasura performed rigorous penance and obtained a boon from Lord Brahma that no mortal would be able to kill him. With this boon in hand, the demon seemed almost invincible and troublesome to Gods, sought the help of Trimurthis for his destruction. The tri who took the form of Devi Chamundeshwari killed the demon and settled in the town to protect its people. The Goddess then transformed herself into the divine light and merged with the linga. Thus it is known as Jyothirlinga and is considered as sacred as Shivalinga at Gokarna and Murudeshwara.A golden line called Swarna Rekha divides this linga into two equal parts and is visible only when the sunlight reflects on the linga. The right portion of this linga is said to represent Brahma, Vishnu, and Shiva as the conscious static principles and the left part Mahalakshmi, Parvathi and Saraswathi the creative energy principles. 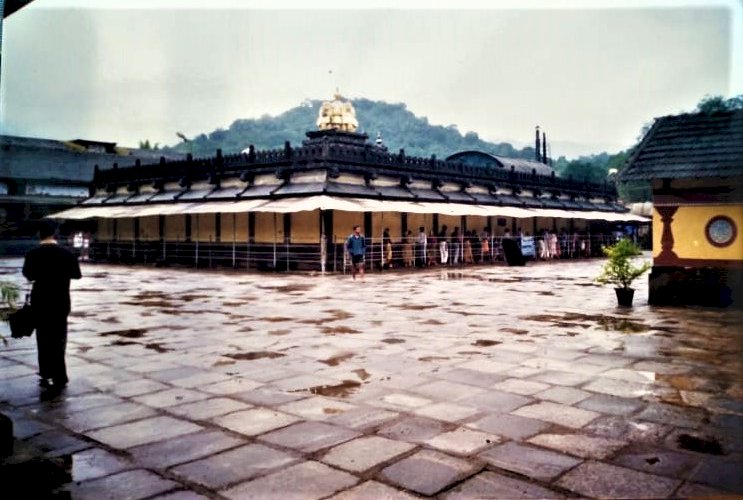 The legend of Mookambika which revolves around one more demon is equally interesting. Kamasura,  who was conferred with the same boon as Mahishasura was terrorizing Kholapura. The people of Kholapura requested Devi Parvathi to save them. In the meanwhile, kamasura praying Lord Shiva to redeem him. But when Shiva appeared before the demon to grant him a boon Kamasura was suddenly struck dumb and was unable to ask him for a boon. Thus Mookmabika means the Devi who can strike you dumb Ultimately. the Devi assumed a ferocious-looking form with eight arms wielding the deadly weapon Trishoola . A fierce fight ensued between the duo.she slew Mookasura at a place called Maaranakatte. Just as he was about to die he repented and prayed to Devi who took pity on him and granted him moksha.

Later in the 8 the Century the great religious leader Adi Shankaracharya. knowing the sanctity of Kollur. undertook a penance atop Kodachadri peak and installed the panchaloha idol of Goddess Parashakti inside the temple behind the Jyothirlinga. The Mookmabika temple with its copper roofs and goldplated crest in the base of the lofty green mountain with small streams Sowparnika and Agnithirtha flowing beside really makes for a spectacular sight.

Moving about 2 km from the hustle and bustle of this temple town is a Wildlife sanctuary called Mookambika Abhayaranya spread over an area of 247 sq km. This Sanctuary is home to barking deer .sloth bear, tiger, leopard, wild dog, bison, jackals, languages, and innumerable species of birds and reptiles.

For those hardy souls who would like to savor the bounty of nature in a cool place, a trek to picturesque Waterfalls Arishinagundi and Hidlumane tucked away snugly at the base of Kodachadri inside the Mookambika Sanctuary is recommended. From the Hidlumane Waterfalls, a steep uphill climb and after a good 9 km steep uphill climb through the leech-infested strip of forest, wading through thick elephant grass ( aane hullu ) which reach up to knees, one can reach Kodachadri. 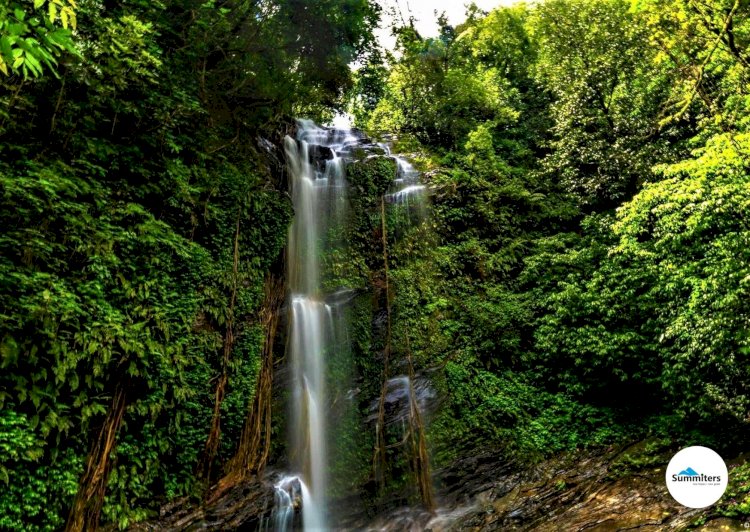 One can hire a jeep from foothills to reach the top of the peak Via Kattinahole. It is a picturesque journey with thick forests lining the highway. If one really wants to trek it up, get off the bus at Kareghatta,w which is 13 km from Kollur on the Shimoga - Kollur road. 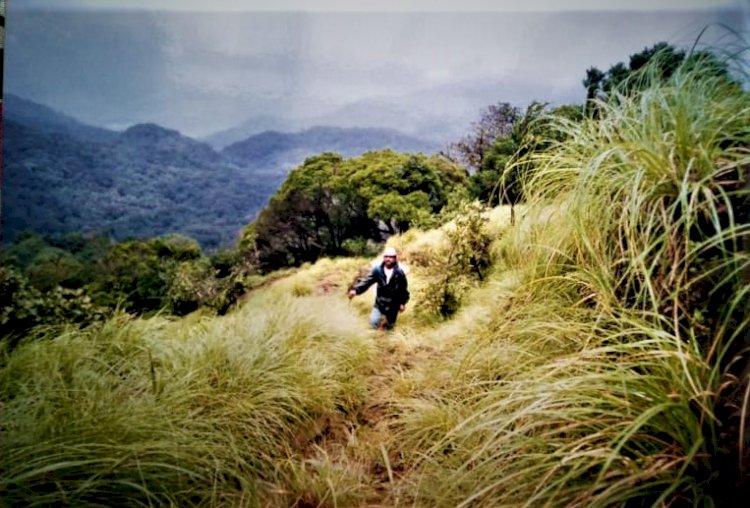 There is a small temple complex of kalabahairava, Umamaheshwara, and Parvatheeshwara known as Mookambika Moola Devi Khestra.In front of the temple is a trishoola which is half embedded in the ground. This is believed to be the trishoola that Devi used to slay the demon.It still gleams in the sunlight and has not rusted after all these years.

Bound by tradition this place is flocked by devotees from nearby villages and an annual fair takes place during the Mahashivarathri and Navarathri festivals. The priests of this temple are rather practical and enterprising. A part of their house has been converted into a dining hall where pilgrims and trekkers are provided food at a nominal cost. They also allow sleeping in the verandah for the night.

From here, after an hour of an uphill climb, one can reach the Sarvaghna Peeta, the summit of Kodachadri. A small mantap marks the seat where Adi Shankara is said to have attained divine knowledge and is said to have spontaneously composed the classical work Soundarya Lahari here. 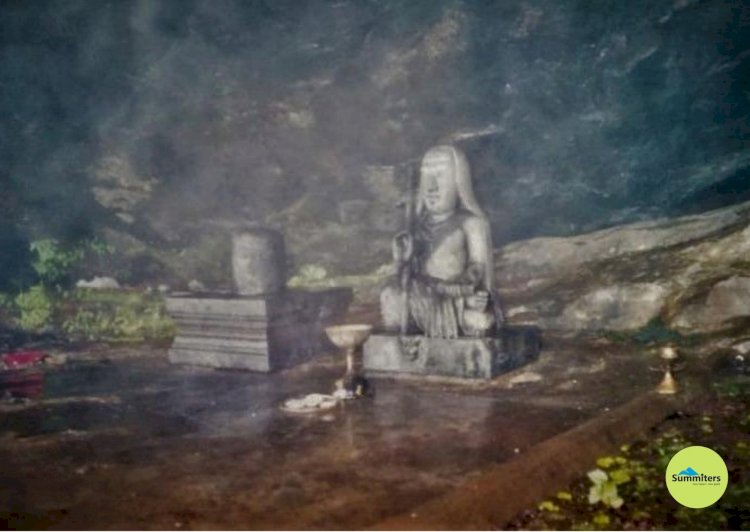 The view of the Western Ghats from here is breathtaking. If the skies are clear, which is not most of the time, the distant Arabian  Sea is also visible. The overlooking green valley offers a panoramic view of the Sharavathi river flowing like a silver stream in the valley. From the peak, steep descent to the left in the thick bushes leads to a cave cut into the cliff face. This is Chitramoola where Adi Shankara is said to have sat in penance. A Perennial sweet water spring that flows here is said to be the origin of the Sowparnika river. The sight of this unconventional cave located in the wilderness shrouded with mist makes every step to Kodachadri Worthwhile. !

How to Get There