Kashmir is known for scenic beauty, has so much to offer for a traveler. The delectable food here is something to be savored and experienced. The culinary skills and dishes made of Nadru is something one should taste, to get the real essence of this Eden 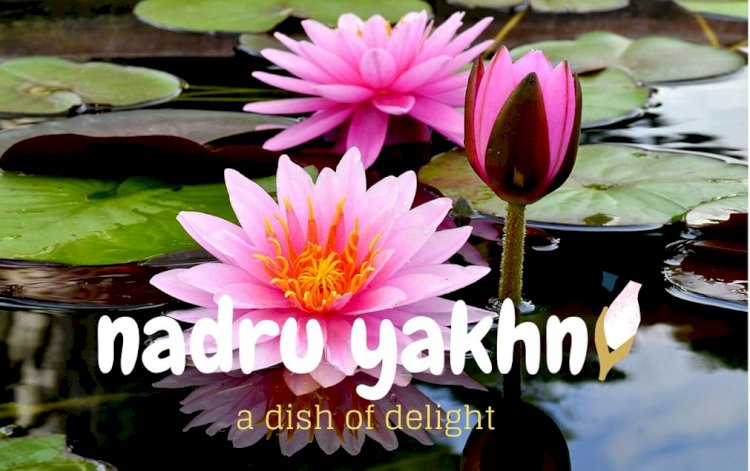 We had successfully completed Great lakes trek of Kashmir and had reached Srinagar afternoon. My friend Shaqoor had invited us for lunch and was our host, the other trek mates were craving and also eager to taste some homely food after a long time. After sharing the weeklong trek experiences, breathtaking beauty of Kashmir, and its azure lakes, lunch was served early as all were very hungry.

In one of the dishes prepared, a crunchy dish tasted well for my taste buds, and being foody or food-savvy I went for more servings. When curiously enquired Shaqoor about it, he told it is neither a vegetable nor fruit. Being a staunch vegetarian,  myself, including others were a bit apprehensive and inquisitive to know what exactly it is. Finally, the cat was out of the bag, Shaqoor's mother who had cooked for us specially said that it was nadru yakhni, the name sounded like some Spanish dish!

Shaqoor had asked to cook this dish and began to talk about Lotus. It is not just our national flower, for no reason lotus has much more to offer than just its natural beauty. The stunning flower, which is an aquatic plant of the Nelumbonaceae family, has been brought to culinary use in various ways; not just the flower, but its roots, stem, and seeds known as Makhna entire plant are used in various delicacies, has its unique and amazing health benefits too.

Coming to lotus roots, it is more commonly known as kamal kakri in India, Lotus stems are called nadru in Kashmir. and is a woody, edible root that can grow as long as four feet in length. Edible lotus root is known for its crunchy texture and slightly sweet taste. It is a versatile vegetable and food connoisseurs across the world affirm for this vegetable that it can be steamed, deep-fried, braised or stir-fried, making it a relishing ingredient. However, more than its delectable flavor, it is packed with an array of powerful nutrients that promote health he added

According to Nutritionists Kamal kakdi is rich in dietary fiber, potassium, iron, and vitamins B and C. Considering they have these important nutrients and minerals, lotus roots can be called one of the healthiest foods. This help the body in the production of red blood cells.

Kamal kakdi is a storehouse of medicinal properties that has high amounts of dietary fiber, which helps to boost digestion. strengthening the respiratory system of a human body, which ultimately helps a person fight a number of diseases. It aids constipation, stomach disorders and smooth bowel movement. The presence of significant levels of potassium in lotus roots ensures a balance between fluids in the body and prevents excessive sodium from affecting the bloodstream. It relaxes the blood vessels and further prevents contraction and rigidity, thus increasing blood circulation. The iron present in the lotus roots also helps in smooth blood circulation.

Because of its innumerable health benefits, lotus stem recipes are still a delicacy for many households and Kashmiri pandits here. It helps reduce Stress, Is good for nourishing skin and hair. The presence of vitamins B and C in lotus roots helps in getting the perfect glow on your skin and smooth hair. Vitamin C boosts the immunity of a person and fights viral infections, stimulates collagen production in the body that is responsible for the skin's firmness. I felt that because of this kind of simple and hygienic food, practices  Kashmiris are fair!

Its constant usage helps in  Weight reduction, not only does it have lesser calories, but is power-packed with dietary fiber that keeps you fully energetic and power-packed for a whole day long. By devouring it you are less hungry throughout the day and hence, cut down on eating fatty foods. Also, it helps stimulate your digestive system, which also helps in inducing weight loss It prevents water retention because of the presence of excess potassium content in lotus roots, it absorbs the excess sodium and increases the production of urine. Thus, the roots help in preventing excess water retention.

While there are no hazards or risks in consuming lotus roots or kamal kakdi, it is advisable to eat them cooked, whether it is steamed, fried, or boiled. Lotus stem has lots of dirt inside and it needs to be cleaned properly. Normally it is cut in the ends from both sides and then peel the stem. Then cut it into thin slices using a sharp knife, later soaking the cut pieces in water for few minutes and then used. It is not advisable to eat raw roots as it may increase the chance of bacterial infections. Therefore, always wash them properly and cook them well before consuming them.

This root is used as a vegetable in Kashmir and extensively in Chinese and Japanese daily food. The edible parts of the lotus flower which is fo fresh underwater are usually crunchy, are fairly sweet, and have a flavor like a water chestnut.

Nadru Yakhni - Lotus stems cooked with mild aromatic spices and yogurt. Nadu Yakhni is a very popular recipe for Kashmir. It is a very traditional recipe of the Kashmiri Pandit community. Nadru yakhni is a very simple curry made with flavourful spices and fresh yogurt.

We appeased our hunger and learned so much about  Lotus by a delectable dish like Nadru Yakhni - It was really food for thought! We heartfully thanked Shaqoor for, great hospitality and left for Shikara ride at popular Dal Lake which was just 8 km from there. On one corner of the lake it was bustling with activity, we could see, locals studded in local attire, manoeuvering boats,  busy selling fresh flowers, and vegetables. It was nothing but a floating market, which reminded me of my floating market visit during the Bangkok tour of yesteryears. I could see, nadru bundled and stacked amidst other vegetables. 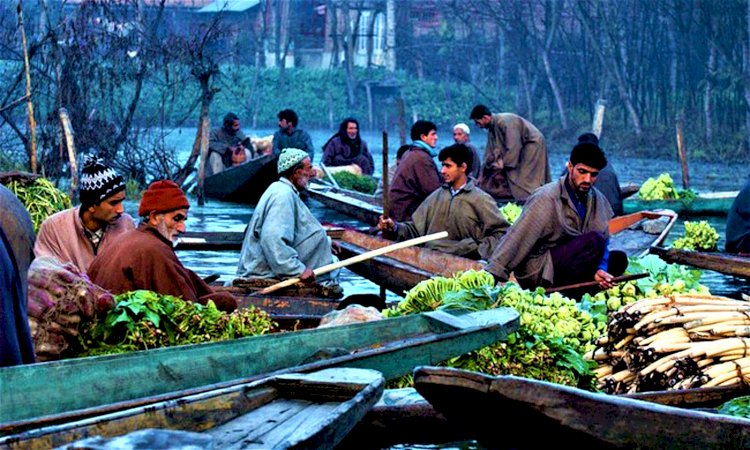 As the boat moved forward towards the bank, I could spot a bunch of lotus flowers in full bloom, glowing in sun. As a lotus flower is born in water, grows in water and rises out of the water, and through sunlight, it blooms, to stand above it unsoiled on its stalk, unsoiled by the mud and water, lives grandiose, finally conveys a message of a meaningful life and makes a difference.!

“The best way to find yourself is to lose yourself in the service of others.”