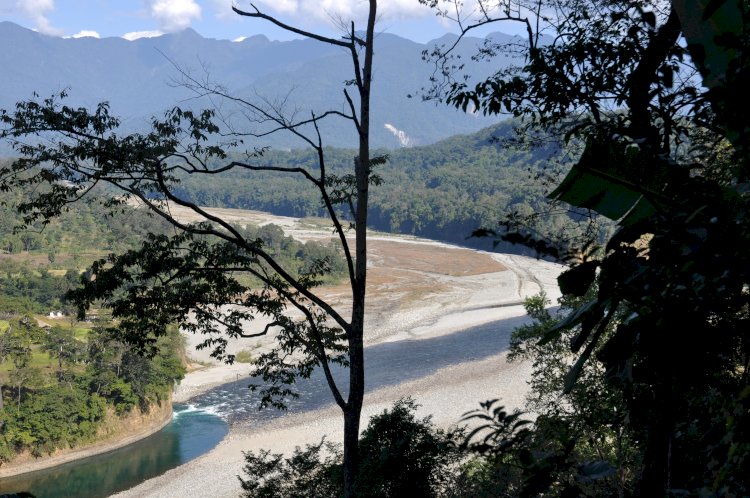 The dense fog had delayed my flight and a sudden bandh in Assam threatened to disrupt my itinerary. I landed in Dibrugarh, then freshened up at a friend’s place at Mohanbari and collected the inner line permit required for the trek.

After parathas for breakfast at a roadside Dhaba, I  passed through Tinsukia, Digboi, Ledo, and Margherita. We crossed the Assam border at Namchik and reached Miao- the taluk headquarters of the Changlang District of Arunachal Pradesh. This North-Eastern state was going to be my home for the Namdapha trek.

I got the restricted area permit from the forest authorities and then had a three-hour drive on a narrow slushy road before reaching my final destination- Namdapa National Park. By the time I reached the Deban camp it was already dark. After having a quick dinner I spent the first night in the forest guest house. 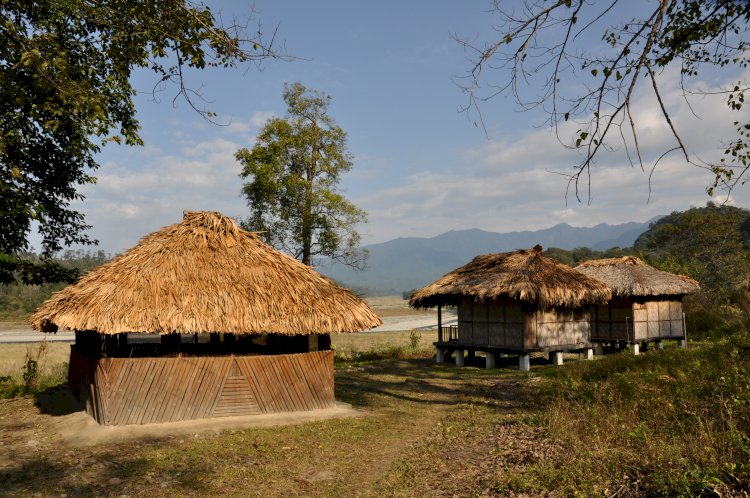 Namdapha National Park is the largest protected area in India and is a rich biodiversity hotspot in the Eastern Himalayas. It was declared a Project Tiger Reserve in 1983 and spans an area of 1985 sq km. The park is located between the snow-clad Dapha Bum range of the Mishmi Hills and the Patkai hill range with a wide altitude range between 200m and 4571m above sea level.

Abundant in flora and fauna

The park is home to about 96 species of Mammals. These include four big cats- namely the snow leopard, clouded leopard, common leopard and the tiger.

Abundant in birdlife, the park has about 453 species which include rare members like Fulvettas, Amur falcons, Green Cochoas and white-tailed fishing eagles. 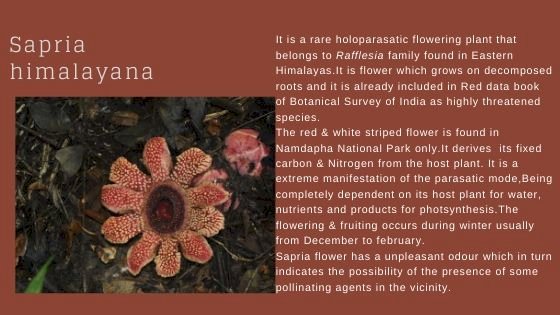 The next morning we woke up to the howling of hoolock gibbons. Our guide Bansa was ready with morning tea. After a quick run through about our trek route in the buffer zone area and an early breakfast, I set out with a backpack and two porters.

I crossed the fast flowing Noa Dihing River by ferry and continued our walk uphill. After crossing the Deban stream I reached a mark called zero point. Here I wore leech guards as per Bansa’s advice as we were entering a rich evergreen rainforest infested with numerous blood-sucking leeches. The ground here was dark and cool. It seemed the sunrays were making furious attempts to kiss the foliage on the ground. I was walking under a thick canopy of trees shooting up to a height of about 200-300 ft. I could see the Myristica fruits, nuts, wildflowers, and other varieties of foliage fallen on the ground. I could spot green birds like the drongo, spotted dove, jungle fowl, snowy throated babbler, blue napped pitta, and pale headed woodpecker. High above us were the great hornbills making roosting calls and flying between trees tops.

I passed through a large clearing in the forest called Haldibari and about a three-hour trek from there took us to the Hornbill camp, which we reached in the evening.

Since hornbill camp is situated in the midst of the towering evergreen forest, it was almost dark at 4 pm. Hornbill camp is called as it is one of the few places in Namdapa where one can see four hornbill species – the great hornbill, white-throated brown hornbill, rufous necked hornbill, and the wreathed hornbill. Other birds like white-tailed flycatchers, pied falconets, large scimitars, streaked wren babblers, and nuthatches are also in plenty.

Porters prepared hot soup followed by an early dinner and we slipped into our sleeping bags. Even from our tents, we were able to see nocturnal animals like the Malayan giant squirrel and the Flying squirrel jumping from tree to tree in the pitch dark.

On the second morning of our trek, I woke up to the usual live orchestra of great barbets, sultan tits, bulbuls, sunbirds, doves, and gibbons. We were attracted by few butterflies fluttering within the bushes, we set out chasing them, finally to we could spot and photograph few like leopard lacewing, Orange Albatross, Cruisier,  Sleepy Orange, Mimic Eggl fly, Variable Swallowtail, Orange-tip, Leaf butterfly, Common leopard, Himalayan plain sailor, Great Egg fly and many more.

After a cup of hot tea and noodles for breakfast, we started early and soon reached a place called Bulbulia – a decrepit watch tower overlooking the valley. The path passed through tall evergreen forests covered with bamboo. I could hear the call of peacock pheasants hoolock gibbons and capped langurs all around us.

Soon I came upon natural sulphur springs bubbling out of the ground. The atmosphere was heavy with a pungent smell caused by the methane. Here I noticed a curious phenomenon- the mud would ignite if it came into contact with a spark because of the natural chemicals in the ground!

I also noticed pugmarks of elephants, gaur, Mithun or Gayal, and sambar in this marshy area. The animals come here after dark to drink and the water is said to be salty to taste. It is also believed that this water has medicinal properties that cure some skin ailments.

I then descended from the plateau and came upon grassland about three km wide. I was on the Namdapa river bed where elephant grass grows profusely. Wading through the thick grass almost 10 feet in height was disorienting but we finally managed to reach our campsite by evening.

It was an unforgettable experience pitching our tents on the sands next to the swift-flowing Namdapa river and with the snow-clad Dapha Bhum peaks in the background.

Now it was time for a taste of the local cuisine. I started with a drink- Apong, which is a kind of rice beer. Then Baney Wangsa, our cook, prepared Chungma Rice or Bamboo Rice (made with rice rolled in kopat leaves then inserted in bamboo and baked) with green vegetables for dinner.

We retired early as it was very cold and everyone in the group was exhausted.

The whole valley was enveloped with fog on the third morning of our trek. We started early and walked downstream parallel to the river. Suddenly we came across a herd of wild water buffaloes (Babulus amee) grazing in the grassland. Waterbirds such as black storks, white-bellied herons, rufous chestnut kingfishers, cormorants, and goliath herons were everywhere.

I crossed the Namdapa River over a bamboo bridge to reach our next campsite of Embeong. Bamboo bridges found here are the only way to cross the river. During the winter when the water level is low, the Lisu tribe constructs makeshift bridges using bamboo and creepers.

Crossing these rickety looking bridges is at first a harrowing affair requiring a lot of body balance and is certainly not for the faint of heart! We were basically walking on a single bamboo stem with a flimsy railing on one side for support. The whole structure swayed maddeningly, while the swift river raged down below. A small mistake could lead to fatal accidents. What’s more, the bridges are often washed away by the rising waters of each monsoon. 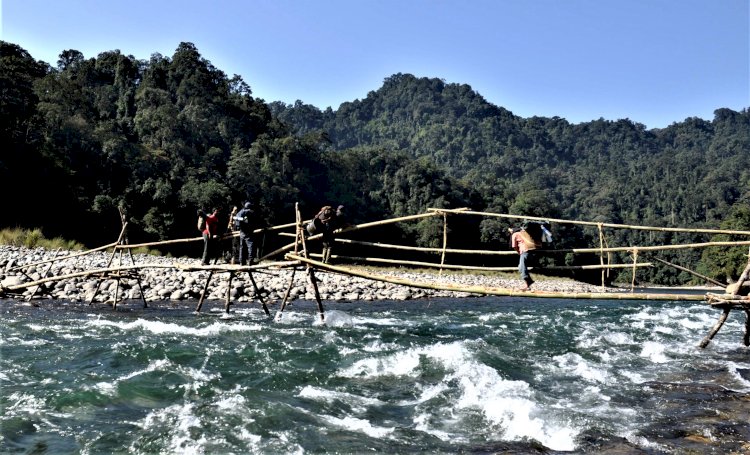 A nominal fee of Rs15 is collected from those who use the bridge. This area is also home to the Singpho, Tangsa, and Chakma tribes who are said to have migrated long back from Bangladesh. It is amazing to see these people nonchalantly carry heavy loads over these bridges every day.

Situated at the confluence of the Noa Dihing and Namdapa rivers is the Embeong campsite. From here I started immediately to visit the fascinating Lisu tribal village.

Lisu houses are unique, with thatched roofs built from a timber skeleton, walls of interwoven cane and floors of bamboo. Almost all the houses are raised on timber stilts with a staircase leading to the front door, the Lisu tribe here follow Christianity.

I was offered a cup of boiled bitter tea and sweet flour cake as Christmas was around the corner. But for the rest of the year, the diet of the Lisu people is pretty simple, consisting of boiled vegetables, meat, and green vegetables with only salt for taste.

They grow plenty of fruits such as persimmon, pineapples, oranges, guava, and sugarcane. Farming is done on the banks of the Noha Dihing River. 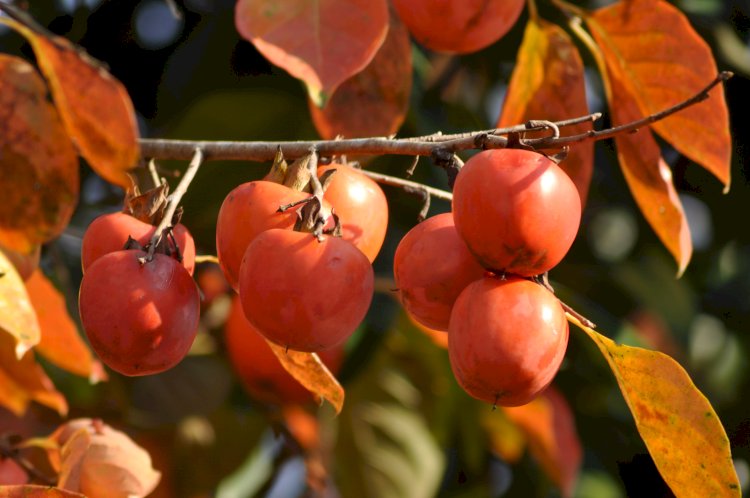 On the morning of the fourth day in magical Namdapa, we left Embeong early as usual as we had a long way to go.

After crossing the bridge we passed through grassland and walked more or less parallel to the river. We crossed many more zig zag bridges before the day was over. The last leg of our trek involved climbing up and down hills and dales. Finally, we hit the Miao – Vijoynagar road by evening.

From here I could get a bird’s eye view of the thick forest cover and could see the Noa Dihing River snaking through the valley and Himalayan mountain range.

I made my way back to the Deban camp in the pitch dark and biting cold.

This four-day circuit trek through the Namdapa wilderness was a wonderful opportunity to see up close some of the remote flora, fauna and local tribes of Arunachal Pradesh. An experience of a lifetime indeed. !