Tapaseshwara betta is a hillock close to Bangalore and is an ideal place for a weekend getaway, for those seeking adventure. The place is visited by followers of shiva in the local community. A hillfort is an interesting place for naturalists, nature lovers, and adventurers. 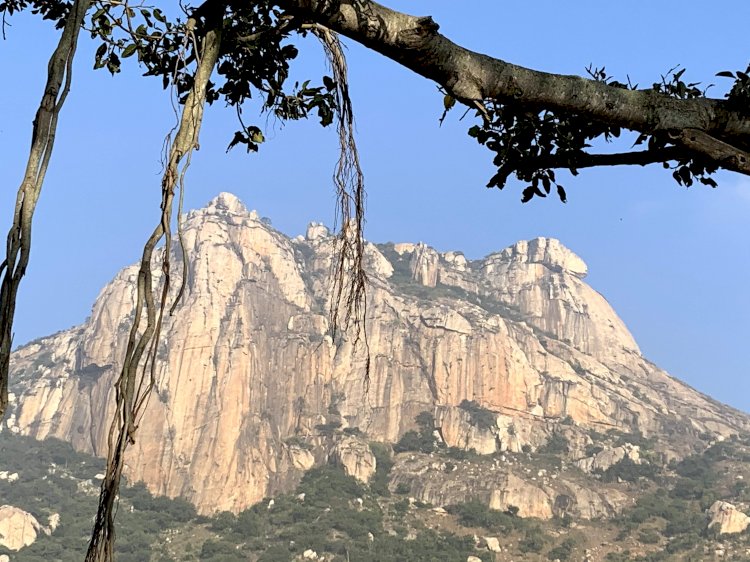 Mention Chikkaballapur comes to mind images of Historical Nandi Hills, Muddenahalli and Skandagiri, Kaiwara temple, Makali Durga, and many more.  No second thought it is an adventure seekers paradise.

Not many know about a Hillock in disguise close to it called Tapaseshwara betta Altitude 4100 ft adjoining to Kaiwara sanctuary. It was a Sunday morning me and friends captivated by elusive Hillock landed one early morning to explore it. The first rays of the sun were kissing the hill face, we had the first glimpse after taking a deviation from Chapura cross before Perumachana halli on the Chintamani Highway. The hillfort from distance looked impregnable. The villagers working in fields cautioned about the beehives and guided us to the hillock. According to local folklore, a saint stayed here for a long time at the foothills and did penance. Moved by his penance Lord shiva directed saint to give a space in the hillock later known as Tapaseshwara. He even directed them, to keep the place intact. Those hardcore and pure at heart will only visit his abode and seek his blessings!

The initial path was through rocky, boulders. After trudging through the lantana bushes we reached the base of the Hillock. The 3 sentinels were shimmering in the sunlight. 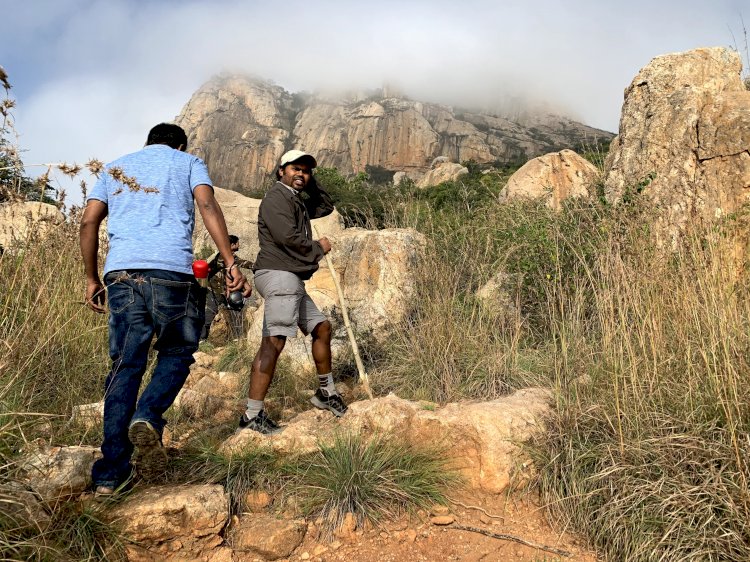 We climbed the rock face on all four and after climbing ¼ of the hillock led us to a rocky outcrop. Traversing through the slope we reached cave-like structure. 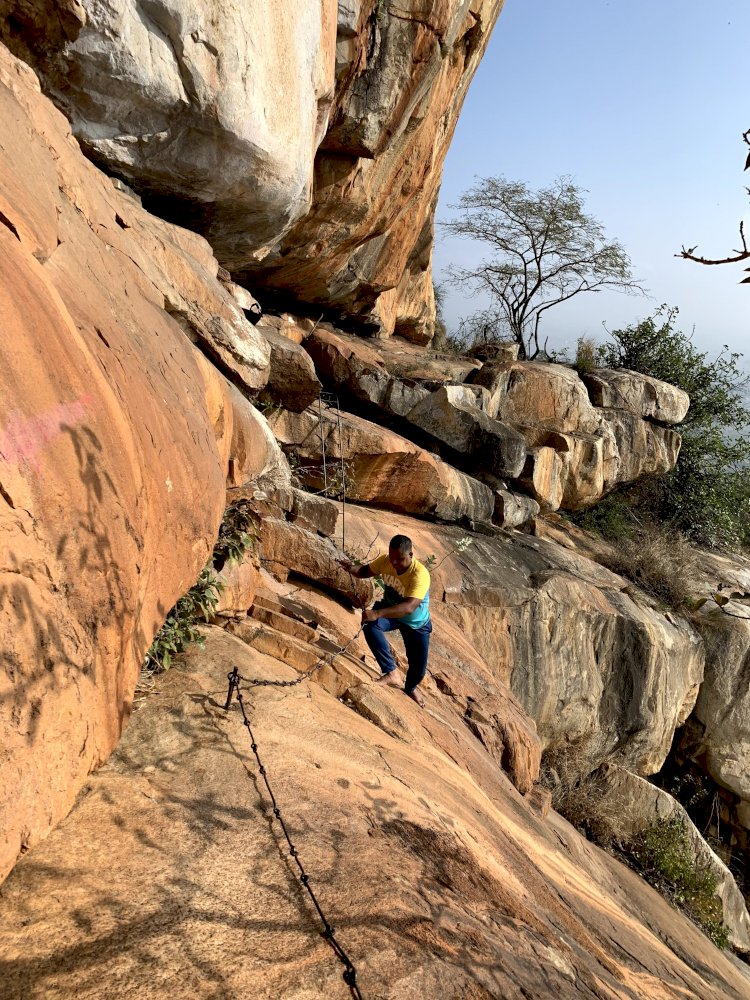 A series of ladders were placed to cross the rocky path, almost like a jigsaw puzzle. A chain to traverse the slope in almost 2 phases. Traversing the 70 deg gradient rock almost standing perpendicular to the slope was a challenge! A small mistake can fall 200 -300 ft gorge, can cause serious injury, or can be fatal too!

We one my one guiding each other succeded in reaching the cave holding roots of the ficus tree. The place was calm and cool because of the shade. A Shiva linga inside cave and Idol of Nandi – the celestial vehicle of Lord shiva facing it. It seemed only a few locals-only visit the place. We came to know that few locals visit during Shivarathri and pay respects to the lord.

The place is ideal for nature lovers, and those who seek solitude! We can sight Honeycombs of the outcrop of rock and if disturbed can be inviting a problem. We left the place leaving no trace.

The caves are amazing to explore, I could smell the pungent smell of bats inside the dark caves. I noticed few flying in the dark corners too, guessed to be Kolar Leaf-nosed bat which is in the IUCN list found in the region.

After retracing the path, we started to explore the fort. The uphill climb was exhausting. The 70 deg rock face was slippery and test your climbing skills. Don’t try if you are not physically fit! Wading through thorns, bushes crossing the fortifications we reached one of the sentinels finally on the top of the fort. 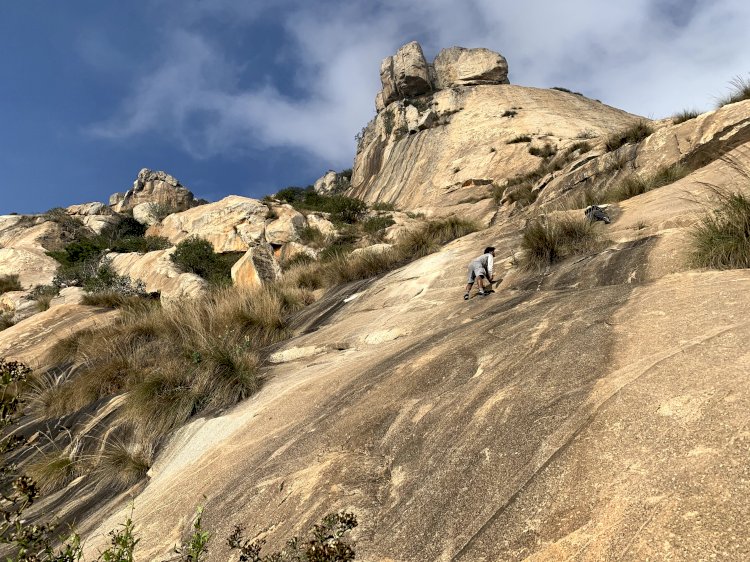 The lonely rocky sentinels seemed to be guarding the intruders and one they looked like a face of Horse! As per locals, it was built by a local palegars, which then rebuilt by Tippu and finally fell into the hands of the British.

After Crossing the gateway, we sighted a small temple dedicated to Lord Vishnu with a Garuda Kamba 10 ft height. Adjoining to it we could see few crumbling structures likely Weapon houses and an underground storehouse. The circular bastion built of mortar and bricks strategically impressive at the main entrance overlooking plains. From the ramparts of the fort, we could sight Ambaji Durga fort, Kailasa Giri, Kaiwara, dwarfed view of Rehmangarh fort and huge reservoirs in the distance 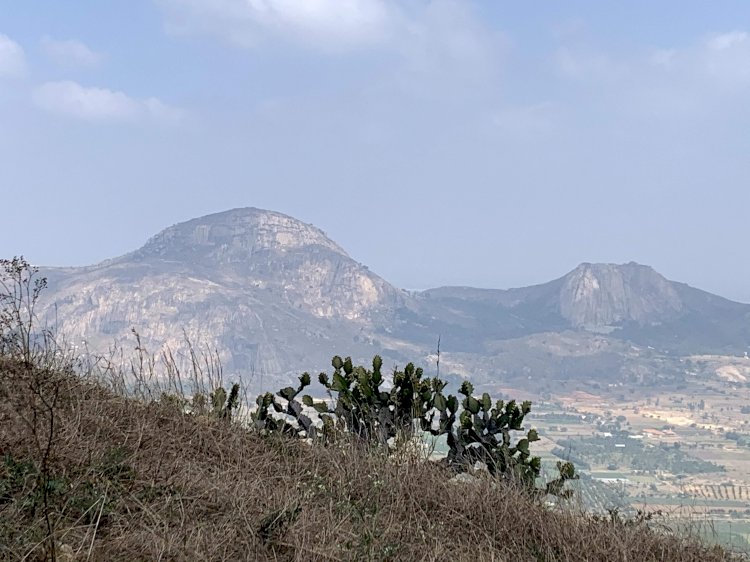 Thirsty and with no water to drink on the hilltop. Sighting few scats of some carnivore on the rocks and eerie surroundings made us feel that its time start our descent before it gets dark. We cautiously descended slowly and reached the base of a hillock in 3 phases. This was a dual adventure in a day. It was hard to believe that we made it without a local guide.

Finally felt that the place is not for fun-seekers indeed!