It is well known that Kudremukha is one of the prominent peak and must treks in Western ghats of Karnataka, and a orophiles dream to surmount it.Kudremukh National Park is a store house of surprises and greets the nature lover every time. The less known hills, of park are over shadowed by the enigmatic horse face. Bordering the park are a few hills that stand as sentinels. The hills of Baamikonda, Netravati Peak, Thirumale Guppe, Kallusanka, Attiberi, Kumbhal Khan to name a few and are no less charming than horse face. They are grasslands of heaven !.The grandeur and ethereal beauty of evergreen hills beckon the adventurous to explore it all times ! 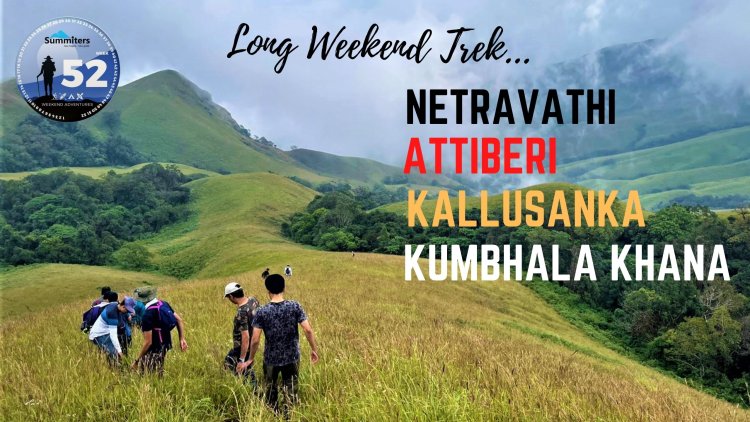 Hiking up the hills and dales during the Weekends in the forests of Western ghats has been a orophiles dream !. A all time favourite pastime of  many city breds.Kudremukha 1892 m popularly known as the Horse Face has been an Apple of Eye of all adventure seekers.There is no single hiker who has not been surmounted or has not witnessed it Face to Face with it.

The high rolling meadows surrounding the massive peak inspired us, all times, during our one sojourns in the yester years.After trespassing a few hills, during a Trans Trek across the twin hills of Thirumale guppe and Hirimale guppe we discovered a few more chain of peaks.which caught our attention.We set to discover it. 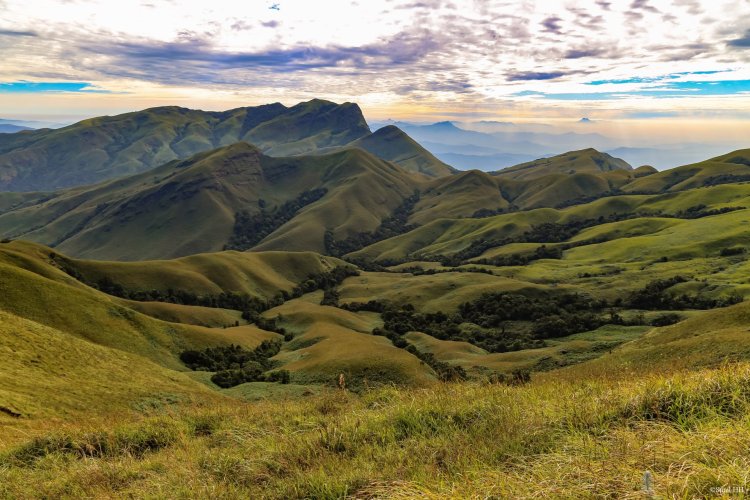 No sooner did we reach hamlet of Samse in the wee hours, we were informed that our vehicle will not manouver the curves.A  rugged 4 * 4 jeep transported us, through the narrow uphill muddy road amidst tea planatations, after 3 kms of Journey on the bumpy road we reached the hamlet of Korekallu in Guthyadka Village.

It was drizzling, we checked into the homestay with dormitory accomodation and soon squeezed into blankets to take a quick nap.We woke at 7:00 am.Soon we were served hot malenadu breakfast of Kadubu, Chutney and Avalakki.Accompanied by a guide,we hit the trail.

Initially we walked through the jeep path and later  took a dviversion from the trail.then walked uphill inside the canopy leading to the hills.The view of hills shrouded in mist was alluring.Our Guide pointed his finger and showed us the route.

The leeches had already become alert of visitors and started to approach us.The sun had disappered behind the clouds and sound of rivulets, call of thrush in the bushes was soothing to ears ! 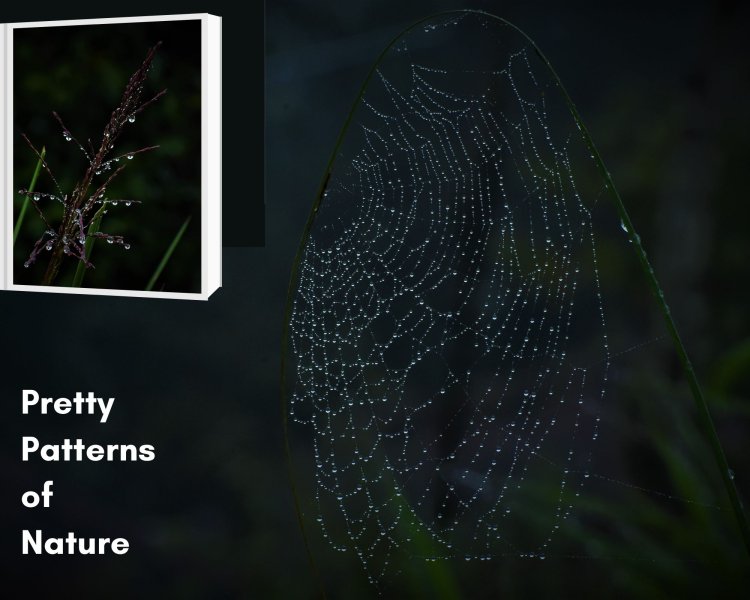 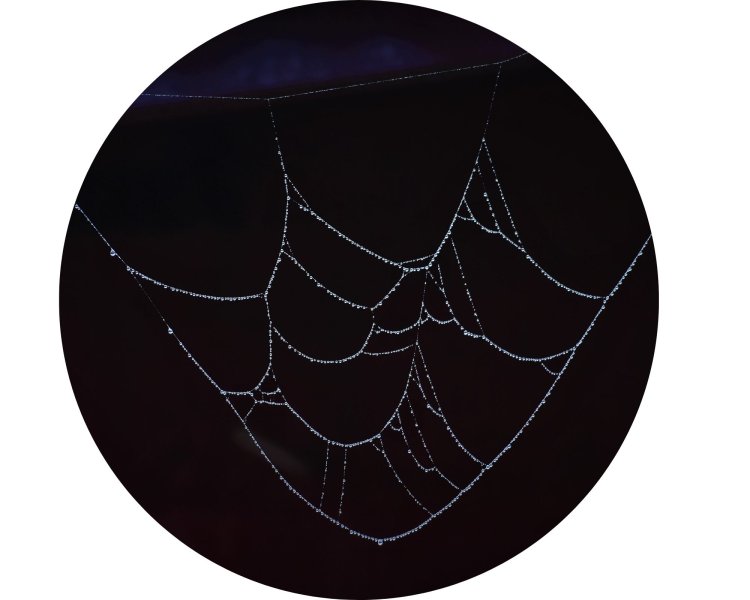 The dew drops dangling from the leaves, articulately woven spider webs, seemed to be pretty patterns of nature and was a feast to eyes. It was a photographers delight,we spent time exploring the surroundings .The true natures work of art is something to be witnessed and experienced in monsoons

We could hear the murmuring sound of waterfalls and magnified as we walked down in the green cover,The milky water was cascading down on the black rocks,and sound intensified as the wind blew.

We could see impatiens,constantly waving to us and looked pretty !.The mist drenched us,we were totally lost bathing under the tumbling water.

We walked in slow pace, manouvering the slippery rocks and bushes.The misty valley seemed to conceal the secrets of nature. The hills, enveloped in mist and whole landscape was silhoutte.We walked beside the hillside and leeches made us take breaks ! 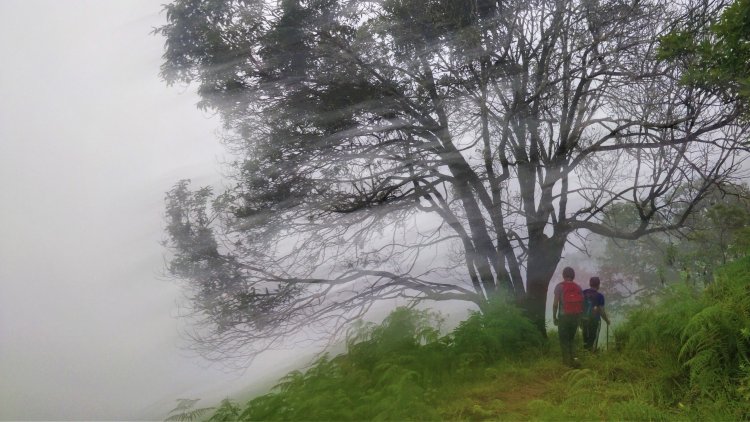 We walked further into the valley, until we came face to face with river Netravathi flowing in the dense forest.The sound of cicadas intensified and was in tune with sound of water.We crossed the river without difficulty which was knee deep.I was mesmarized to see how a small stream looks so big flowing at Parpikallu near to Dharmastala ! 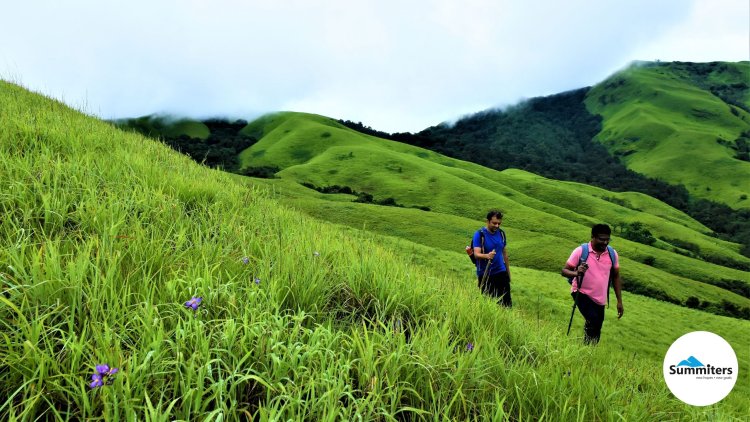 As we crossed the stream, we stepped on to the grasslands,this is from where our climb started.A chain of peaks with undualating green grasslands with green pockets of shola forest drew our attention.The distant hilly summits, though looked near was not within reach.We trudged through grass.After crossing series of grassy tops we reach the tip of Netravati peak located at 156i M.We could the hills of Amedhikal, Twin hillocks Minchu Kallu - Kumbha Kallu.Huliyethu Kallu Gudda,Gadayi Kallu and Kudremukh Peaks in the distance.

Though the chain of hills gave a illusion being connected by long ridge along the hill side,it was seperated by a shola forest or deep groge.Our intention was to traverse along the ridge and reach the adjoining peak.

Our guide led us through the slopes and after a descent a walk through the ridge we were on the hillock at a lower altitude 1470 M .The views from here was different, the conical hillock gives a best views of hills resembling humps of a camel.The ridge running along the sholas connects Hirimaleguppe with steep ascent and deep ravines.The view of lobo mane, Kudremukha peak, was simply mindblowing !.The cloud movement and the light - Shadow play of passing clouds on the grasslands was something to behold !.The endless hills and whole landscape although looked as a Painting and was surreal ! 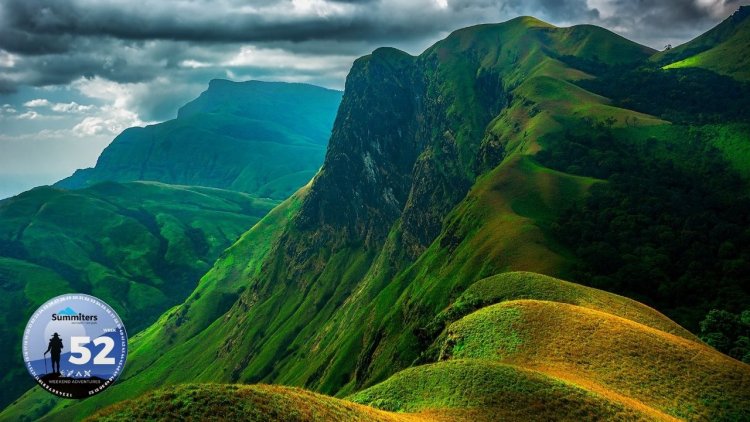 The view of  Rock fort Jamalabad rising above and almost looked impregnable, competing with the  hills of western ghats.We descended the hill and reached the stream flowing quietly in the shola forest.We quenched our thirst, followed by lunch that we had carried all way. 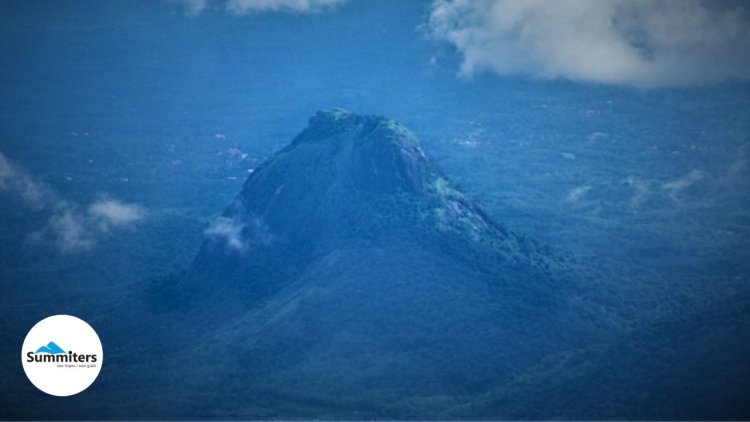 Few of the members expressed their desire to take a shower under the ice cold natural waterfalls.It was already 4:00 pm by the time we crossed the stream.We took a diversion from the trail,and after a steep descent we reached yet another waterfalls called Hole Gandi in the shola forests.The water sliding down on the black inclined giant rock and droplets falling down with gentle sound was a sight to behold !.

We lost track of time listening to the melodious music of nature and chilled below it.The place was serene with no traces of human interference.We were reminded of famous quote that Life is like a waterfall always moving, so with a heavy heart we left our footprints and walked down to our campsite.

We munched few snacks with hot coffee, with campfire for company, Later we were served early hot dinner of Malenadu cuisine,no sooner we had dinner we retired for the day.It rained heavily in the night

We woke up early to the sound of  Whistling thush in the bushes.The soft golden sunlight on the opposite hill, Baamikonda - Kalchukki was breathtaking.Our guide that we were lucky to get a good weather.Soon we had a quick Breakfast of Neer dose and Coconut Chutney.Armed with packed lunch we walked on the same path till stream.We took a diversion from the forest path and walked upward,until we reached the grasslands.

The valley that we explored previous day lied below and we had panoramic views of entire trail and shola forest.

We could not sight Kallusanka peak though walking long for hours.The hill was snugly tucked away in the hills and was out of  sight.We could spot a sambar deer running and disappered into bushes, and pair of Black Bears on the grasslands from a distance.

After climbing steep slopes,we reached a lonely tree and walking past a few minutes which marked the Kallusanka peak.From here we can View the Kudremukha Peak, Durgada Habba and Gomukha Peak.

After a  long beak ,we descended the peak and took to diversion till we reached the base of hill,later traversed the ridge leading to Kumbhal Khan.The hill those seemed nearer was more steep with thick grass. 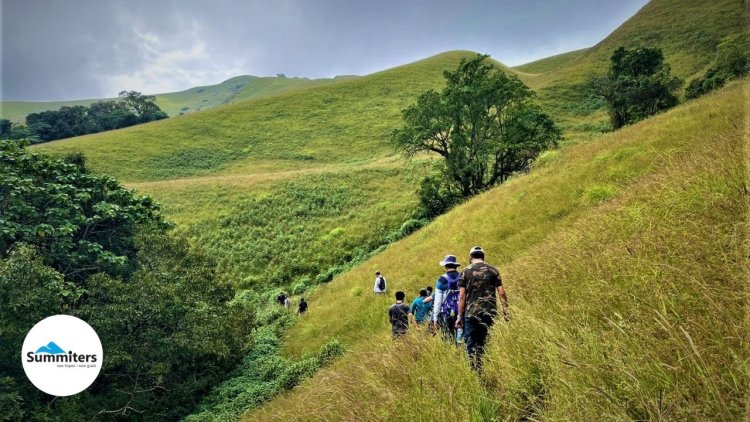 We climbed in a zig zag route and finally reached the summit.The chain of peaks surounding the hill looked beautiful in the contrasting colours.In 2 days we had completed 4 hills. 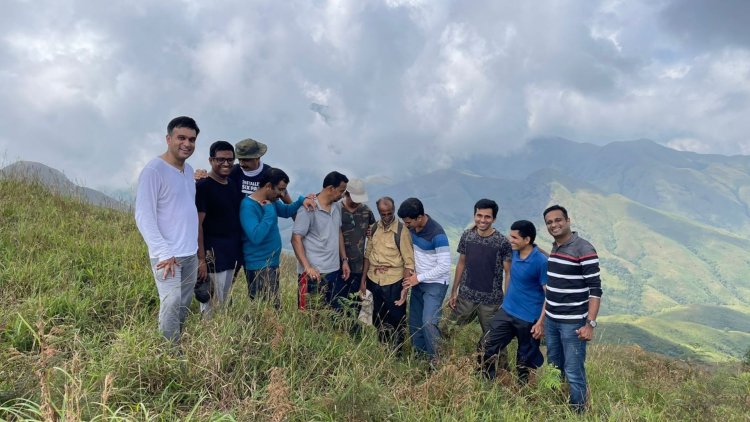 Our long time dream had atlast fulfilled !.Kudremukh peak, glittering in sulight suddenly covered in thick black passing clouds.Our guide cautioned about rain and slippery descent.The group congrajuated each other for success.We were on the grasslands leading to stream !