The Himalayas are known for various flora and flora with a rich diversity of forest wealth. Having tremendous economic importance. Guggul is one such plant used for dhoop during puja or ritual. The herb grows a high altitude and only a few locals can identify it. 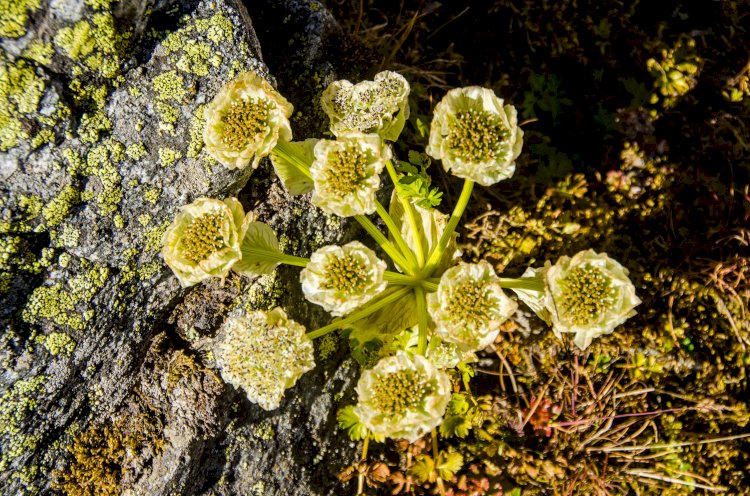 We had just reached HomKund after a day’s trek from Dodhang Base Camp. The Summit of Nandagunti Peak 6527 m was glittering in the yonder and peak was mirrored in the glacial pond. A sweet aroma was lingering around. Suddenly Chain Singh our guide throughout the trek dashed to ridge nearby and pointed at  a green plant and said -  yeh guggal sir jee….!  , with pollen grains and incessantly began to describe about the medicinal properties of the plant. Mentioned that it is prized throughout the Himalayas .

This natural Guggal is with a botanical name Jurinea dolomiaea. The roots have a resin and is an important aid to meditation rituals and used as dhoop during puja and religious ceremonies. It is often burnt in monasteries during empowerments and is believed to dispel negativity. This species generally grows in the pastures and morainic alpine regions in the altitudinal range of 3400 masl to 5000 masl in Indian Himalayas, Nepal and Pakistan

In sanskrit it is known as Jatukanda and Hindi Gagal, Gugguluka, dhoop or Guggal. It is a prostrate stem less perennial herb. Guggal is a sticky gum resin from the Mukul myrrh tree, it plays a major role in the traditional herbal medicine of India. It was traditionally combined with other herbs for the treatment of arthritis, skin diseases, pains in the nervous system, obesity, digestive problems, infections in the mouth, and menstrual problems. In the early 1960s, Indian researchers discovered an ancient Sanskrit medical text that appears to clearly describe the symptoms and treatment of high cholesterol. to eruptions. Stimulant, given in colic, also in fever after child birth. Bruised roots are applied Highly recommended! Simply burn on a charcoal disc or combine it with loose sand. The species is an important source of active constituents, used in Pharmaceutical industry and various perfume and fragrance industries. The phytochemical studies also revealed that the alcoholic extract of plant possesses antimalarial and antibacterial properties

Plants having medicinal properties present both blessing and a dilemma for the Himalayan floral biodiversivity. The blessing comes in the form of abundanance and diversity of flowers. After winter especially after onset of monsoon, when alpine meadows are in riot of colors. The dilemma is that many of the herbs and shrubs of forest and meadows are much prized for their unique uses. In India, the plant is exploited on a large scale for its valuable tuberous roots. These valuable properties make it prone to the over exploitation and due to diminishing populations in the wild, the plant has been sighted in Pin valley and Buranghati valley is categorised as vunerable for Himachal Pradesh and endangered for Jammu & Kashmir region. Studies were done in the alpine meadows of Tungnath and Bedni region in Rudraprayag districts of Uttarakhand region. It is listed as threatened and has been in negative list in Uttarakhand region.

This species is globally disturbed and every year, large volumes of medicinal plants are collected unscientifically causing depletion of resources and degradation of habitats.