Pandava Matti is a less known hillock in the Jogimatti region of Chitradurga, the deciduous forest to home for unique flora and fauna. It is the highest point in the region, it is known for caves and scenic beauty. 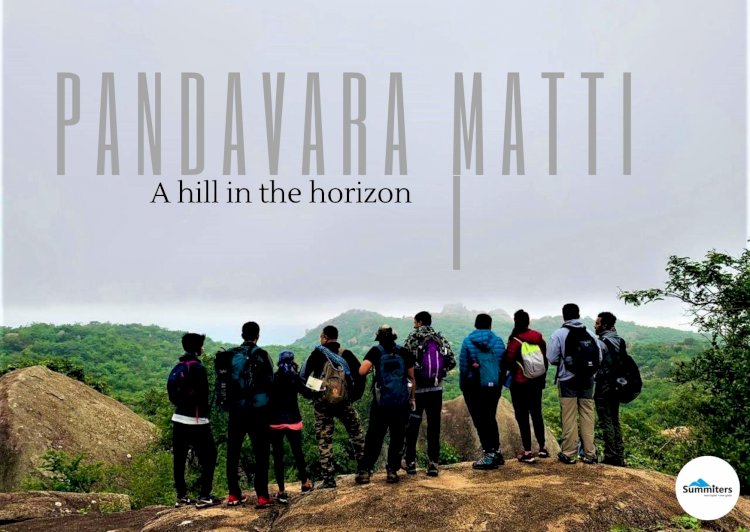 View of Hillocks in the Horizon

To mark the 74 th year of Indian Independence, I was looking for a  place to celebrate, with a closed group of  10 friends after a long time, amidst nature which meets COVID policies,  in a less known place around Bangalore. After delving into my records, I  decided that Pandavara  Matti or Pandavara Mata  - Highest Hillock in Jogimatti and is also referred to as Ballalarayana Netthi would be the right concoction of  Adventure and Religious fervour.

The hills of  Jogimatti in conjunction with Chitradurga is known for a chain of rocky hills and needs no introduction for adventure geeks or historians.

After  5 hours of journey from Bangalore, we landed in wee hours in Chitradurga, the hills were in a perfect silhouette and welcomed us. In a shortwhile we were at  Jogimatti, Nagu my friend was enthusiastic to meet us, and was our local support for our venture.

Jogimatti is a  green patch of forest situated at 3400 ft above sea level, in the rocky region of  Chitradurga, It is very clear that the forest got its name from a saint called ‘Jogi’, who was known for his social services, Jogimatti is home for rare animals, including leopards and sloth bears that are on the verge of extinction, and the plants with medicinal value. In the midst of the forest, there is a waterfall called ‘Himavad Kedara’ that rejuvenates the visitor. Jogi Matti is a trekkers delight and must-see place for nature lovers in a pristine state and is referred to as ' Ooty of Karnataka '.

After an ice-breaking and briefing session, we passed the gate of the reserve and travelled on the narrow road for about 7 km inside with forest on either side. Soon we could literally see the green cover and feel the change in landscape, with a nip in the air, and every blade of grass looked green.

After alighting from our vehicle and we passed through the thick veil of thick mist, reached a  temple all-powerful of Goddess Chowdeshwari in the midst of the forest. Our intension was to start the trek from the guesthouse and reach Aadumalleshwara by 2 pm after a circuit trek.

We walked through the lantana bushes and forest of  Red Sandal trees – Santalum album. After about 30 min, passing through the rocks we reached a vantage point from where we had a Panoramic view of hillocks and forest of Jogimatti reserve forest. The nature water tank  Dhone served us as an oasis to refresh and had a luscious breakfast of Poha and Mirchi Bajji facing the hills in the horizon.

From here we could see the Pandavara Matti, Rabbit ear and chain of hills in the distance and was alluring. We started along the boulders and reached a huge water body surrounded by hills, the lake which serves as a waterhole for the animals and a hideout for leopards in summer. After taking a deviation from the lake we reached a  huge cave next to the lake,  which was more than 30 feet wide and 15 feet high, which is a favourite hideout of sloth bears too. 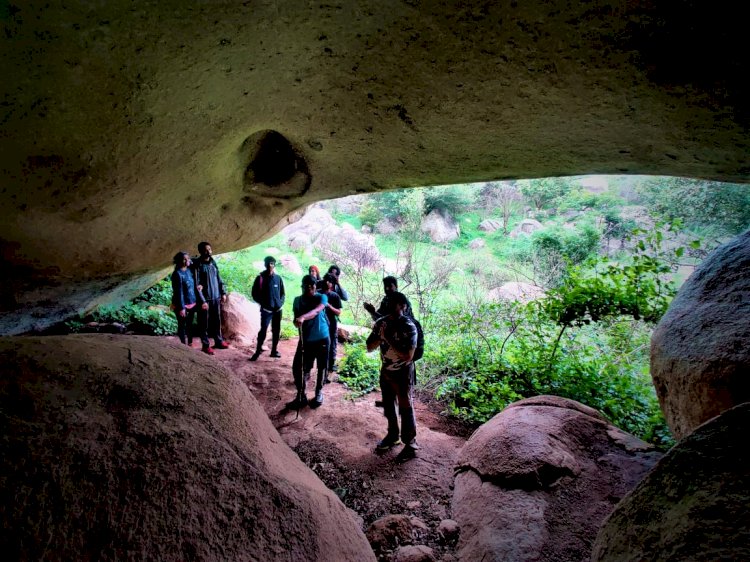 The weather was cloudy and favourable to trek. Though a reserve forest, we could trees of Sandal being, severed by poachers, as it is the costliest wood in the world. It is smuggled where trespassing is a serious offence. Karnataka - Land of  Ethereal beauty is referred to as  Shrigandhada Nadu by this tree known for its aroma. Only found in Karnataka !. I felt that stringent rules and actions by the forest department to stop this menace has to be taken on war-footing immediately without delay.

As I cleared the thorny bushes of Sickle bush trees known as edaari in Kannada which grows profusely here, I could see suddenly the hillocks emerging suddenly through the foliage, as  I stepped out from the deciduous forest into grassland with colourful flowers. A  Common leopard, fluttering in the air caught my attention and soon followed it. 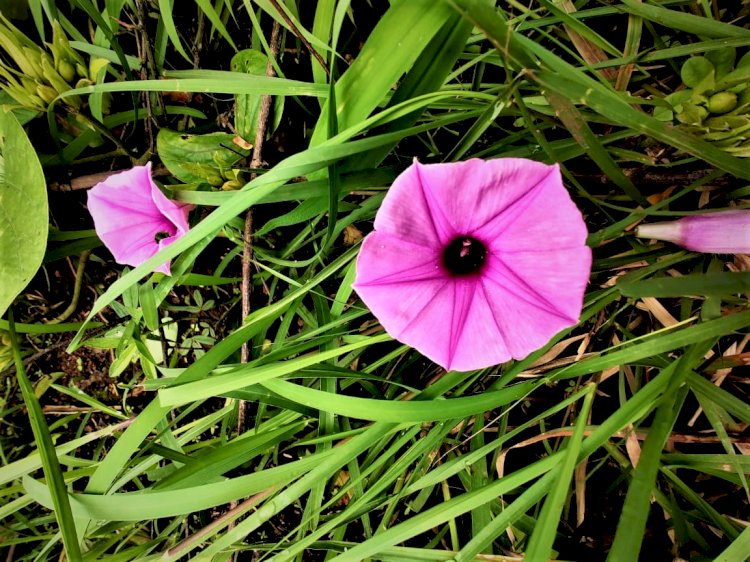 After making a path through the thorny bushes and climbing the rock face 60 deg we reached the entrance of the first cave. The wide oval cave narrowed into a crack, with light peeping inside and illuminating the cave. We bent our heads and followed Nagaraj, it was literally a puzzle, to reach, which was located at the ¼  height of the hillock. 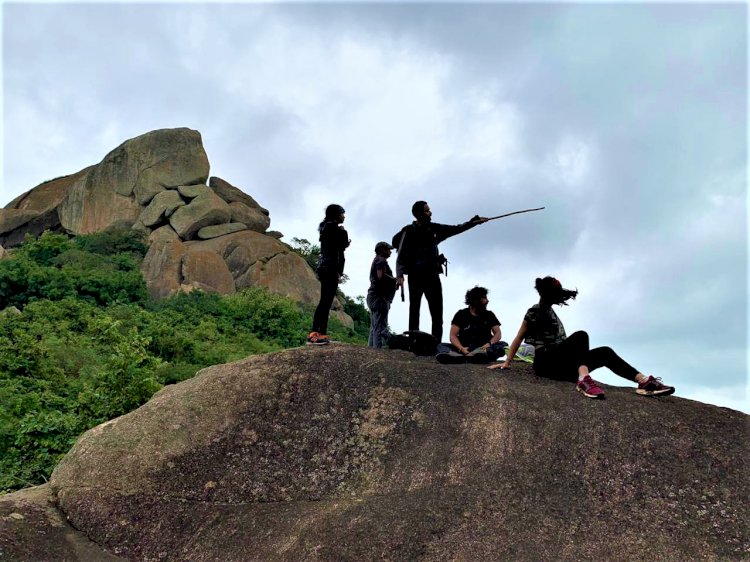 The path narrowed and we were in front of another cave, 1 foot wide. which was the only way to gain access to reach hillock. A Nandi tree – Spathodea campanulata which has grown next to the rock, was blocking the entrance and was difficult to cross it. We did not have the intension to cut it nor retreat!

Our firm determination made us explore, I and Ananth decided to take different routes, Ananth climbed the steep rock below a ficus tree with help of roots and then, successfully clambered on all four on a 60-degree patch of rock to gain entrance to cave. It was not an easy task, to reach the top. Other members with the help of 50-metre climbing rope anchored to a rock, one my one supporting each other, shifting backpacks all made up to the entrance of the cave covered with elephant grass.

After passing through the cave we reached the first viewpoint of the Hillock, with huge boulders facing each other, with views of  Davalapanna Guda – looking like matted hair of Shiva, Kindari Betta, ramparts of Chitradurga fort and Chowlappa betta and waterbodies.

A small pond served as a source of water and was not suitable for drinking. I could see fresh scats of some carnivore, here. The wind blowing and sound wooo.. wooo…!  made us to just keep quiet and fill lung full of fresh air.

Few of the members got bruises while trudging through the thorny bushes. Sapna too was not spared and had too many bruises, looking  at her Ananth added folklore saying in Kannada

The elusive hillock which seemed, and literally looked like a dwarf was gigantic was testing our patience, motivating us again to set new hopes - new goals and finally pushing us to get high in the Mountains. Our guide who had visited this place a long time back was a bit confused about the path after this patch. We descended the hillock, taking a few steps, after a bit of clambering, and traversing in the cave below we reached a  rockface located,  in the far corner of the cave in 2 phases. Adjacent to it lay 1 foot wide and  100 feet long crevasse running along the rock wall. With no anchor points or holds,  to climb the rock wall from the first wall was the only way to reach to Summit of a hillock. A small mistake or slip would cause a serious injury or maybe fatal was my assessment!

After a bit of exploration and considering the safety of group  I, made a  decision to retreat. In the meanwhile, Ananth again motivated to give a try and finally climbed the wall about 8  feet high. Slowly, supporting each other members we made up to the top, after walking on the inclined narrow path,  it led us to the summit. The view from hillock was, simply astounding. The hills Davalappana Gudda, Chitte kallu and  Erannana kallu seemed competing with each other.

We did not have much space to stand in a line, instead of jostling for space, we made a quick group photo, squatting on hind legs, sticking to the rock, we sang National Anthem and remembered the heroes. Though few expressed interest to stay for a while, I did not agree to it. I could feel cool air blowing non-stop, water droplets on the chin. I remembered that in mountains that Summit is optional whereas getting down is mandatory. Considering the safety of the group, and the descending path before it rains. We made a unanimous decision to quickly head downward slowly. 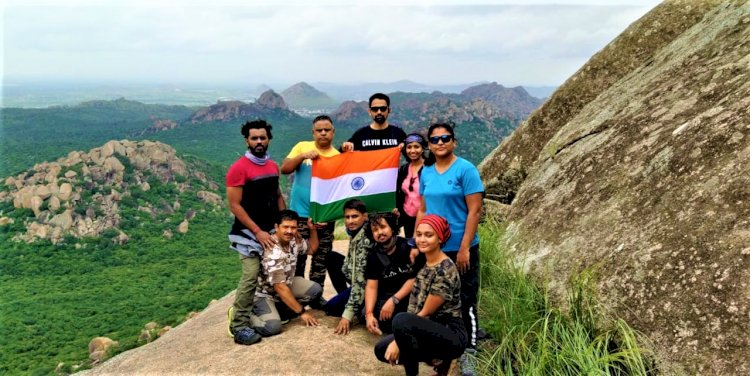 We climbed down cautiously on all four, sliding and reached the bottom of the cave in the same route at 1: 45 pm. No sooner did we reach, the grass patch, I felt that rain god  Varuna was merciful on all of us till descent. It started to rain heavily after we finished our lunch at 2:30 pm. We wore windcheaters and walked amidst bamboo trees.

After walking for 40 minutes,  we reached grassy patch, after almost circumambulating the hillock, the elusive hillock looked different from different directions and almost impregnable. A bunch of red and yellow flowers swaying greeted me from the bushes and drew my attraction. It was Gloriosa Superba – the red and yellow colour flower known as Gowri Pushpa - Arishina and Kumkuma in Kannada, Glory lily, Fire lily, Flame lily, and was in full bloom. The showy flowers have six reflexed tepals and long stamens with large anthers. Flowers are followed by fleshy, oblong fruits. 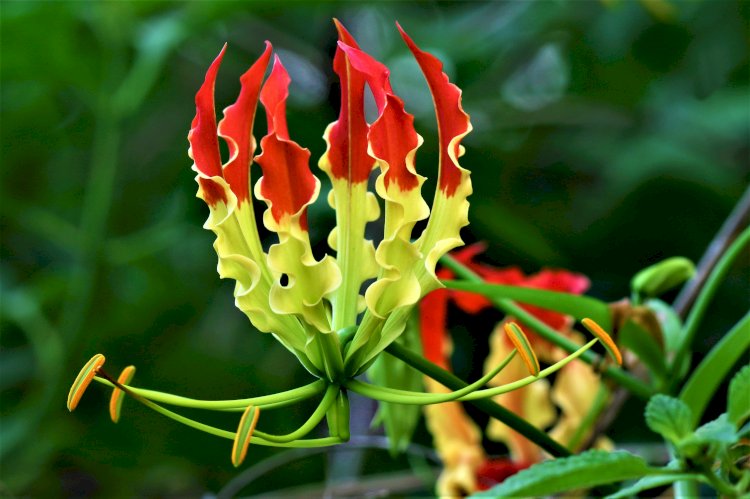 The invigorating fragrance of earth lingering in the air after the shower was simply great !. The rocks of different shapes, sizes, few resembling a cairn, animals and balancing feat was true natures work of art. After walking through thorny bushes, with few of the members, I reached the jeep trail. I just looked around and tiptoed into the bamboo bushes, a winged beauty white moth stretching its wings, with grey-white stripes, running parallel on either side of wings caught my attention, I moved forward and later came to know later that it was Micronia aculeata belonging to Uraniidae family.  It is identified and also called grey stripe moth by some naturalists in Wayanad. It is found throughout India china, Taiwan, Sri Lanka, Burma, Andaman, Java and Borneo. The adult moths of this species have speckled pale white wings with two submarginal bands. Each forewing has a hooked apex, and at the tornus of each hindwing and there is a short tail with a black spot. 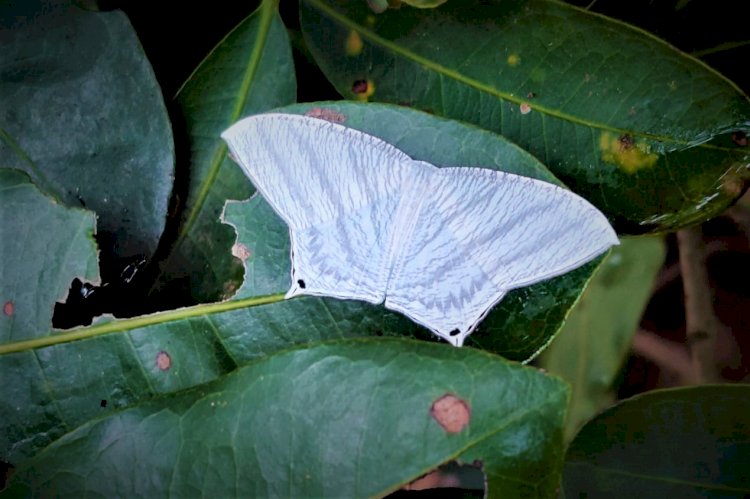 Like many moths of this family, it spreads its wings open flat in the resting posture and is a day-flying moth. I was engaged, in photographing and curiously watching it. Other members joined us after 15 minutes.

After walking for about 20 minutes, we reached the base of Chitte Kallu, we took a diversion from here and reached the Aadumalleshwara Zoo. I relaxed on a  bench overlooking the hillocks. The black clouds loomed in the distance and there was drizzle again. We all felt that we were fortunate to complete it successfully. It was exactly after 10 hours we had reached our destination.

Karnataka: The Joy of 52 Adventures to Choose for Every Weekend

Chikmagalur is blessed with scenic spots on the banks of Bhadra river . Kudure Abbi...

A place to stay during travel is always a necessity and priority. If destination...