10 Great Books on Trekking and Mountaineering. Entertain the Adventurer in you during Covid -19 Lockdown

During lockdown normally, people who have traveled extensively and been outdoors will get bored staying at home, to kill time they get it to the habit of watching television, pressed to Chat on WhatsApp messages. The best way to spend time is to grab a book that is laying in the bookshelf for a long time 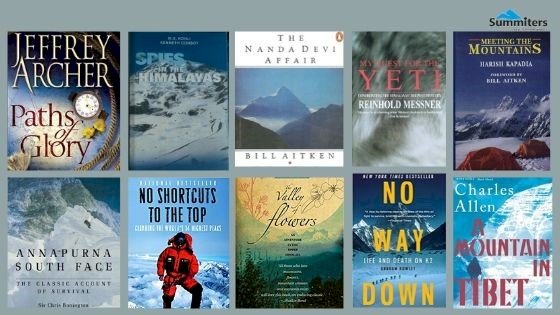 Explorers, Trekkers, Mountaineer or Travelers travel to view the beauty of the world and find true happiness amidst all the adventurous experiences. It is indeed difficult to hold back an explorer from travelling and experiencing a different kind of life each time. The lockdown seems to have a psychological impact on all of us and while we are willing to step out and breathe the fresh air, the voyager is us is facing a unique struggle causing nuisance to us.

To keep the adventurer in you entertained, we have compiled a list of a few Trekking and Mountaineering books for you. As books have always been considered as a human’s best companion and reading does only help us combat the psychological effects of loneliness but it also helps us experience a whole new world.

A book inspired by real-life event surrounding George Mallory’s adventure and whether he reached the summit of Mount Everest in 1924 or not, with fictional addition. This is a story of George Mallory, a climber who climbs Mount Everest twice with consistent determination and immense passion.  It also demonstrates the romance between him and his wife, Ruth, who dutifully supports his husband’s passionate dream by trying hard to mask her own anxieties and fears regarding the climb. As the book progresses, you will experience the thrills of his expedition and the end of the book will leave you with mysterious questions.

Another book inspired by a real-life event regarding a secretive mission to spy on China, by planting a nuclear- powered spying device on the peak of Himalayas to listen into China and monitor its missile launches.  The mission, undertaken in 1965, was a joint effort of India-US Intelligence and a result of first nuclear test in 1964 by China. It was led by Indian mountaineer, Mohan S. Kohli, conqueror of Everest, who narrates his experiences of dangerous climbs, delayed weather conditions, cancelled efforts and struggle to locate the missing device that sill may or may not pose a threat to the Indian rivers, as the device may seem to leak lethal contamination.

Reinhold Messner is a record breaking mountaineer, who is not only known to be the first person to climb Mount Everest without oxygen, but also the first one to have climbed all 14 of the world’s tallest peaks. This book provides his own first hand experience on the quest to explore the mystery behind Yeti, the Himalayan creature of legend known as the abominable snowman. The book offers an interesting narration of his hiking experiences through Nepal, Bhutan, Ladakh, Northern India and Tibet, along with some insight on the Chinese regime in Tibet during his visit.

Bill Aitken, a Scottish writer is known to have grown spiritually with the Indian rivers and passionately with the mountains during her 30 years stay in India. He describes his attempt to explore the beauty of Himalayan peaks as a romantic affair rather than a professional one.  The book invites you to the Nanda Devi Biosphere Reserve while he talks about his love for the summit of Nanda Devi, insights about the Garhwal tribe and the life of the people in the mountains.

Chris Bonington is one of the fathers of modern mountaineering. Chris and his team of mountaineers were the first climbers to attempt this climb at extreme altitude. Their target was the south face of Nepal’s Annapurna:12,000 feet of steep rock and ice leading to a 26,454 ft. summit. The book describes their climbing experience in detail, right from their climb towards the summit and back.

Graham Bowley is an investigative reporter of New York Times. This book traces the 2008 disaster of K2, second highest mountain in the world that witnessed the death of 11 climbers. Graham Bowley interviews hundreds of people for this, and that definitely contributes to making this an interesting and well researched book. It highlights the heroic stories of climbers along with survival and tragic death stories of a few.

Frank S. Smythe was an English mountaineer, author, photographer and botanist. Frank Smythe discovered the lush and vibrant Bhyundar Valley, the Valley of Flowers, when he was returning back from his victorious Mount Kamet climb in 1931 and were looking for shelter from rough weather. Smythe then returned to the valley for six leisure weeks with four Tibetans from Darjeeling in 1937 and widely explored the valley, identifying and collecting flowers and seeds. This is one of the great books that capture the liveliness, journey of solitude and introspection with natural writing.

Harish kapadia is is a distinguished Himalayan mountaineer, author and long-time editor of the Himalayan Journal from India. The success of his first book ‘High Himalaya Unknown Valleys’ highlighted that there is much interest in the smaller mountains and unknown valleys and more information was required. Hence, this book follows a similar vein. This book contains different expeditions from 1969 that covers his 35 years of Himalayan travel, from Ranch Chuli, Rangrik Rang, Manirang to Kinnaur, Kumaun, Garwhal and Ladakh. The book caters to not only trekkers and mountaineers but also explorers. Since, the author not only talks about a few unexplored treks, trekking hints, his personal experiences but also suggests things to be done and places to be explored.

Charles Allen is a British writer and historian and his work mainly centers around India and South Asia. This book takes you to 18th century when navigating and exploring places was quite different from the present world. The author talks about the discovery of the holy mountain, the mythology surrounding it, Tibet and outlines the sources of the four major rivers: Ganga, Indus, Sutlej and Brahmaputra. If you have an interest for history and like to delve in the details, then this book is a great read for your curious mind.

Edmund Viesturs is a high-altitude mountaineer. He is the only American to have climbed all 14 of the world’s 8000m peaks and fifth person to achieve this without using supplemental oxygen. This book chronicles his aim, dedication, spirit, willpower and immense passion that revolve around his pursuit of climbing 14 highest peaks; from the age of 14 to the age 46. He talks about his success, failures, struggles, challenges, emotional upheaval and events he encountered on the journey to conquer his dream.