Lakshminarayana Temple of Hosaholalu is a Hoysala Temple built by King Vira Someshwara dating to 1250CE. The temple is located at a distance of about 2km from the taluk headquarters of Krishna Raja Pete ( KR Pet ) in Mandya District of Karnataka state. 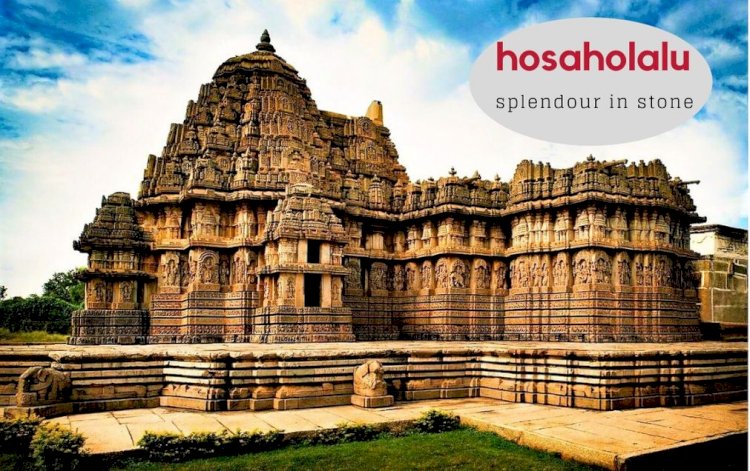 Karnataka is famous for its Hoysala temples such as Belur, Halebid, and Somanathapura. They are the only few temples that come to mind of architecture and beautiful sculptures. But very few are aware of many other less known Hoysala temples scattered across and away from tourists.

Mandya popularly is known as the sugar capital of Karnataka, the district is blessed with few temples of Hoysala reign. One such temple is Lakshmi Narayana temple located in Hosaholalu village which is about 45 Km from Heritage city of Mysore and about  25kms from Melukote – A popular Vaishnavaite temple.

Lakshminarayana Temple at Hosaholalu is a Hoysala Temple built by King Vira Someshwara in 1250CE. The temple is located at a distance of 2km from the taluk headquarters of Krishna Raja Pete. There are many lesser-known temples built under the Hoysala Empire between the 11th and 14th centuries in Krishna Raja Pete. Lakshminarayana temple is one such of the many unknown Hoysala temples

There is no gopuram at the main entrance and you are welcomed by a beautiful Dwajasthambam Pillar which was installed recently. The front structure is not in the Hoysala style and it was constructed during the later part of the Hoysala kingdom. but the main structure is very beautiful and this is a Trikuta type which literally means "three towers"

This temple is a Trikutachala and is facing East direction. The temple complex houses Sri. Lakshmi Narayana ( Vishnu ) facing East, Sri.Venu Gopala Swamy facing North and Sri.Lakshmi Narasimha facing South direction. The moment we enter the temple, we can find attractive carvings on the pillar at the entrance, with 16 corners, 32 corners, and 64 corners respectively, the first four pillars are star-shaped and the remaining four pillars in the navaranga vestibule are bell-shaped with extraordinary carvings on them.

As we take a stroll around the Navaranga, one can find an intrinsic work executed in the roof and enjoy the beauty of the domical Bay Ceiling in the Navaranga on Lakshmi Narayana Temple. The ceilings of this temple is divided into 9 bays. Each bay has a deep and intricately carved domical ceiling.
In this domical ceiling, you can see a bullet-like thing carved on the circles. These are of different size and on the inner 3 circles, they are 16 each in number, and on the exterior larger circle they 110 in total. There are 4 Kirthimukhas on the four corners of the ceiling.

The central domical ceiling is the most attractive one, having the carving of Kalingamardhana in the middle. Each rooftop is different from the other and possesses a unique design and locking mechanism such as a single washer, double washer, hexagonal nut. An Engineering Marvel indeed! It is surprising to know that four most decorative and intricate pillars in the middle of the hall have stood for 800 years withstanding the weight of the ceiling till today.

As we enter the temple from the East, one can find the carving of Lord Ganesha, located between the Sri. Venu Gopala Swamy and Sri. Lakshmi Narayana, the intent of this is to have a look at Ganesha - The god remover of obstacles and then proceed towards watching black idol of Venu Gopala Swamy playing the flute..
The original Venu Gopala Swamy has been restored at Kanamabadi Katte backwater, but recently during the 1950s a new image was sculpted and restored here. One can see the small idol of the original image on the doorway of the shrine.

Lakshminarayana Temple is a splendid example of a Trikuta vimana (three shrined) temple is built on a raised platform that has a star shape as in other Hoysala temples. There is a structural addition to the main entrance built during the Vijayanagara period. The central shrine has a tower (Shikhara) on the top. The other two shrines are square in construction with five projections. The central shrine is well decorated and its tower has a sukanasi (nose) which is a lower tower over the vestibule that connects the shrine to the hall. The sukanasi looks like an extension of the main tower over the central shrine.

The Lakshmi Narayana idol in the sanctum is very beautiful and one can observe the Dashavathara being sculpted in the Prabhavali. The idol itself is very cute and attracts one's attention by the delicate work. On the entrance of the Garbhagirha Sanctum, one can find the Dwarapalakas, who are standing with greater details with the ornaments and clothes they are wearing. Also, they are housed in a mandapa which is decorated with Nagara, Dravida, Kalinga, Vesera, and Bhumija style of Gopuras or Vimanas.

Also, one can find the fine lacework or embroidery work being executed at the entrance of the Sanctum. A small idol representing Vishnu has been identified on the rooftop as well.

Going further from Lakshmi Narayana, one can spot the consort of Shiva, Parvati idol in the form of Mahishasura Mardini, and one of the masterpieces of art. One can clearly see the broken rib cage of Mahishasura protruding out, because of the trampling by foot by Goddess Parvati. The Lakshmi Narasimha idol is beautifully carved and his consort Sri Lakshmi is seated on the left thigh of Sri.Narasimha.

After having a view of the temple from inside, one has to see the very minute information present on the pillars and the roof. With a keen sight, one can find Sri.Anjaneya Swamy drinking Coconut water on the Right-Hand side pillar before the entrance of Sri.Lakshmi Narayana Garbhagirha. The carving is so compact and it can be covered with a thumb.

While coming out of the temple one really feels the workmanship executed on the pillars especially and each pillar is having a unique design, also to the surprise, there is one masterpiece which is executed on the pillar with 64 corners, one can insert a small pin behind the corners and also on the top of it, one can see the intricate design work being executed and the hollow behind the work is simply awesome. Lakshminarayana temple belongs to the second phase of the Hoysala construction middle of the 12th century. After admiring the workmanship of the craftsman and step out of the temple. The whole outer wall of the temple complex Pradakshina path is covered with sculptures from Hindu epics Ramayana and Mahabharata. The image of Vishnu, Lakshmi, Parvathi, Shiva, Brahma, and Ganapathi along with other deities can be found across the temple. The temple consists of two sets of eaves and six moldings at the base of the outer wall. The carving of Lord  Krishna doing Kalinga Narthana ( Mardhana ) on the North-Western corner of the temple. To the right side, one can see Lord Garuda greetings Krishna and to left Kaliyas - The Poisonous snake's wives seeking help to relieve their husband. Below depiction of river Yamuna with aquatic creatures in the water under the hood of a serpent. The first eave is located where the superstructure meets the temple outer wall and the second eave runs around the temple and about a meter below the first eave. There are 120 images around the temple wall panel. Being a Vaishnava temple, there are 24 sculptures of Vishnu standing upright holding in his four arms the four attributes, a conch, a wheel, a lotus, and a mace. A Carving of Vaikunta Narayana seated on a seven hooded serpent reminiscent of Badami. Indra seated in celestial elephant Airavatha, Garudaruda Lord Vishnu with his consort, Chaturmukha Brahma,  The carving of Samudra Mathana - The churning of the ocean of Milk the best known mythological event of Bhagavata Purana can be seen here.

The six horizontal moldings at the base of the outer wall are intricately sculptured and are called a frieze. The first frieze depicts birds, the second depicts Makara (aquatic monster), the third frieze has depictions from Hindu epic and other Purana stories of Hiranyakshayapu and  Prahlad of Narasimha Avatara narrated in a clockwise direction. The fourth frieze has leafy scrolls, the fifth and sixth frieze have a procession of horses and elephants respectively. The base has six stories of pattikas festooned with swans, elephants, leafy vines, and scenes from great epics.

The visitors look bewildered after a circumambulation and appreciate the architects from their hearts !. The best time to visit Hosaholalu is between the months of October and March.

Lakshminarayana temple of Hosaholalu is located at a distance of 2km from the taluk headquarters Krishna Raja Pet ( K.R. Pet ) in Mandya district of Karnataka.

By road, Hosaholalu is 60km from Mandya, 45 km from Mysore, and 160km from the state capital Bangalore.