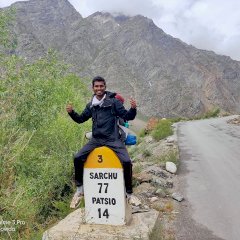 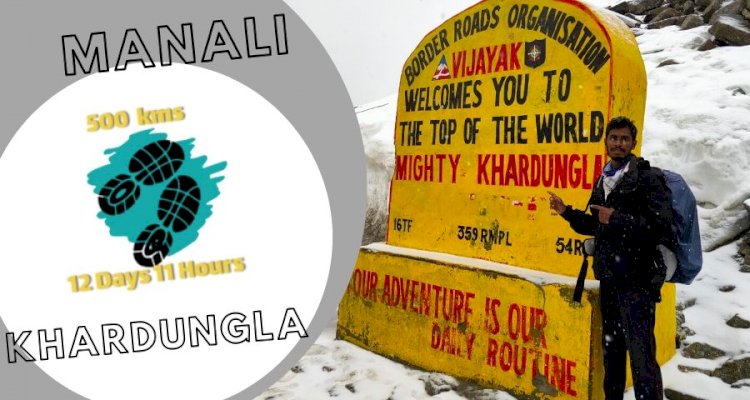 In 2018 I did a ride in  Dio Scooty with my friend from Bangalore to nepal -china border Bhutan covering 7000kms in 21 days and 8 states in India... so I wanted try out something bigger than this bike ride which I can talk about for at least an yearlong because I very strongly believe that traveling opens up lot many windows in our mind without our knowledge  at that time  came across Manali-leh highway in Facebook my very first thought was trying out cycling in this highway... As I researched about this Cycling came to know that many number of clubs were organising cycling and every year hundreds were doing this. So, my next thought was why shouldn't I take a walk in this 500+ Kms crossing 5 high altitude passes then I started working on this. My plan was to reach KHARDUNGLA in 10 day's and apply for a Guinness record.. but failed in that…

“It’s your road, and yours alone. Others may walk it with you, but no one can walk it for you.”

On 13th July I started from Bangalore in a train and reached “Chandigarh” on 16th July 2019. From there I reached Manali in a bus which took almost 9 hours.

With an intention to walk 500 +  kilometers and with a backpack load of  13kgs (along with tent , sleeping bag, Power bank ,2 ltr Water bottle, books, etc essential thing's) not just on a flat road or a thread mill but on the roads that are never ending which comprises deepest valley in the world and also engulfs two world’s highest motorable pass. Meeting complete strangers on the way that included bike riders, local villagers, Indian army servants, road workers  who were extremely very kind to me in all the ways and on all the days

Journey Begins  from  Manali to Khardungla 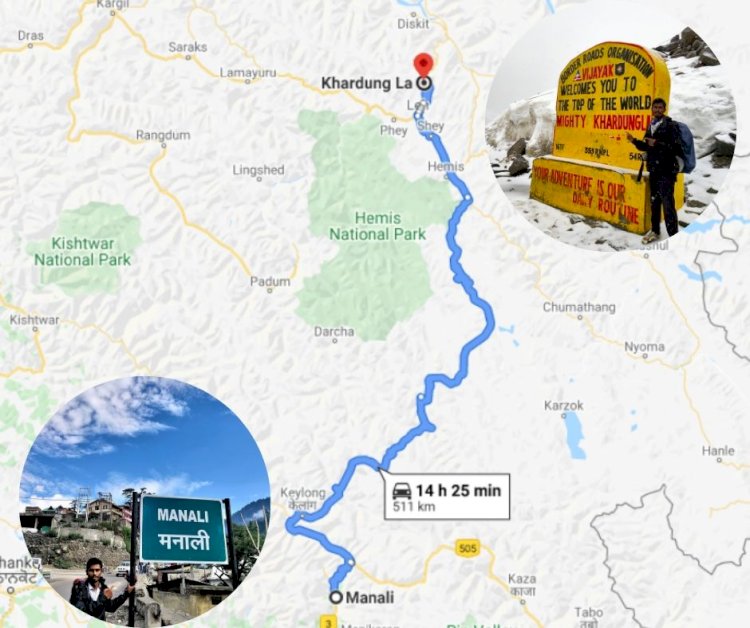 Day 1 After getting down from bus having breakfast there I immediately started walking in the Manali-leh highway without giving a time for acclimatization also.. this made more tired as my body couldn't adjust then I also I walked till marhi inspite of cold weather and small drizzling also (in josh) which is 35kms from Manali and camped there..

Day 2 crossed rohtang pass (13051 feet) and further went till Sissu village which was 51 Kms from marhi... After rohtang the route for 22kms was downhill and saved almost 7kms by taking shortcut (which was more dangerous then walking on road and tiring also) across the snake like roads on this day I had a slight fever and my shoe mouth also opened up with some injuries.. it was  good to play with the local people in sissu 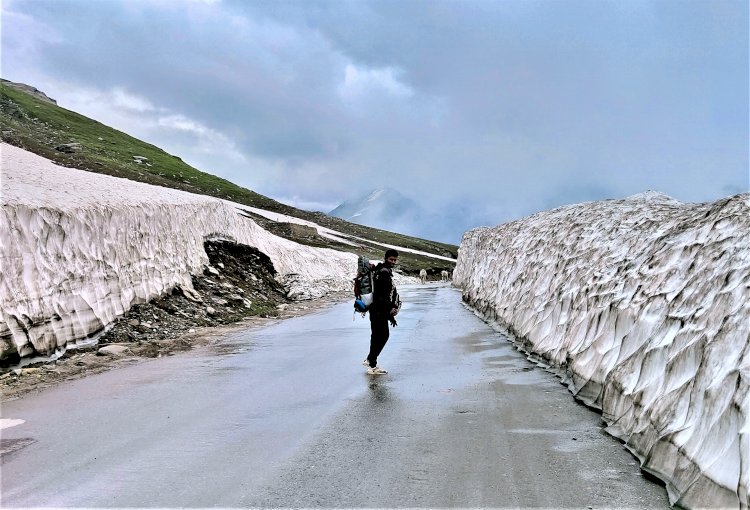 Day 5 I walked upto  zing zing bar , after reaching got to know that there is one more upper zing zing bar (6 Kms ahead) reached there and played cricket with the locals. As next day was challenging because I had to cross Baralalcha pass in cold weather

Day8 I crossed lachungla pass and went till pang in those dusty roads took some rest packed my lunch as It was around 4:30 thought of reaching debring (19km from pang) in moore plain and started towards it but couldn't make went for 12-13kms and camped somewhere there beside road

Day 9 I thought of reaching Rhumtse. After crossing Tanglang la it was full downhill here I took a easy shortcut route which saved me almost 9km but couldn't make it till rhumtse I camped somewhere behind rhumtse on that day

Day 10  Knowing that I could get cellular network back if I reach Upshi (no signal after darcha) which was around 35kms from my point I rushed towards it in full energy and finally entered network coverage area after 5 1/2 day's..... Moved for more 9-10kms reached karu, halted there

Day 11 Started from karu, enroute visited Shey Monastery - One of the Monasteries in the region and reached leh city. Stayed their for that night

Last and final day woke up early and started to walk towards KHARDUNGLA  after walking for 11 hrs 37kms and experiencing sunny , cloudy, rainy,  snow fall and i finally made it 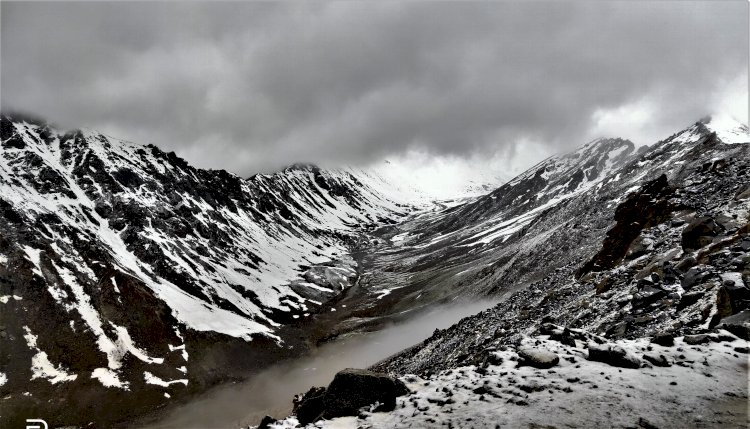 Not even in my dreams I imagined something like this would happen ever in my life. I always thank all the people whom I met on this journey because each one of them had some or the other things to give or tell a story of their own life which was a biggest learning for my life

Hardships that I went through...

I must proudly tell you that I have walked the great Himalayan trail not one or two but 512 Kilometers over a period of 12 days. This gave me an opportunity to walk through the best scenic beauty of Mother Nature, Mighty Himalayan mountain views that I am not able to imagine even in my dreams which also allowed me to walk through the world’s highest motorable road -

Never I wanted to settle for anything less that would question my own status at any given point of time in my life by Personality. Passionate about Outdoors. A Trekker and Explorer.A Engineer by profession. In 2017 is when I touched Himalayan range for the first time in my life which changed my life thereafter in an unimaginable ways. In 2018 did a motorcycle (moped to be specific -Honda Dio) tour along with my fellowman during which I traveled a distance of 7000 kilometres touching 3 countries that includes China, Bhutan and Nepal. This bike trip went into the pages on India book of records that made me to start pushing myself beyond my own imagination. Hunger to push my own mental boundaries, made me to walk the great Himalayan roads of 500 kilometres crossing 5 high altitude passes all the way from MANALI to KHARDUNGLA within 12 days without any backup vehicles and the best part about this walk was that I did it all alone in 2019. That helped me to dream bigger than I could imagine myself and inspire the fellow mates around to push their own comfort zone