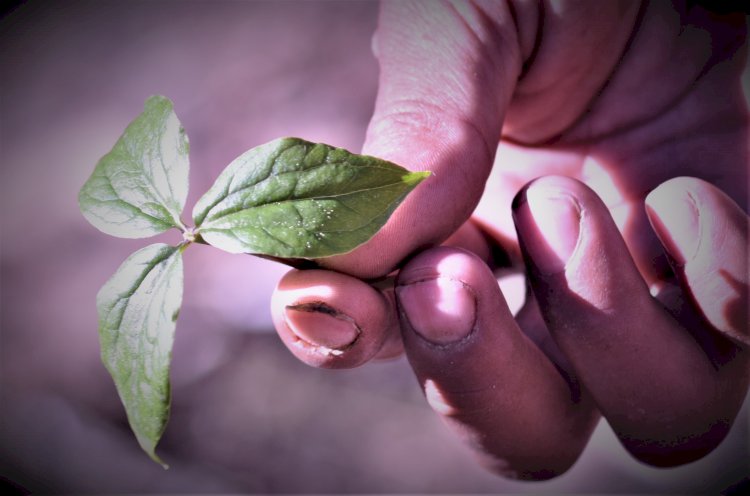 It was while descending and walking through the pine forest after kopru during my visit to high altitude lake Kanasar and Baradsar  in Harkidhun Valley ; Uttarakhand.  I heard about this and fortunate to see this a rare medicinal plant with the help of  Mr. Aravind Bihst our porter.Having seen other medicinal plants and heard about their medicinal value I was eager to see it and know more about it..

Nag – Serpent  and Chatri – Medicinal plant .In sankrit  Botonical name  Trillium govanianum is popularly known as Nag chatri, is an endangered plant species from Himalayan region. It is a robust, trifoliate herbaceous plant species with deep red and green coloured flower on the axis and is found in the vicinities of Himalayas especially in India, Nepal, China and Bhutan at an altitude of 2700m-4000m.
This herbal species is unusual in that the sepals and petals resemble each other, giving a six-petalled appearance with a central inconspicuous purplish brown flower borne at the apex of the stem and surrounded by leaves. The leaves are broadly ovate, acute, three in number with a conspicuous petiole). The underground part, tuber, of the plant is the key material of trade It is reported to contain trillarin and is used in preparation of steroidal and sex hormones Grows to height of 3 -4 Inches approximately. Roots contain Trillarin, which on hydrolysis yields 2.5% diosgenin - a cortico-steroid hormone.
The cortico-steroid hormone isolated from the plant is used in various preparations like sex hormones, cortisone and allied preparation used in rheumatism, regulation of menstrual flow and the like. In spite of this it is also used in stomach related problems. ound in the altitude of 2500 to 3800 meter in the Himalayan region, nag chhatri's root is used to cure dysentery and stomach ailments especially in China where it has huge demand. With demand for rare and endangered medicinal herbal plant increasing in China and Nepal, the rare plant has caught the fancy of smugglers resulting into its large scale illegal extraction despite state government imposing a complete ban on it.

Due to its effective medicinal properties, the demand of this drug is high in the international markets.

Reports say that  the continuous smuggling of Nag chatri is reported from various parts of hilly regions. They sell it @ 1500 to 2000 a kilo. But are not aware of its medicinal use. They collect the bulbs & roots , then they dry it and sell it to Agents. There is a risk of extinction as the plant is uprooted from the base. I think Government should legalese the sale to help conserve the plant. It's urgent before its too late.

Continuous exploitation by poaching of this important drug from its local habitat of Himalaya is a bigger concerned globally in nearby future. More appropriate techniques towards its conservation and unabated despite ban of exploitation from the Himalaya can conserve this rare herb Nag chhatri.  Uprooting of the entire plant before seed setting is sure to hamper its regeneration. Though the  forest department in Uttarkhand, Himachal Pradesh, has imposed complete ban on the extraction of rare plant villagers bribe and smuggle these to eke out a living Finally, it is time for us to strategies our efforts to fulfil the obligation of Chang mai declaration of 1988 “Saving plants that save lives”.Though nature has bestowed on us so many divine herbs it is we should make use it properly.Failing which the whole species may disappear forever.