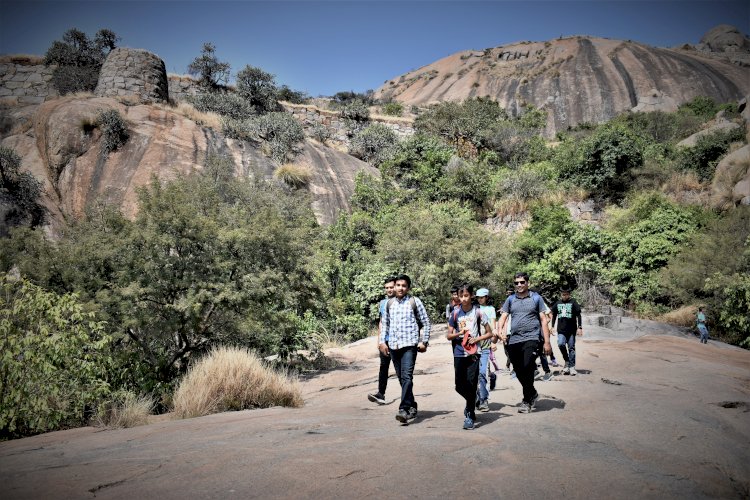 Among several ancient monuments dotting the Karnataka landscape, hillforts are perhaps the most attractive. Offering the scenic view of the surrounding areas, hill forts formed an integral part of defenses built by kings and palegars.

The fort at Huthridurga one among Navadurgas is about 17kms North East of Magadi taluk and  50 km from Bangalore, must have been invincible for the enemies. The thick vegetation that covers the hill locks impenetrable even today. A view from the base near the hamlet of Santhe pete shows the hills domination of the landscape. Indeed the hill is about 3074 feet above sea level.
Three gateways
Yelimaru Bagilu, Balikatte Bagilu and Magadi Bagilu, are the only points from where one can enter the fort from the gates a steep road Winds up to the fort. Climbing 1/3 of the hill and entering through Yelimaru bagilu, one would find the village of Huthridurga.
Kempegowda II the erstwhile ruler of Bangalore is being credited with the construction of the fort built in 2 tiers with steep slope facade on all slides, the slope towards the fort was full of thorny bushes and shrubs. There is also have beaten path used by covered for grazing cattle.
The first defensive structure a door way with circular bastion, is located on the west. Through the initial climb appears to be easy the pathway is strewn with thorny growth's all the way a making it dangerous for the climber following the pathway the second and third defenses can be reached.
The next stage of the ascent proved to be challenging as steps are carved out of rocks and was steeper. The fourth bastion could be reached after a tough climb near the circular bastion lie a watch tower and another flight of stepper stairway leading up to fifth. The sixth and the topmost defensive structure as just two pillars nearby there is a granary a pond, the Shankareshwara temple and a 50 feet high garudagamba.
Believed to have been built during the reign of Immadi Kempegowda, the rock inscription near the sanctum sanctorum probably belonging to the 18 century says Kempegowda ruled Savanadurga and Huthridurga from Bangalore till 1728. A small climb from this place reveals the forts exterior walls. The gamekeepers gun houses small palace and a tank called Akka Thangi dhone are also visible. Tanks and ponds in the hills gives us and Idea of water supply was well managed in those times.
There is also huge grinding stone around 112 cm in diameter probably used for grinding flour the place called Kempegowda hajara where kings and palegars believed to have kept their valuables and money for safekeeping shows signs of plundering by treasure Hunters over the years. The large rock behind the structure called Gadayi kallu or Aane gundu (as it resembles an elephant) was used as a natural watchtower. It is also said that palegars hoisted their flags here.
Spectacular view
The rock offers a spectacular view of the landscape punctuated with fields, lakes and winding roads appearing like thin ribbons stuck on the ground. From the ramparts of fort one can glimpse smaller in hill locks like Olagadhare, Huliyurdurga, Thirumale devara Betta and Savanadurga known as rock climber’s paradise.
The fort would certainly interest nature lovers, rock climbers, historians and Acheologists, but it is highly regrettable to learn that awareness about the place is abysmally low among many of them.
The structures are crumbling unable to withstand the vagaries of nature and measures to protect the monument is urgently needed. In the era of adventure and ecotourism Huthridurga's credentials as a hill station , as an weekend getaway and as weekend trek from Bangalore must be seriously explored. Improving bus facilities from Magadi could be a positive initial step 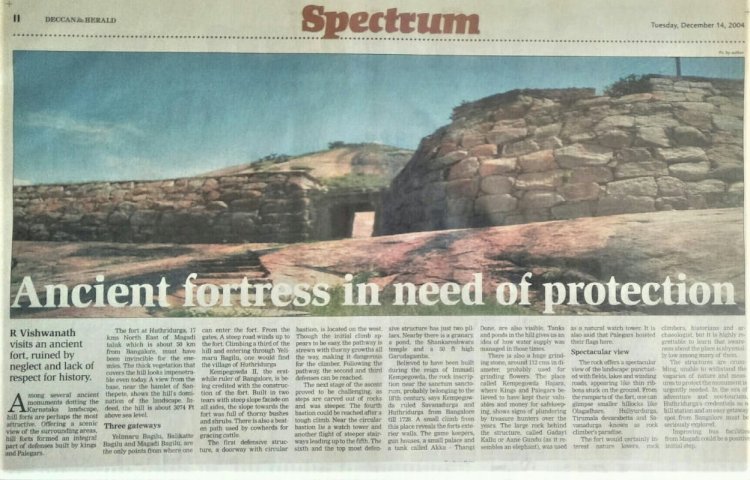 White Water Rafting – A Thrilling Experience to cherish for a Lifetime