The Himalayas known as the abode of snow is home to unique plants, flowers, and herbs having high medicinal values. The herbs found here been used extensively in preparing ayurvedic drugs. Panja is one such plant with high medicine values found in high altitudes of Himalayas 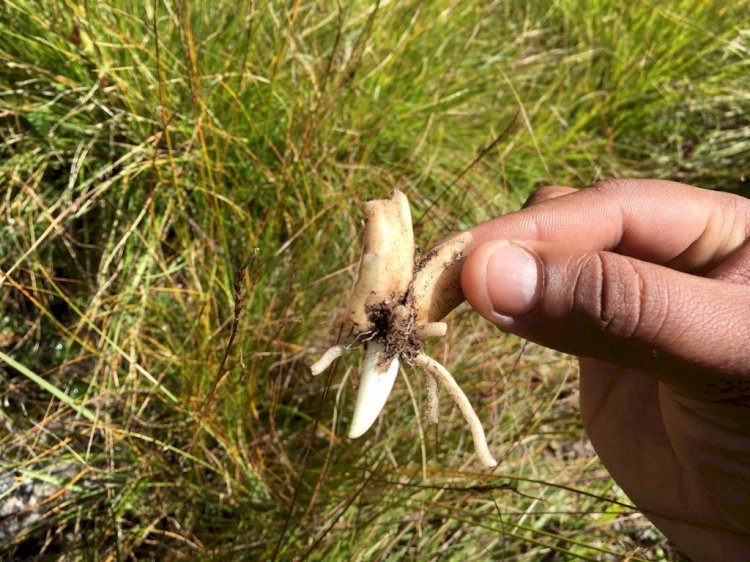 We had bypassed Harkidhun valley, Marinda Taal, and were in the midst of  Vast valley and heading towards Ratha - do campsite during our trek to High Altitude Borasu pass 5320m in Govind National park in Gharwal region of Himalayas. A group of Villagers from Puoni and Osla villages including women folk armed with picks were busy in collecting some stuff in the bushes. The valley was lush green, in a riot of colors with Himalayan flowers Geranium, Inulas, Impatiens, Bistorta, and Erigerons in full bloom. Inquisitive to know  I hiked up and found one of the folks stuffing a root of a colorful plant whitish in color resembling ginger into his pocket. Upon inquiry, he said it is called as Panja in the local dialect and told that it is used in treating injuries.
It is a well-known fact that plants having medicinal properties is both boon and bane for the Park’s floral biodiversity. The boon comes in the form of abundance and diversity of beautiful flowers in different hues, especially during the rainy season when the alpine meadows are lush green. The bane is that many of the herbs and shrubs of the forests and meadows are much prized for their medicinal properties. In the past, they were collected in small quantities for local use and have always been a source of traditional health care practice. Now modern pharmacology with better communications and the demand for natural medicines have made the collection of medicinal plants a lucrative trade
Panja is Marsh Orchid Dactylorhiza hatagirea  is a species of orchid generally found growing in the Himalayas, from Pakistan to SE Tibet, at altitudes varying 2,800–4,000 meters (9,200–13,100 ft). It is locally called 'Salam Panja' or 'Hatta Haddi'. It is called Panchaule  in the Nepali and Himalayan regions. The name 'Panchaule' (meaning 5 fingered hand) arises from its root resembling fingers of the hand with around 3-5 fingers of Orchidaceae family. It is an erect perennial herb with long flowering stems. The plant is well known for its medicinal value. The root has a sweet taste. The Juice extracted from tuber is used as a tonic and also used for the treatment of pyorrhea (inflammation of the gum & teeth). Root paste is externally applied as a poultice on cuts and wounds and the extract is given in intestinal disorders. The term Hatta Haddi is probably coined because it is used for treating bone fractures. As it is highly traded in the name of 'Panchaule' or 'Salampanja' and found in the wild, is being unscientifically collected for its commercial importance. Dactylorhiza hatagirea is native of the Himalaya. It is found throughout from west to east at temperate to subalpine biocliates within 2800 – 4000 m altitude. Flowers spotted rosy-purple in a terminal spike, borne on a robust leafy stem. It has palmately lobed root tubers, grows well in moist places, open areas, shrubland, and open meadows.
Dactylorhiza hatagirea is endemic to the Hindu - Kush Himalaya. It is categorized as endangered in the conservation list and strictly banned for collection, utilization, and sale. It costs around NRs. 10,000-15,000 per kilo as existing in the local market.
However, there is no way it can be stopped collecting though there are strict restrictions put forth by the forest department. Extensive collection for commercial purposes may result in the extinction of the species in the future forever.